Another 'Run O't Mill' Visit to The Woods

The weather this morning appeared to be much the same as it was last Sunday, so what better place to take Rex for his walk than Trinity Hill Woods. We arrived at about midday and as soon as we approached the usual Crossbill spot, there they were. They were actually on their way down from the trees for a drink. What great timing! I'd brought a scope along today 'just in case' and quickly set it up to try and get a photo of them drinking. It's amazing that they weren't in the least bothered by mine and Rex's presence. I couldn't get a good view through the scope however, due to the 'drinking puddle' of choice being in a ditch and behind some dry grass, hence this stunning result: 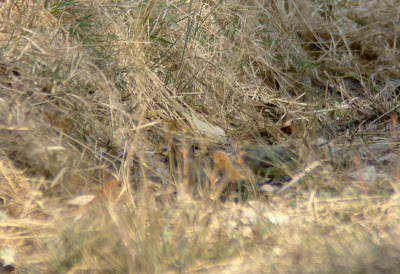 There are actually four of them in this appalling photo, you'll have to take my word for it though.
When I lifted my head from the scope, two more Crossbills were drinking on a puddle only feet away, giving amazing views! I'm afraid I absentmindedly missed the chance to count them accurately, there were at least six though, this time including two adult males.
Once they were back in the trees I did get a few better shots, it would have been hard to get worse ones! Here are (forgive the repetitive self indulgence, but I'm quite pleased with them) LOTS of them: 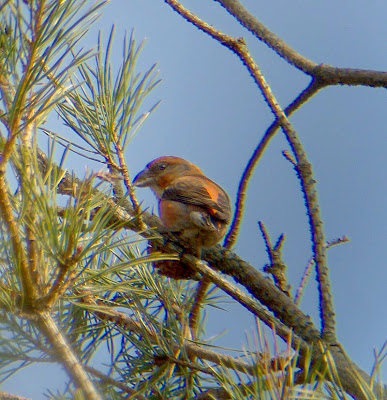 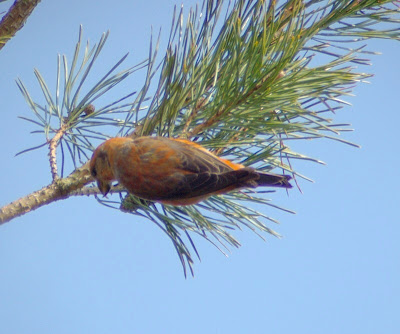 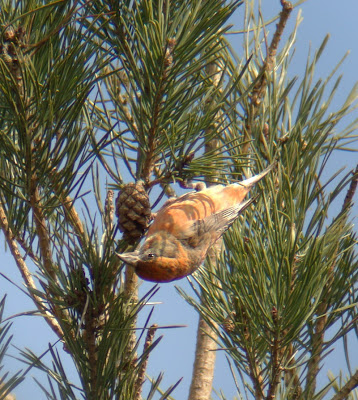 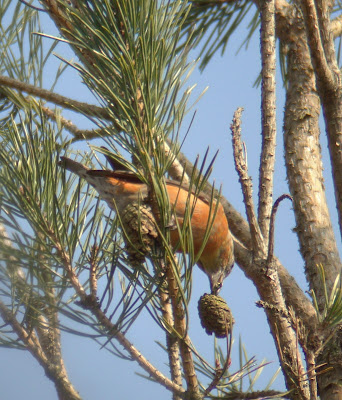 Just about to drop a pine cone (which isn't a euphemism!) 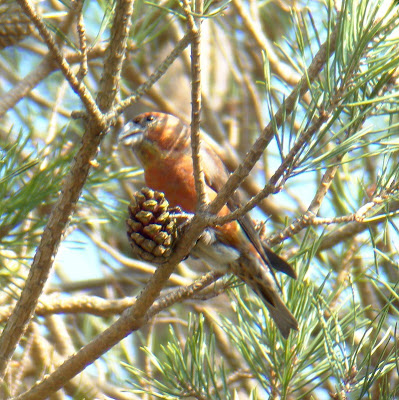 This second adult male was in the same tree. 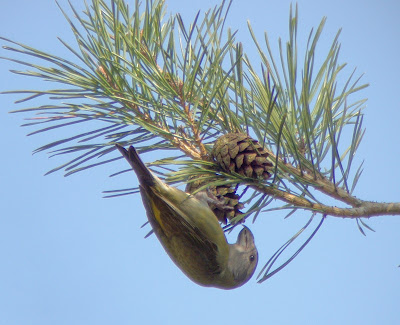 For equality's sake - a female too.
If anyone wants to go and look for them I suggest a still, sunny day, at around midday. Here's a helpful map of the area of the woods in which I've seem them on three occasions now.

Later, back at home I was having a cuppa in the garden when one of my regulars visited the bird feeders, a finch, but nothing as beautiful and exciting as Gav's temporarily resident Fringilla. A Fringilla non the less, but of the boring old Chaffinch type. She's been around for about five months now and has a steadily worsening case of Fringilla papilllomavirus (FPV). Last October it was localised on the top of one of her feet but today it's rampant! A couple of pictures of her below are definitely NOT for the faint-hearted or squeamish, it's HORRIBLE! 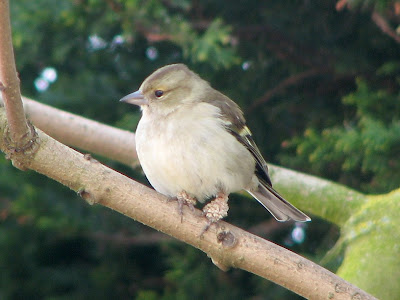 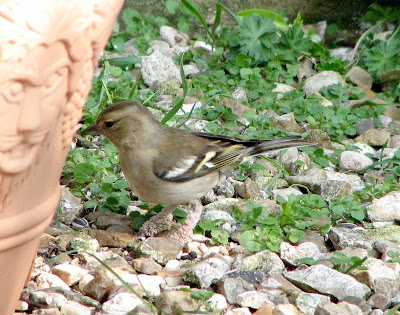 Enlarge this at your own risk. You have been warned!

Apparently they can live quite normally with this condition until it prevents perching, which doesn't look too far off in this case. It's nice to see that she has a mate though, despite her 'unconventional' looks.
Posted by Karen Woolley at 9:22 pm

cheers for the text, i got up there today but no luck, surprise, surprise! there were loads of siskins though. nice map!

Sorry to hear you didn't see them again Nick. Why do I only get good views of Crossbills when I'm alone!?

Perhaps I have a severe case of Loxiaostendosoliosis!