It's the very rare but totally bland looking Stinking Goosefoot. What it lacks in appearance it certainly makes up for in the odour department! It smells really, really strongly of dried fish. Culpeper, writing in the 17th century, describes the smell from the bruised leaves thus: “It smells like rotten fish, or something worse.” We tried and failed to locate it at Cliff Marshes in Kent but eventually caught up with it at Languard in Suffolk. We were exceptionally lucky too because just as we arrived at the car park we spoke to a chap who was just getting into his car to leave. It just so happened he was a very knowledgeable local called Nigel and he kindly took us to see the only three plants that have grown on the site this year. They weren't in the special enclosure, as none had appeared there this year, and there's a huge area of suitable habitat so we'd never have found them without help. They weren't even within the reserve. 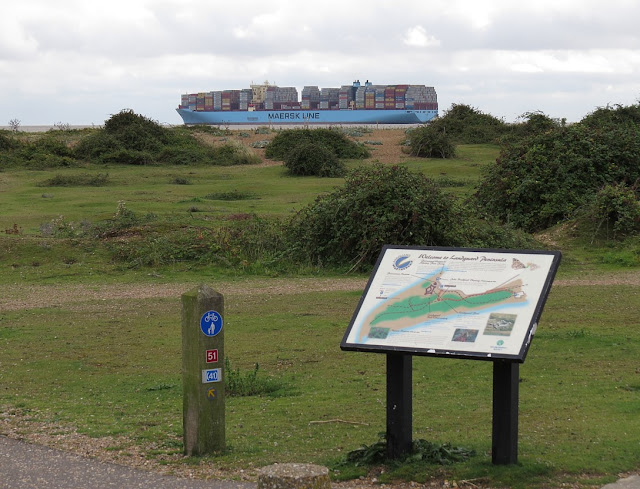 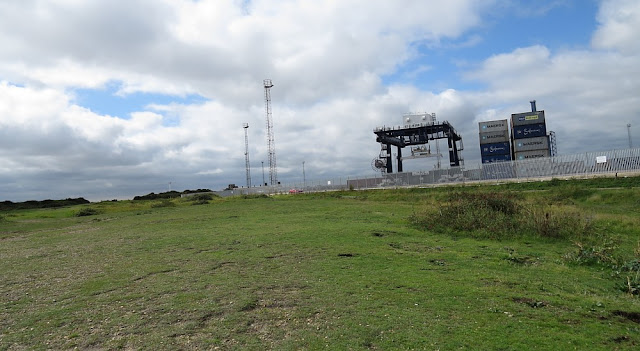 Stinking Goosefoot habitat.
It seems to favour rabbit scrapes with bare soil and lots of droppings, conditions that prevent many other plants from thriving hence there's little competition. Although there were lots of seemingly suitable areas only three plants were growing this year. One had been partially dug up by rabbits which is one of the hazards of growing on their toilets I suppose! At least the rabbits don't eat it. Perhaps that's why it smells so bad, so as to put them off, because it is perfectly edible despite the smell. 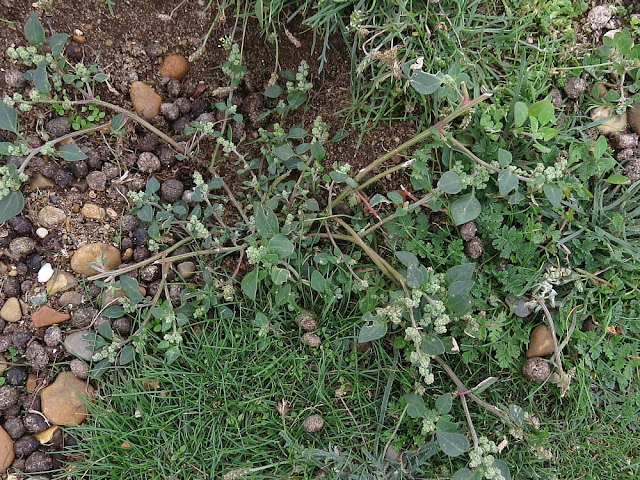 It's an inconspicuous mealy looking plant. 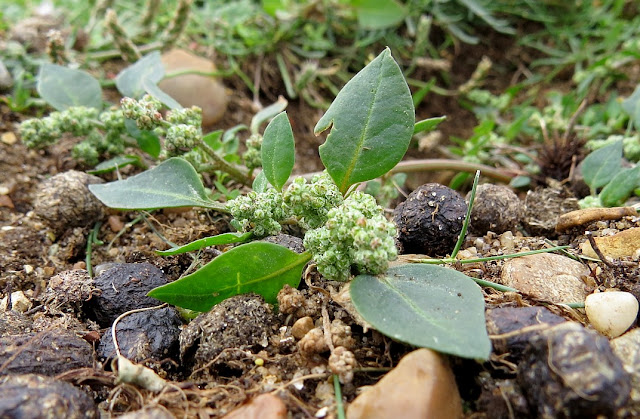 The flowers are inconspicuous too.... 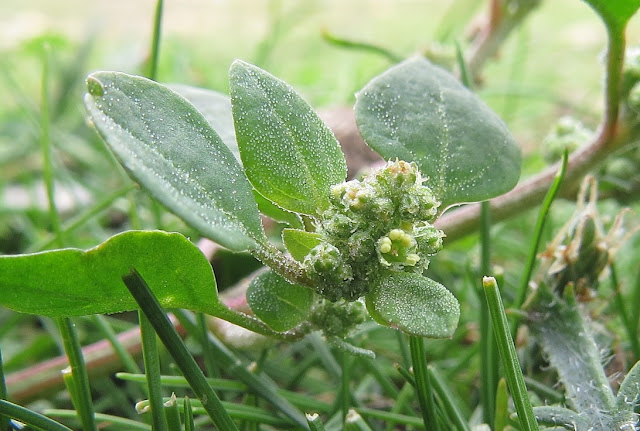 They are tiny and yellow. 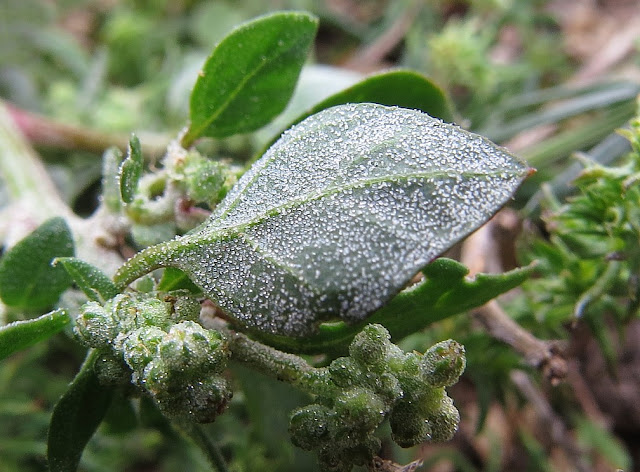 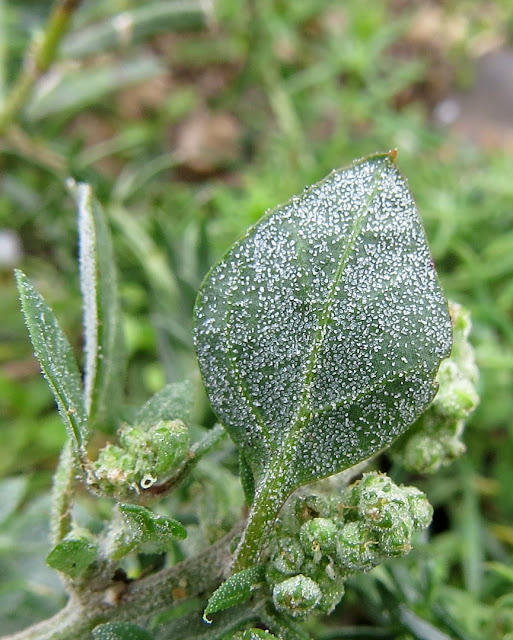 The whole plant is covered with these tiny white 'crystals' which contain the chemicals which cause the strong smell if they are rubbed. The smell is that memorable I can actually imagine I'm smelling it by just looking at these photos. 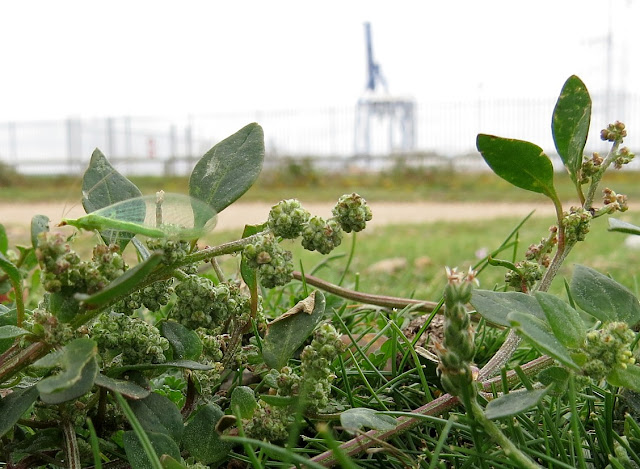 Great series of posts, Karen! Love the caption of the last shot.

Karen, I've seen this at West Bay. It used to be on the coastal footpath up by the golf course.

Thanks Steve, I'd read it was there, I don't know how recently? I'll probably have a look for it this year. We were in the south east at the time anyway so thought we'd take a look at Languard.

Hi Karen,
I'm really impressed with your blog, very professional and excellent photographs.
The chap you met would have been Nigel Odin - he is in charge of the ringing station which is the artificial hill where all the 10 & 12inch guns were positioned the seaward side of Landguard Fort.
The Ringing Station is now securely fenced off, but before, was part of the SWT Landguard Common Nature Reserve and I was the volunteer warden here in 1979-81. We were there mainly to protect the Little Tern colony, but sadly no longer breed here due to human pressure and the ridiculously placed caravan site at the other end of the common.
As always, it is dogs not being kept on leads which are the biggest problem and people see the big open space, ignore all the notices and release their dog/s to have a good run and consequently disturb all the ground nesting birds.
Regarding the Stinking Goosefoot - I was aware of it being present there but I have knowingly seen it.