A Walk Along The Coly and Being a 'Concerned Resident'

I took Rex for a nice walk along a very long section of the Coly yesterday morning, I was hoping to see a Dipper, so the more river I could cover the better. I left my car in Colyton and cadged a lift out to to Pulhayne Bridge, which is the furthest up the Coly one can get via public footpath and walked back to Colyton. Things didn't go according to plan from the very start when I realised I'd left my bins in the car in Colyton. Doh! This was going to seriously curtail the birding! I then realised that bringing Rex along was a big mistake. I have seen Dippers on several occasions with him tagging along, but that was when he was on top form. He's getting so decrepit now that he was a bit of a hindrance to say the least! My chances of seeing the elusive Dipper dropped drastically when I realised that he wouldn't walk into any undergrowth or rough grass (some sections of the River are obscured from view from the footpath). Why wouldn't he? Because he can hardly see now, he's completely blind in one eye and has tunnel vision in the other one so I suppose he doesn't like getting prodded in the face by sticks and brambles etc. I know I wouldn't! I couldn't go into the scrub without him either because he gets lost if he ventures more than about 20ft away from me because he's quite deaf too. Things got  even worse when we crossed a footbridge and his leg fell through a gap in the planks. He developed a bad limp and I had to carry him for some time until he seemed able to walk on it again. When I did eventually relent and let him off his lead for a bit he proved that his nose was working just fine and proceeded to hotfoot it (yes he ran) across a field, nose to the ground, in order to roll on a purifying Wood Pigeon carcass! Needless to say I wasn't too pleased when I then had to carry him over the next rickety bridge! I didn't see any Dippers, I haven't seen one on the Coly for a while now, but it was a pleasant walk non the less and I saw a few nice birds even without my bins including quite a lot of Song Thrushes. Also a bit of spring colour from the plants. The massive highlight  being a beautiful carpet of Wild Daffodils. 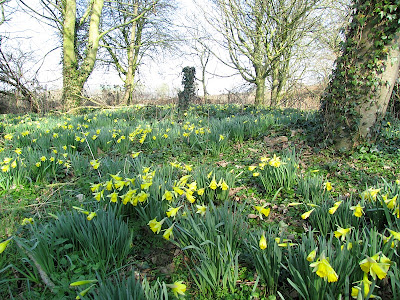 For oft, when on my couch I lie
In vacant or in pensive mood,
They flash upon that inward eye
Which is the bliss of solitude;
And then my heart with pleasure fills,
And dances with the daffodils.
(William Wordsworth 1804)
I like this last verse of the famous poem best...I lie on my couch a lot! ;-) 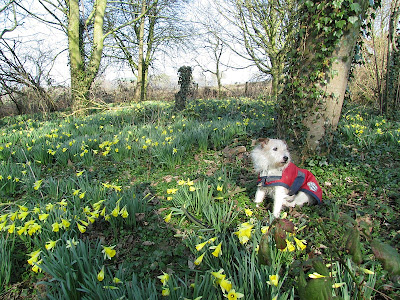 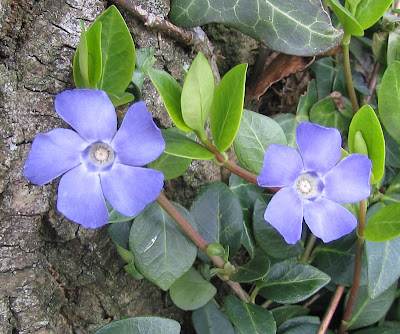 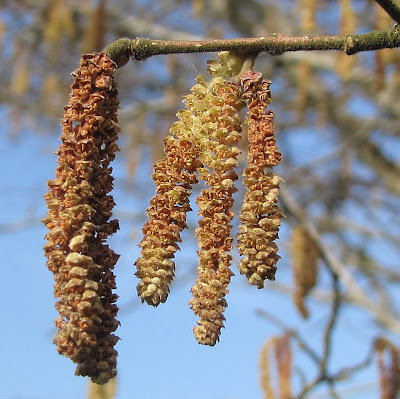 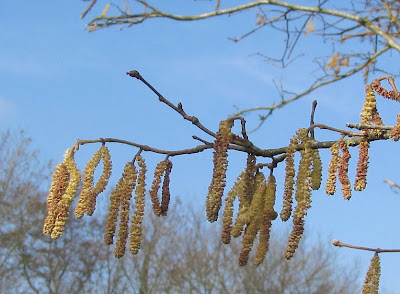 At the tip of that bare twig you can see the female Hazel flower,
which is very small indeed but close up... 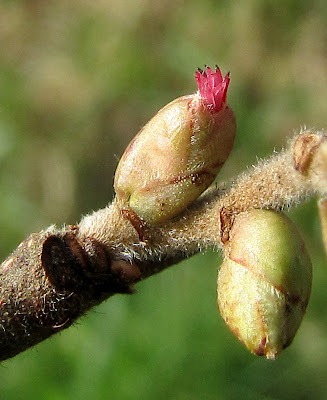 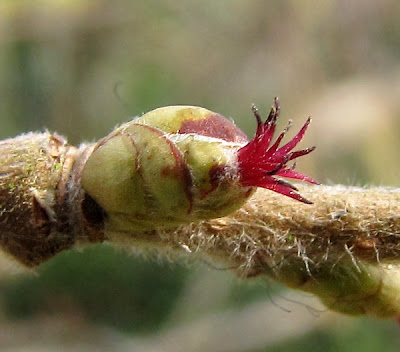 .. is a striking vermilion affair.
You can see pollen on the stigmas here. 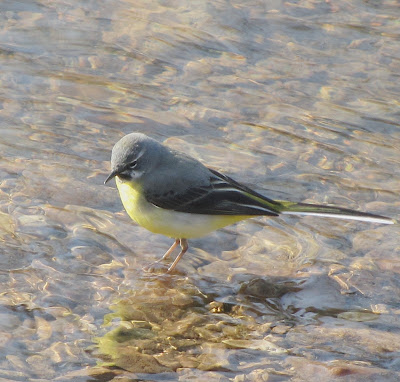 There were very limited opportunities for bird photos,
the super-zoom managed an unexpectedly decent attempt at this Grey Wagtail though. These are a really hard bird to get a really good photo of, I haven't managed it yet! 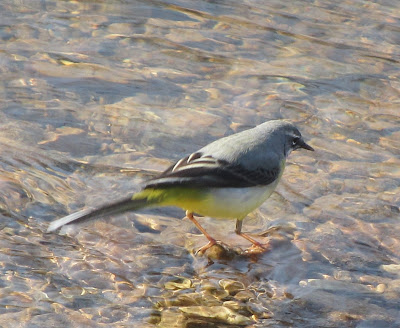 Got the wagging tail nicely out of focus here...but I like the way the sun is shining right through the legs, you can see the bones; they're so thin!!
In the afternoon I had a look along the estuary where there wasn't anything new to see, but there were some more colour-ringed Black-tailed Godwits. I was expecting to see them because on Saturday morning the Axe Estuary Ringing Group caught a good few of these along with the usual catch of Shelduck and Wigeon. They also caught a couple of Canada Geese! And I wasn't there! Typical! Last time I attended the cannon netting there were more ringers present than birds caught, therefore I felt a bit like a spare part, with little to do. Every time I can't make it though they catch oodles. 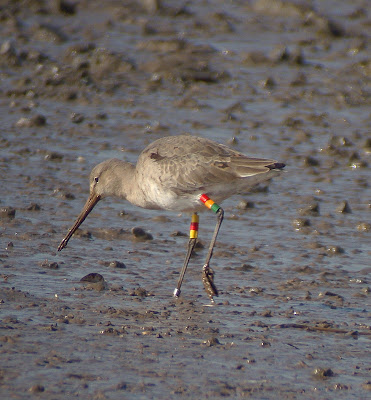 Ones to look out for.
This one's ROG (red/orange/green)
The yellow/red/yellow on the right leg is the AERG code. 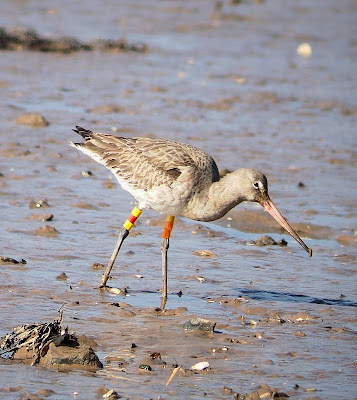 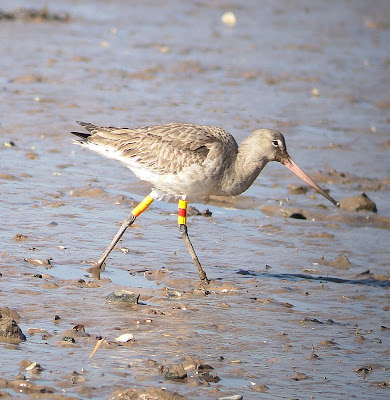 Ttis one's YOO.
I don't know how many they colour-ringed but I could see four yesterday. 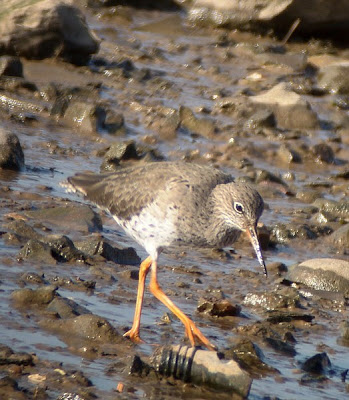 Here's a Redshank who seems to be examining a piece of black plastic, which looks like a connector of some sort. Being made of black plastic chances are it's a MCS Napoli relic, probably a BMW part. They're still found all over the place even after four years.
Over on Not Quite Scilly Gav mentions the Tesco superstore soon to be built in Seaton, which is going to be on the site of the old Holiday Village. He refers to the anguished cries of 'concerned residents'. He may well scoff but some of us have reason to be concerned, not with the "the triple curses of a cheap and convenient supermarket, the first town-centre petrol station for years, and some employment opportunities" no. But we are concerned about this. 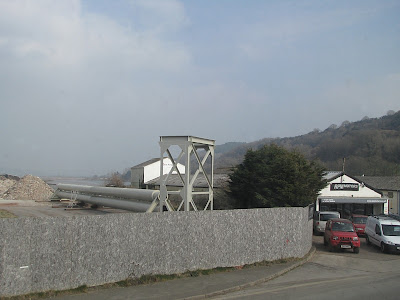 Tesco are bring in squillions of tonnes of gravel to raise the ground level on the below sea level site, and they're bringing it in from barges out at sea through a giant metal pipeline. This will be crossing the road about 10 meters away from our house. Here's one of the towers which went up today, behind it is the section of pipe which will span the road. 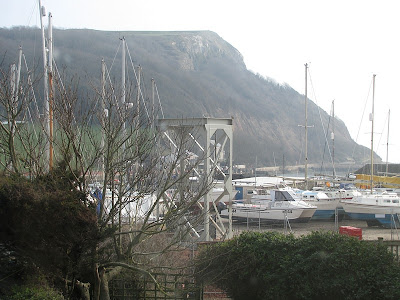 Here's the other side, from my bedroom window, it wont look very nice but that's not our concern. It's the noise and vibration of tonnes of gravel thundering through the metal pipes we're worried about. What's that going to sound like? Not to worry say Tesco, it will only be as loud as an HGV passing your house at around 30mph! That's pretty loud actually, some of them shake the house as it's very close to the road.The difference is that the pipeline will be pumping in gravel for up to three hours at a time. And despite assurances it will only be during the day they changed that once they'd got the permission so it could be at night too. Oh well, it will only be for a month or so. Providing we don't get any rough seas which of coarse we more than likely will. 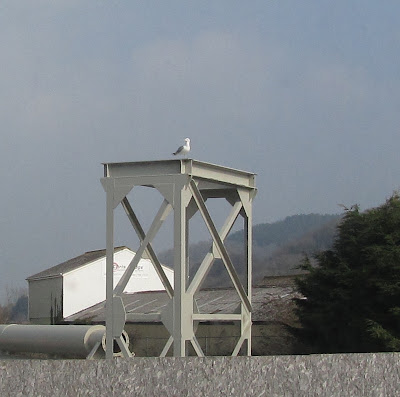 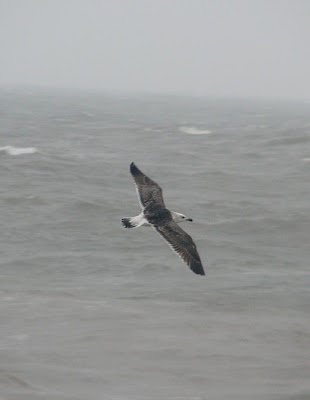 Lets hope the sea stays like this or rougher for the next few months, or years even ;-)
Posted by Karen Woolley at 3:24 pm

You have a nice blog! I would love to follow up:)