I did try somewhere different yesterday morning but it was so rubbish, I had a sulk and didn't take any photos! Oh, except one! I saw this possible genuine vagrant from India, which might find it's way onto my list come December along with my probable Grey Phalarope (when I suddenly remember that clinching feature) especially after this morning's events. 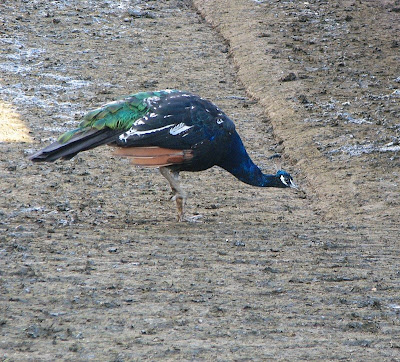 A year-tick in waiting
There wasn't a lot happening on Axe Cliff this morning (always worth going though coz sometimes there is, SEO for example :-)) and there was a very cool northeasterly wind. I counted 12 Wheatears, 50 or so Meadow Pipits a flock of 11 Siskins, 200+ Linnets 10 Skylarks, 3 Goldcrests, 4 Chiffchaffs and a couple of Blackcaps. Also a few other flyover bits and bobs that I couldn't identify! :(

You may be pleased to hear there were absolutely NO golf ball ticks either! 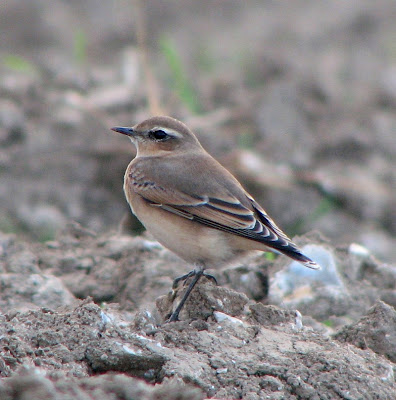 Wheatear number 3 (I actually lay on the ground to take this - don't ask me why!)
Fortunately for me my daughter, Martha, decided she wasn't well enough for school, thus excusing me from courier waiting duty and enabling me to race down to Colyford Common where a second Spotted Redshank had dropped in, I took along my waders so that I could run out there and flush it, but on arrival was disappointed to see the hide jam packed full of Spotted Redshank admirers, before too long one of them was Gav, enjoying a jammy year tick (Spot Red is usually a singular event on our patch) apparently with an enigmatic sigh! ;-)

This bird came a tad closer at times than the last one and I managed to get a couple of recognisable digiscoped shots of it. The second one shows quite a bit if detail ( if opened) amazing for a Colyford Common Scrape shot!! 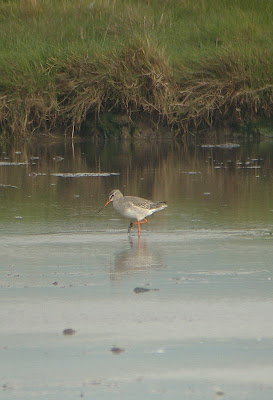 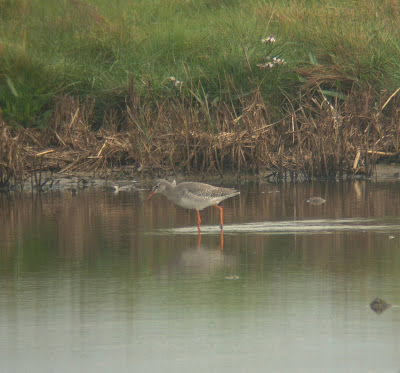 .......amazingly a bit less blurry
Nothing else new on the scrape but Gav and I hung around a while hoping for our overdue Honey Buzzard or Wryneck or... something. Over at the Farm Gate we could see Steve, also hoping to see a Honey Buzzard, most probably. We decided to try and digiscope him even though it's 'miles' away. Here's one of my efforts - He's seen something, don't know what it was, but it wasn't a Honey Buzzard :( 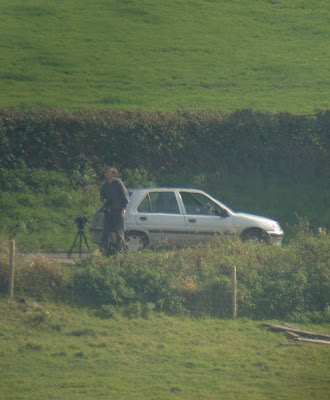 Crikey what's that!!
Oh and guess what, the courier didn't turn up again. He took the package back to the sender. Looks like I'll have a few more days stuck in this week, it'll give me chance to write the 'a bit about me' kind of interesting* post I've been trying to get around to. Watch this space. It'll be exciting* stuff!


* no guarantee of interest or excitement
Posted by Karen Woolley at 8:41 pm

There is a possibility that the Peacock may be a captive bird (the occasional one is) - even I would be hesitant before ticking it.

You must have got that nice photo of the Spotshank before the merciless heat haze set in. I can't think of any other reason that it's 10x better then mine!

Puts it in the same category as Pheasant and Red-legged partridge then No!?

Yes,quality Spotshank purely due to atmospheric conditions, the sun hadn't come out yet. There was absolutely NO talent involved whatsoever.:)