I spent all morning at home after an extremely long lie in, then I decided to walk the dog at Morganhayes again, my excuse (as if I need one) was that I wanted to find out what species of tree the Crossbills were feeding on. Every time I've seem them/some they have been eating the cones of this particular species. I have been calling it fir, but on my photos the cones looked all wrong for fir and were more like spruce, but the leaves didn't look right for spruce, not 'Christmas treey' enough!! I looked in my tree book and the likely candidate was the Western Hemlock-spruce (Tsuga heterophylla) an import from North America. The clinching feature is a double white line on the underside of the needles, so I needed to go and get a close look at some, which I did and here's a picture of that all important feature: 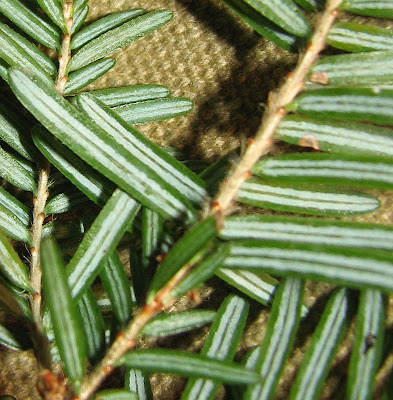 There's no denying its Western Hemlock-spruce.
I was in the wood for an hour and a half and heard the Crossbills again several times, saw one individual twice and also a flock of 4 in flight. They were very quiet while in the trees feeding today but exploded into frantic 'chupping' a couple of times as they were harassed by a female Sparrowhawk. Here's a snap I got of the perched one: 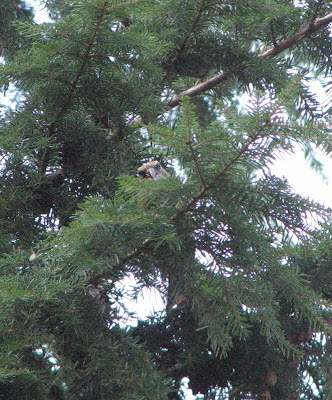 Not at all easy to spot 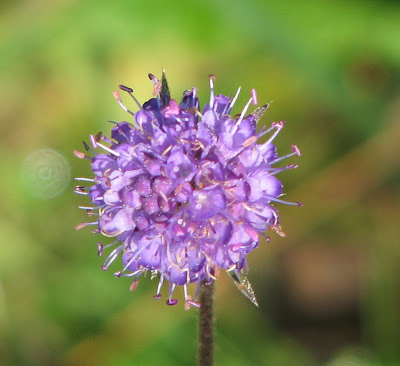 How did it get such a strange name? Here's a snippet from the 17th century Gerard's Herbal explaining it:

'The greater part of the root seemeth to be bitten away; old fantastick charmers report that the divel did bite it for envie, because it is an herbe that hath so many good vertues and it is so beneficial to mankinde'.

So now you know! This legend seems to have been very widely spread, for the plant bears this name, not only in but also on the Continent.

I also saw several Southern Hawkers and Common Darters along the tracks. Underneath one spruce tree I found a Tawny Owl's pellet, I brought it home with me and soaked it in water to remove the contents, a real blast from the past, I'm reliving my childhood! I found a few interesting bits and bobs but am going to get my microscope out tomorrow and study them in more detail. I may try to take photos through my microscope too, having never tried it before, you never know it may work!

Later in the afternoon I had a look from my bedroom window with my scope hoping for another house tick. I was in luck! A Ruff was visible with some Blackwits at Coronation Corner. I was hoping for a Med Gull too but couldn't pick one out today, I am sure several have flown past my house on their way out to the roost last winter but I think spotting one on the estuary will be the easier option. The Osprey was still fishing on the river today for it's 15th day!! I not only saw it from the house again but got a fuzzy digiscoped photo too: 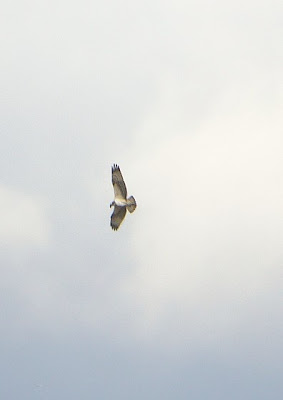 What else did I see from the window? Well I saw this graphic example of irrisponsible dog ownership!! 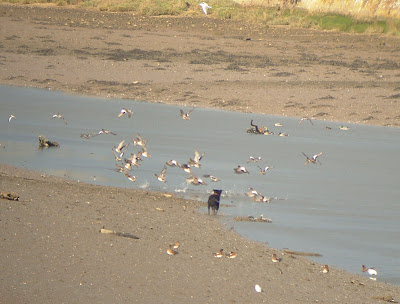 "Just let the dog terrify the Wigeon why don't you?"

I also saw a Steve Waite, he was very distant, (believe it or not Coronation Corner is just over a kilometre away from my house, I didn't believe it til I measured it on the map) but you can see all the clinching features, one hand clutching bins the other his camera bag, a general look of determination and a large white plaster on the inside of his upper arm!! Unlike me, sitting in my cosy warm bedroom, Steve's actually been out burning up the habbo, which his why he finds many rarities and I don't. 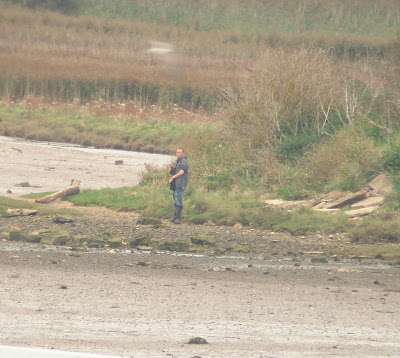 I soon went up to Coronation Corner to see if he had seen anything good, whereupon he told me of the 'mega rare' Pochard at Bruckland Ponds, so off I popped for a quick look, very nice it was too and not even a yeartick. I took a snap of it of course: 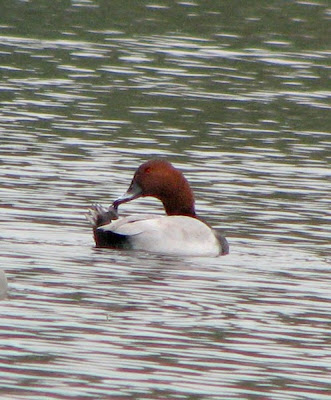 Finally at around 5:30 I went down to Colyford Common again, there was a bit more water on the scrape tonight but not many more waders. I went to the platform and looked over the new reedbed. There were two Water Rails on here but I only got fleeting glimpses of them. I haven't had a good view of one all year and am determined to gt a nice photo of one some day. Today I made do with digiscoping a Snipe, I'm quite pleased with the result as it was taken with a piece of barbed wire in the way, which doesn't show up too badly in the finished article. 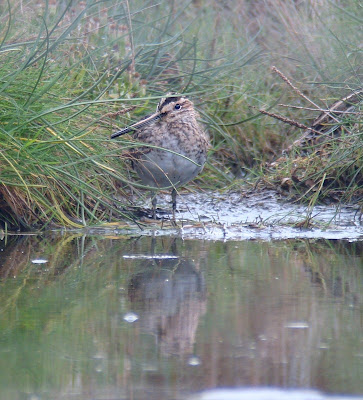 Common Snipe
After a while I was joined by Gav, we didn't go looking for a Wryneck tonight as Steve was already doing this for us. So we just leisurely sat back and missed the Cattle Egret which Steve saw flying south! Seriously though we didn't see it pass us! We were hoping it was roosting at the Borrow Pit with the local Little Egrets and rushed down there in the last minutes of remaining daylight. There were indeed plenty of Egrets there, but all too soon it was too dark to find the odd one out! Pants!:-(
Posted by Karen Woolley at 10:34 pm