A Nice Surprise in the Woods

I haven't had time today for any premeditated birding but the dog still had to be walked. I had left it very late and set off for Morganhayes Wood at around 3:30 only a little over an hour before I needed to head off to work. I had decided on Morganhayes because it had become a very warm and sunny afternoon and being a bit of an anti-social misery guts I new that here I would be away from the crowds. I was right, it was deserted. Great! I nearly didn't walk the whole length of the track due to a lack of time but I'm glad I did because just as I approached the far end I heard a faint but instantly recognisable 'chupping' Ooh Crossbills!! 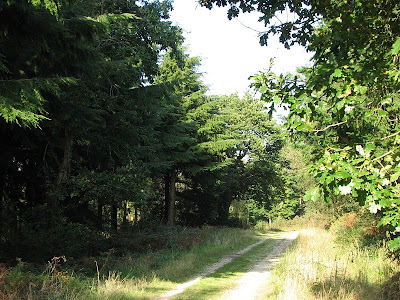 Boring old woods, with a faint 'chupping' sound coming from the last fir tree on the left.
This is where they were, in the last fir tree along the track. I couldn't see them at first as they were hidden within the thick foliage of the branches. I could see and hear lots of cones falling from the tree as they fed voraciously. Eventually they appeared on the visible side of the tree. I estimated there were at least eight of them. I didn't see a very red male this time but there was a young one just beginning to acquire some red plumage. I tried to get some photos again but they were so high I really had to crane my poor arthritic neck. Every time I got one in focus it was facing away from me, and everytime I lowered my camera to relieve the agonizing neck pain one or more would sit perkily on the edge of a branch and laugh!! I got a few shots, they're a bit grainy though as my camera, in it's wisdom, kept setting itself to a very high ISO (who am I to argue). I may have managed to do better if I'd had more time (in fact I'd have fetched my scope) but I stayed for far too long as it was and had to go to work without having any tea first. Hungry and distracted (thinking about the lovely Crossbills) while at work I managed to stab myself in the hand with a carving fork!! Ouch!
Here are the best of a bad bunch: All except picture one show face- stuffing in progress, the last one is the young male, he's stuffing his face too!! 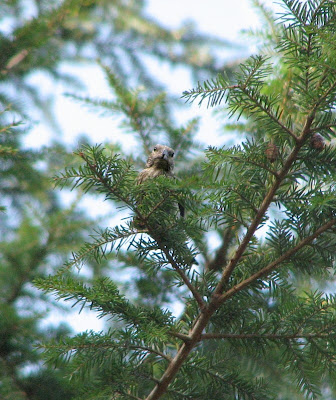 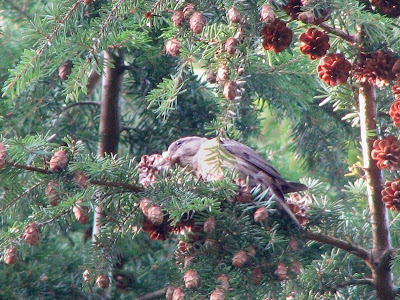 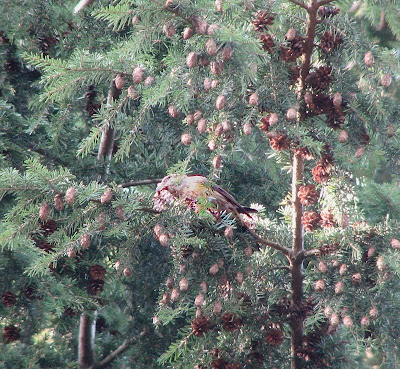 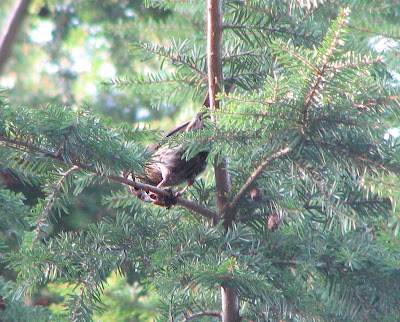 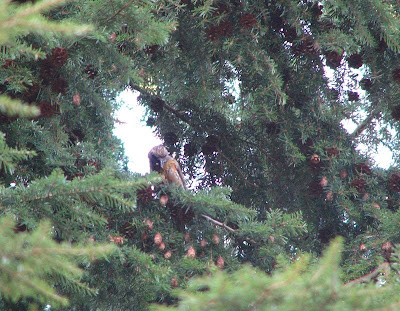 I had been thinking recently that we'd seen the last of these Crossbills because I regularly visit Morganhayes and hadn't heard a peep or indeed a 'chup' from them for ages. I'm so glad they are still around, I reckon this means they'll stay for the winter now! I know a couple of local patch year-listers haven't got them yet. I texted Bun but I think he was on his way to Lundy with Phil and I knew there was no point contacting Gav because he was out of town for the day on some sort of Crossbill avoiding mission I think! :-)

And here's a really bad video clip. Forgive the quality I was suffering for my art you know!! Perhaps if you listen carefully you can hear my neck cracking!!

My timing is clearly impeccable! Very, very gripping stuff. I might give them a chance to redeem themselves tomorrow afternoon.

Falling over. self-impalement. What next??!

No reasons why this can't be a different flock Karen, there are so many around this year. I'm sure this flock is not made up entirely of the same individuals that you saw here last month.

I think Phil and Bun have counted Crossbill already on their ropey yearlists, after hearing a distant 'jip'!