Predictably, yesterday morning Bun and I drove over to Gosport in Hampshire to see the Isabelline ( Daurian) Shrike. The weather was dull, dark and drizzly but the bird obliged on several occasions showing really well out in the open. Not as colourful as some Shrikes but superb to see non the less. Getting photos was always going to be a challenge, but I got a couple of okay shots in the end. I also remembered to take a few twitch photos too, for those of you who like them. 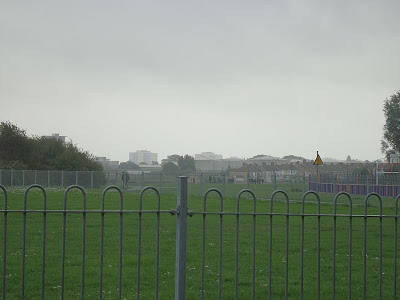 One of the less scenic twitches I've been on:
Looking toward Forton Lake from Grove Road, see the assembled birders in the distance. 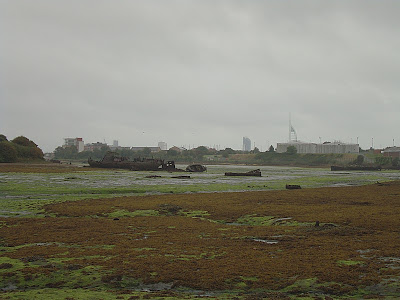 Looking out over the picturesque Forton Lake.
Just add water! 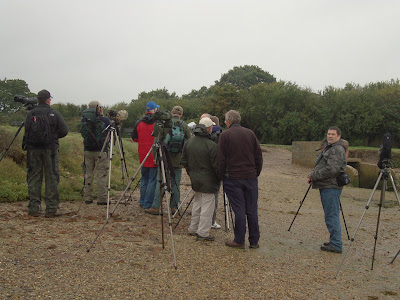 On the banks of the 'lake'. The Shrike was showing in yonder bushes. 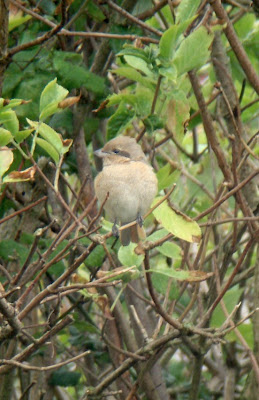 Like so. I had a lot of trouble getting my Sony camera to focus in the dull conditions, this being the only half decent shot I managed. I gave the Fuji F30 a try. I thought it was doing much better at focusing, but then realised why. I'd left the ISO on 1600 after using it indoors. So forgive the graininess  of the photos I got. 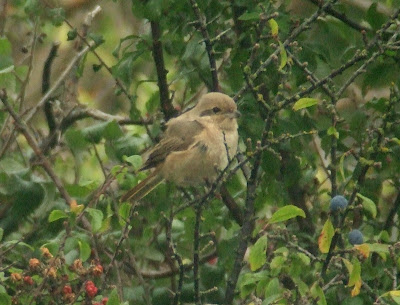 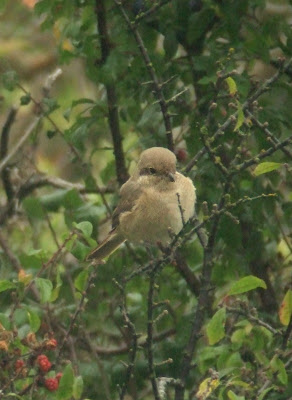 Isabelline Shrike. A nice peachy coloured bird.
Very cute. Though  I dare say I wouldn't think so if I were a wasp!
A bit of video, not really any better than the photos though. 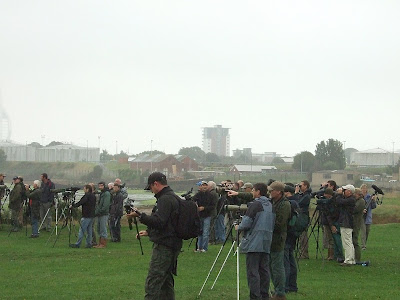 The twitch shot.
About a maximum of 50 birders while we were there I reckon.
Icing on the cake yesterday, was when I popped out onto the garden to check on my Guinea Pigs and noticed the Gulls going berserk. And yes, It was an Osprey! My first sighting of one for nearly two years, from my garden too. Excellent! It was pretty high by the time I'd gotten bins onto it ( I'd had to run indoors and upstairs to get them and back) I watched it become a speck as it drifted south and out to sea.
Late this morning a touch of deja vu. Bun phoned me to say James McCarthy had found a Wryneck. This time he wasn't even out birding but just leaving his house in the car. It was at the bottom of his drive, pretty tame and showing well we heard. Seeing as it was just the other side of Axminster ( about 6 miles away) we decided to go and see it. We didn't see it. It had vanished. Then this evening James called Bun again, It was back but a bit further down the road. This time we did see it, briefly at first in a bare tree before it vanished again for some considerable time before eventually showing extremely well on a grassy bank next to some garages. (Thanks James! :-) Looking forward to next Sunday's find) I got some nice photos after waiting a while for the sun ( which was behind the bird) to sink low enough. Also some video of it having a good old dig. 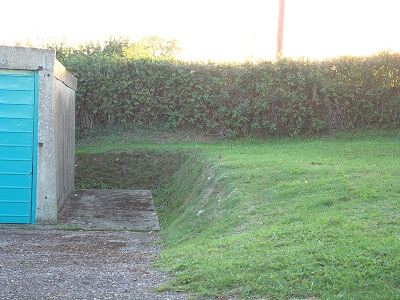 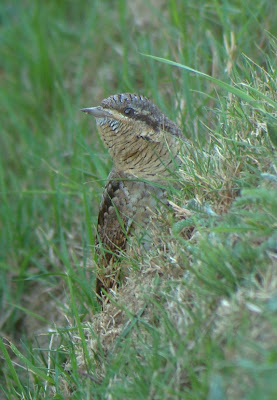 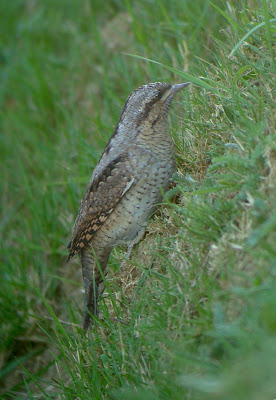 First on the steep bank... 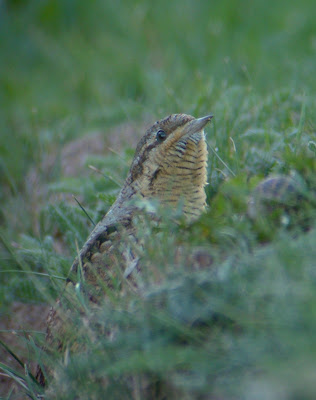 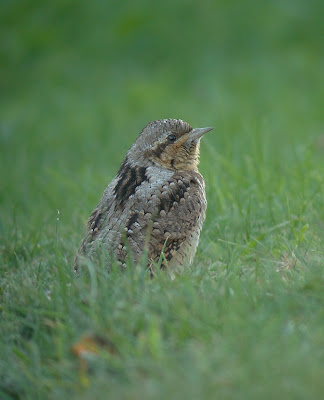 ...Then out on top. What crackin' birds they are!
While we were waiting for this to show we were missing a patch mega on Beer Head, a Corn Bunting no less!
I know which I'd rather see though.
Posted by Karen Woolley at 10:17 pm

Thanks Dean, it's easy to get a bit too self critical. I must try harder not to be! ;-)