I blame the hamsters ( updated version)

The hamsters which run around tirelessly in their wheels to bring Seaton its lightening fast broadband service have been slacking off of an evening of late, meaning when I've finally gotten around to blogging each night the service has been a bit on the hit and miss side. So I haven't bothered.  Nothing worse than spending ages over a blog post to have it mysteriously vanish when you try to publish it. It seems okay now, perhaps they've replaced the hamsters with the 'Ferrari' of  rodent power the degu!
Anyway I've got a weeks worth of  inconsequential 'stuff' to play with now so here goes. Last Sunday afternoon we travelled to Buckfastleigh in South Devon to see the scarce plant Deptford Pink. A plant which allegedly has never grown in Deptford!  The flowers are pretty small but are beautiful close up. 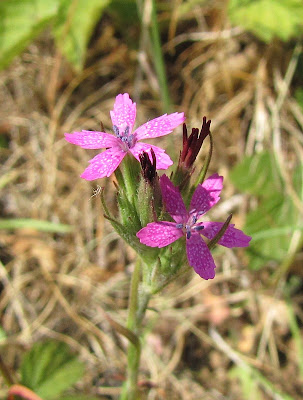 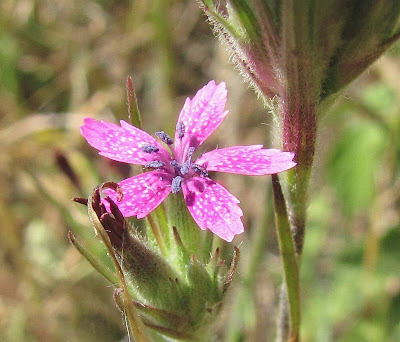 The lovely Deptford Pink which is now only found on 7% of its total historic area.
After Seeing the Deptford Pink we went over to Stover CP to look for  the dragonfly, Downy Emerald but dipped. What I did get here was bitten by something , don't know what but I was really under the weather for the next two days as my histamines went into overdrive!
Wednesday I felt much better and decided to take a walk along the coast path to Culverhole, quite a strenuous walk at the best of times, including a climb down the cliff with the aid of a rope! It was absolutely sweltering but I saw some lovely orchids and also a few Keeled Skimmers. The orchids I spotted here were Bee ( typical ones this time) Marsh Fragrant, Southern Marsh ( Var. junialis) and Marsh Helleborine. Added to the species I've seen on the top of the cliffs ( Common Twayblade, Early Purple, Common Spotted, Pyramidal, and Greater Butterfly) that makes nine species of orchid within half an hour's walk from my house, which isn't bad! :-) 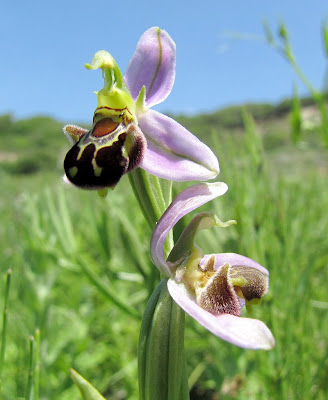 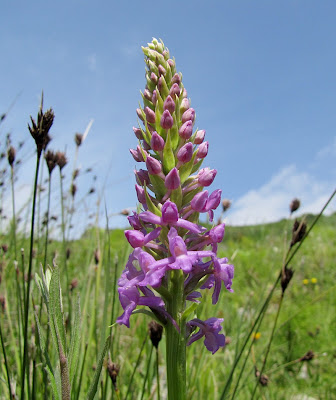 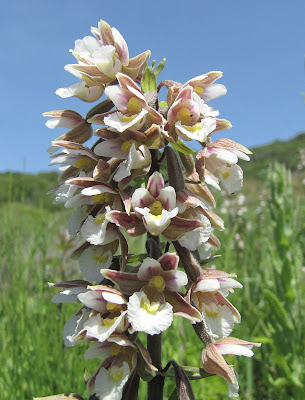 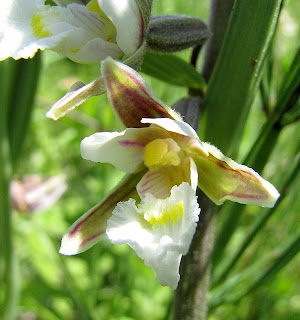 Marsh Helleborine, not rare but definitely my favourite orchid. 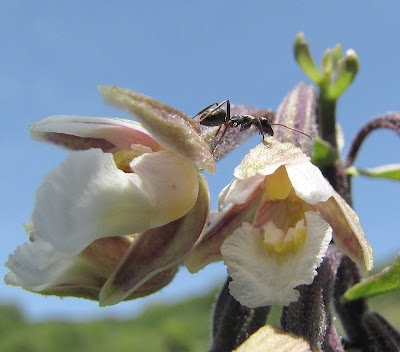 Beauty and The Beast
My climb up out of the undercliff and walk back to the car was much more challenging than I could ever had envisaged. The reason for this was this: 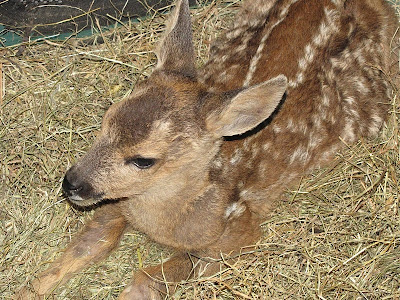 I found this Roe Deer fawn collapsed and exhausted on the coast path in the undercliff, there was no sign of his  mother, well there was an horrible 'smell of death' emanating from the undergrowth, which was most probably her. I knew the best thing was to probably just walk away, just in case the mother wasn't dead. I just couldn't do it though especially as the fawn was right on the path which is usually pretty busy with  passing hikers and dog walkers. I decided to carry it back with me. It was totally infested with ticks, i've never seen as many on one animal. I removed over twenty during the walk back to the car, but there were many more, some of them moving onto me, which was nice!!! :-(  It was sweltering in the car so I kept the fawn at home in the guinea pig's run fort a couple of hours until the weather cooled down a bit. I got it to drink some water which was encouraging, and then took it along to the RSPCA wildlife centre at West Hatch, thirty or so miles away.
EDIT: Can't believe I forgot to put this bit in but immediately on arriving home from West Hatch I rushed around to pick up Bun and we headed off for Abbotsbury in Dorset to twitch the Gull-billed Tern that had been there most of that day ( we had both been unable to go for a nearer one at Bowling Green Marsh, Topsham, earlier in the week). When we arrived it hadn't been seen for over an hour but it was refound flying up and down along the beach. Ooh goody! thought I, a nice trudge down the shingle ridge that makes up Chesil Beach, what a treat after my earlier exertions! It's like trying to walk through semi-set cement! Worth it though, we eventually enjoyed superb views as the bird made a couple of very close flypasts. A lifer for us both and bird number 299 for me ( not counting House Finch). I wonder what number 300 will be? :-)

Yesterday whilst taking a photo of this interesting looking caterpillar... 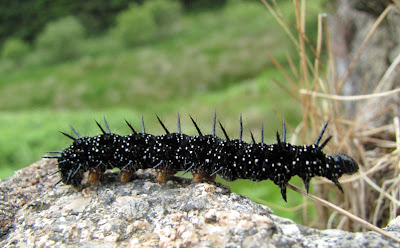 ..which turned out to be that of a Peacock butterfly ( I'd never seen one as big as this before, it must have been the final instar, looking for a pupation site), I inadvertently stumbled upon the nest site of a pair of Redstarts. The nest was in the wall that the caterpillar was on and both the parents had arrived with billfulls of  scrumptious little morsels for the lucky nestlings. I took a couple of photos before moving away and leaving them to it. Fantastic stuff, definitely my closest ever views of Redstarts. 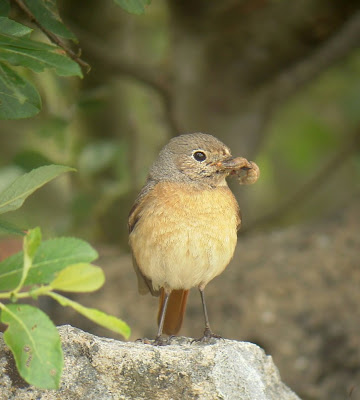 Mum with a nice juicy caterpillar... 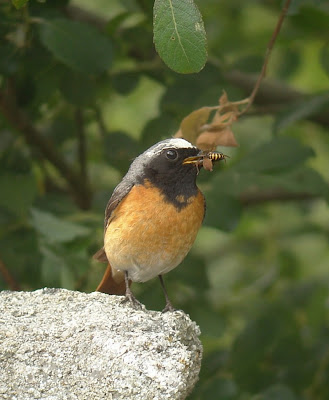 Dad with an equally juicy spider and WASP!
(click on it to enlarge for gruesome detail)
A few new moths during the week, nothing very exciting though. Not photographed were Sandy Carpet, Small Seraphim, Foxglove Pug and Dusky Brocade. 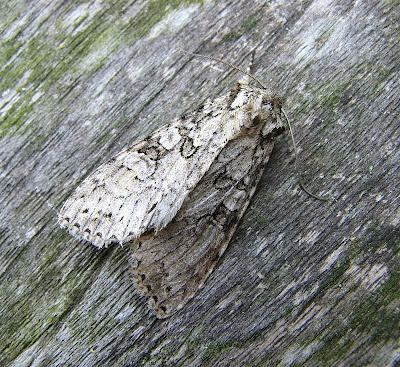 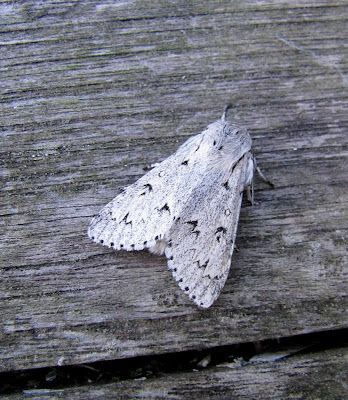 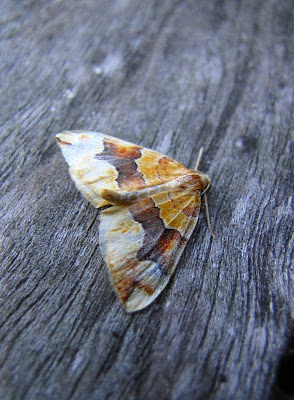 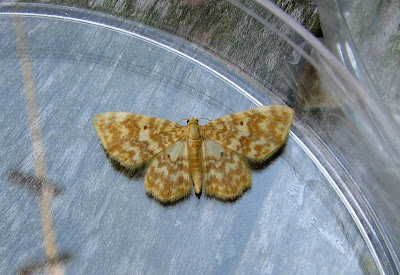 Small Yellow Wave
Phoned RSPCA this afternoon to enquire about 'Bambi'. The news was bad. He was euthanased because he was suffering from 'flystrike'. I hadn't noticed any maggots on him, I had looked but they were already inside his, let's say alimentary canal, you get the picture I'm sure, poor little soul, put a real dampener on the day that did. Still I'tried to help and that's all I could do :-(
Posted by Karen Woolley at 7:11 pm

Sorry your compassionate efforts for Bambi ended sadly Karen.
Amazing having such a variety of orchids on the doorstep.
The Redstart nestlings are on a spicy diet!

You saved the fawn from a slow, tormented death. Good on you, even if it wasn't the hoped for outcome.

Great shots of the orchids and redstart parents.

Thanks Rob and Wilma, Your right,it was worth the effort whatever the outcome. I'm so glad I didn't decide to leave it there.