Well nearly. After a mere six hour drive over to Norfolk on Monday evening, myself , Bun and Joe joined around a hundred others hoping to see and hear the singing River Warbler,.We heard it ( that was the easy part) and after a few short bursts at around 8.30 it began to sing almost continually from about 9.30 onwards but 'appeared' (poor choice of word there coz it didn't appear!)) to be doing so from within or behind a small stand of large alders. It certainly was an incredible song, very like a bush cricket and I'm pleased to have heard it. The song itself is better than the bird per se, which is after all  just another 'a small brown job'. I've got to be honest though, if I'd known I wouldn't actually see the bird I wouldn't have made the twelve hour round trip! A brilliant song's one thing but actually 'seeing it' coming out of the bird is something else! So instead of bird number 300, River Warbler is bird number 2 (on my heard only list). Oh well, perhaps next time. (she said  philosophically,through clenched teeth). I tried to get a recording of the song but the background noise was always too loud. This will have to do as a souvenir instead. 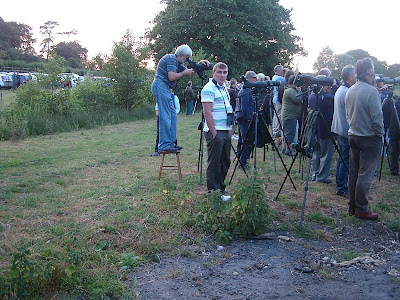 The customary 'twitch photo'.
I was actually getting a photo of the guy who brought along a stool ( good idea which I may employ in future) not that he needed it in the end. The guy next to him looks a bit concerned, perhaps he may be  worried that his likeness will appear on some blog or other for no apparent reason. He'd be right!! ;-)
On Sunday Bun and I drove down to Prawle Point in South Devon, for three reasons really, those being, Cirl Buntings, chance to see all of the House Finch, ( I didn't see its head when I saw it in Cornwall! :( ) and to actually see Prawle Point itself, neither of us having been there before. 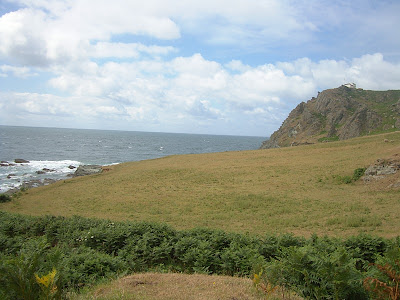 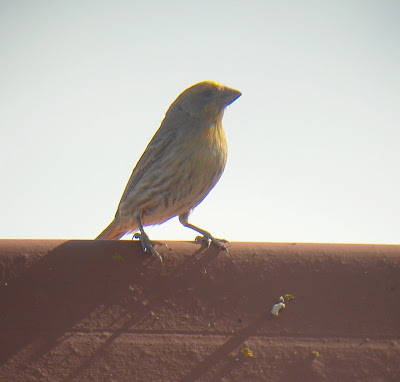 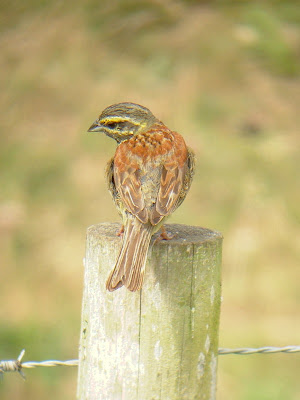 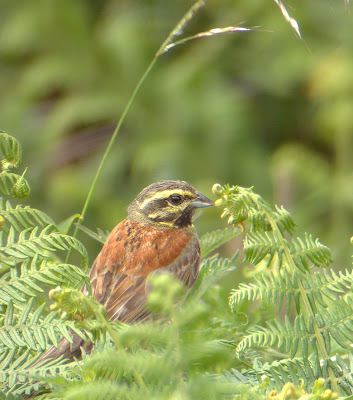 Cirl Bunting
Yesterday I nipped over to Radipole Lake to twitch another flower, a very rare form of Bee Orchid called atrofuscus. which has an entirely brown lip with no markings on it. I'm not entirely sure why some Bee Orchid mutations warrant the 'accolade' of becoming a named variety and others don't because they're within the excepted parameters for the nominate form. I won't be losing any sleep over it though! 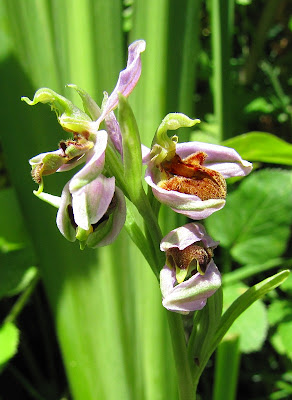