The Black-tailed Godwit flock was brightening up a rather grey and drizzly Coronation Corner this morning, they looked so lovely I just had to stop the car and admire them. Some of them were in full summer plumage and  just crying out to be digiscoped. My scope was in the boot, so I would have to risk flushing them in order to get it, I needn't have worried though because although as soon as I got out of the car all the Black-headed Gulls spooked and flew, the Blackwits just nonchalantly looked at me and carried on,  well, doing what Blackwits do I suppose. Most of them were asleep but while I was scanning though them looking for my 'victim' they suddenly all became very alert and jittery. I couldn't see what it was that they had spotted but something told me it was directly overhead.... 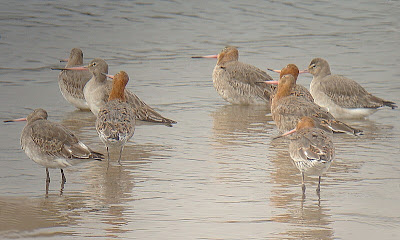 77.77 % of  these Blackwits, that's what!!
Three photos of the smartest summer plumaged one 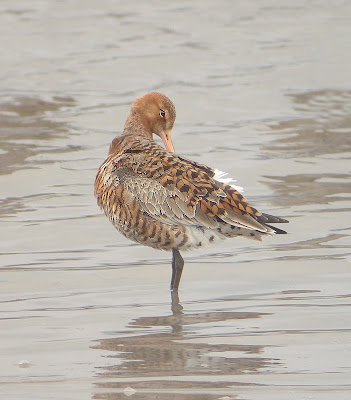 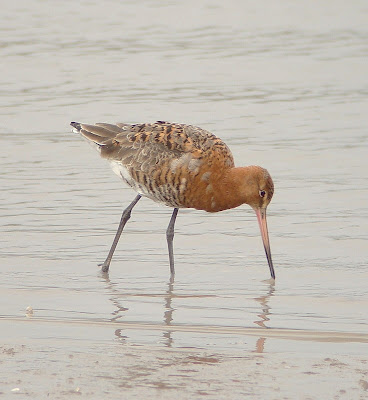 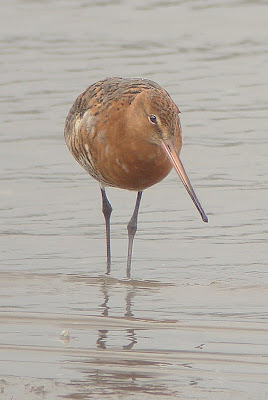 Very... Erm...Orange!
While I was busy taking these photos the flock was infiltrated by an imposter, He doesn't really have summer plumage, as such. He does a good line in breeding plumage though. 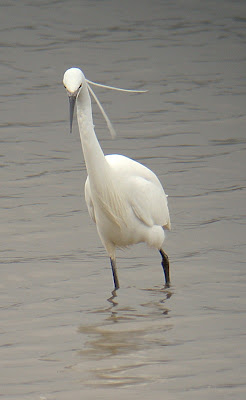 See!
Usually a 'nightmare' to photograph, gloomy conditions actually help with these :-)
Highlight of the day were some superb if very brief views of one of the Otters this morning at Seaton Marshes, unfortunately it chose to do a spot of fishing in the ditch right outside the hide at exactly the same time as Dave, the East Devon District Council countryside ranger, arrived to clear the vegetation from it. Still I enjoyed watching it for the minute or so that it took him to drive near enough to scare it off!  Any view is better than nothing though and well worth getting soaked out in the rain for too! Talking of which, the weather has taken a very unspringlike turn recently. I've had to turn the central heating back on. You definitely won't be seeing me in anything approaching summer plumage any time soon!... Perhaps by August ;-)
Posted by Karen Woolley at 5:18 pm

Great Godwit pics - makes me think of summer and Norfolk!!! Roll on sunshine.

When you talk of "your" summer plumage, do you mean something like that little black number you`re "nearly" wearing, on the boat photo ;-)

Thanks Phil, they certainly brighten the place up! ;-)

Dean - I think I'll call that my partial moult. A VERY rare occurrence north of the tropics! Sadly my 'summer plumage' probably only amounts to taking off my anorak! ;-p