Trinity Hill Crossbills and 'The White One'

I took Rex along to Trinity Hill Woods for his walkies again this afternoon hoping to get a better view of the Crossbills that I've been regularly seeing there. The weather conditions were ideal with just the lightest of winds meaning that I could spot the tell tale sign that Crossbills were feeding nearby, that being the falling seed wings from pine cones and as soon has I got to the usual spot this is what I immediately saw. A quick scan through nearby pines with my bins and there they were, not quite out in the open but visible enough to attempt a few photos There were at least four again and two of them were males. Whilst I was watching them a small flock of Siskins flew in and started feeding in trees recently vacated by the Crossbills, it seemed that they were taking advantage of the Crossbills efforts and searching the ready prized open cones for any remaining seeds. I really have a soft spot for Crossbills and can't imagine ever not being delighted to see them! :-) Rex however, thinks they stink. He was so-o-o-o bored with me standing around looking at at a tree that he walked back to the car without me in disgust! 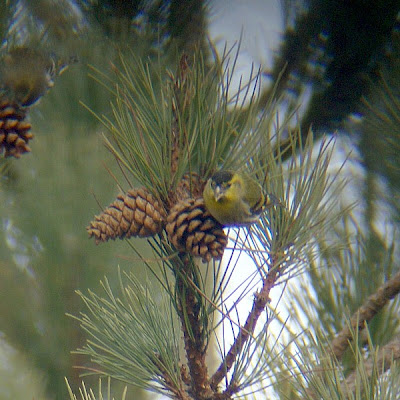 Siskin looking for an easy meal. 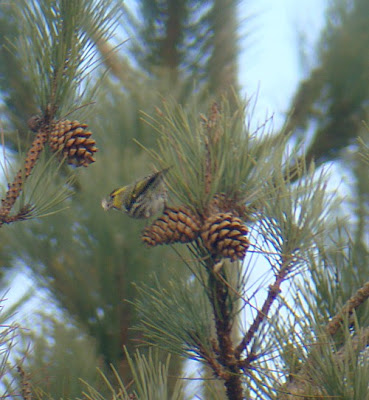 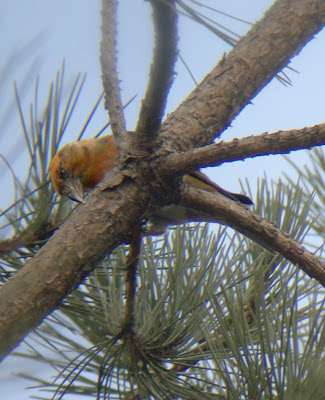 The male was playing hard to get and didn't once come out fully from behind the branches.
One female was showing well though... 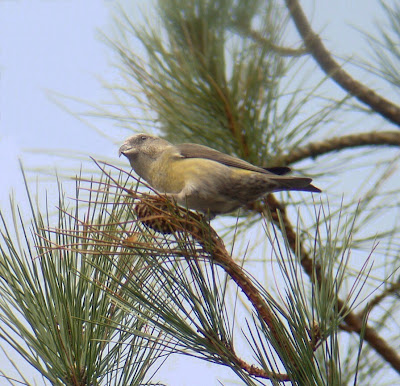 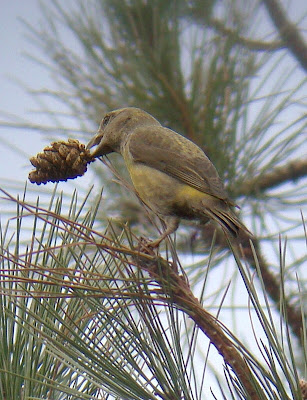 Later in the afternoon Gav spotted the unidentified white gull on the river, this time it was by the Tram Sheds so was much easier to view and take photos of. I rushed over there for a look not having seen it before. As soon as I did see it, especially when close up through the scope, I was certain it must be a leucistic Herring Gull. Why? Well, it just looked like one. Although somewhat small it had a mean brutish look about it, one that I've never seen in Iceland Gulls. The jizz just cried out "Be afraid, be very afraid, I'm after your chips!" And apart from that I also used the tried and trusted Robin-stroker's method of ascertaining whether or not it was an Iceland Gull, not by measuring the bill to primary projection ratio or contemplating the gonydeal angle, but by asking the question "Do I want to take it home?"  I didn't, it looked scary! 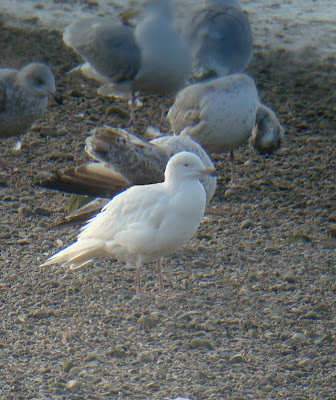 Leucistic Herring Gull or Iceland Gull?
Actually in  most photos, as seen here, the Herring-gullishness doesn't seem to show up as well as in the flesh (or feather?) 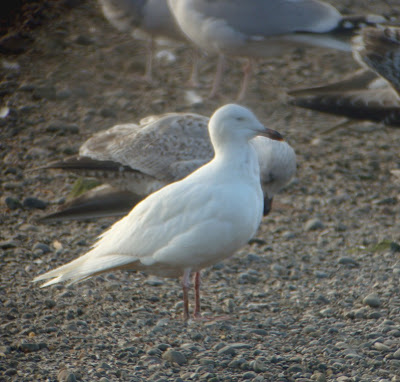 Check this one out though.
Although it's a bit blurred (that eyepiece problem again) you can see the bird looks
mean, mean, mean!
So it's Herring Gull (or Lesser Black-backed) for me. Then again I'm no expert, on gulls or anything else for that matter. Oh wait, that's not true! I am an expert on microscopic wood  anatomy. So why am I  cleaning a chicken oven for a living?
Posted by Karen Woolley at 8:56 pm

Herring Gull gets my vote Karen.