I haven't really had much to write about of late but haven't been totally inactive, well not quite. On Sunday I indulged in a spot of filthy twitching. Although I'd been very tempted by the scrummy  female Black-throated Thrush, who has been 'strutting her stuff' on the same garden in Yorkshire for about a month, I'm just not a hardened enough twitcher to drive the 13 hour round trip to see her. However, when Nick said he wanted to go and see  her and would drive from Bristol I naturally jumped at the chance. So at 3.15 am on Sunday morning I picked up Bun and Joe Ray and we drove up there to meet him, by 10 am we were in Newholme, North Yorkshire and by 10.15 we were looking at the bird. It showed well, off and on for the hour and a half we were there, moving between one of the gardens and a nearby field. The bird was very aggressive towards the Blackbirds in the area, a real little virago she was! I tried to get a photo but whenever she was still for any amount of time, it was while semi-obscured by branches in one or other of the small trees in the garden (see disastrous results below). We also had great views of a couple of Willow Tits on the feeders, exciting stuff for Southwest birders don't you know? Especially Nick as they were a lifer for him.
On the way home at the insistence of Joe, we stopped off in the West Midlands to look for a Green-winged Teal. We dipped. In fact Joe wanted to set off for the Teal about 30 seconds after seeing the Black-throated Thrush, and at the time he'd only seen its head! I don't know, the exuberance of youth eh? I don't mind admitting that although I enjoyed the day, I was shattered when I got home. Well worth it though, definitely! 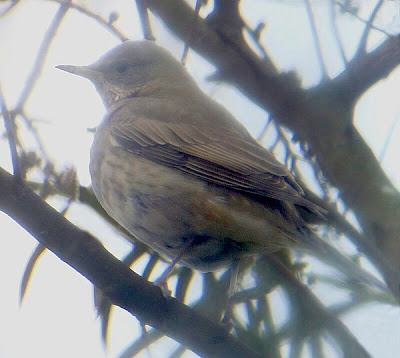 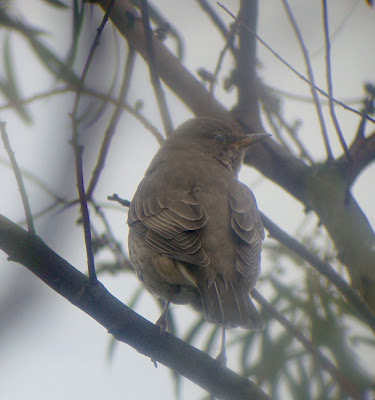 Little Miss Bossy
I feel somewhat ashamed of my lack of effort on the patch birding front of late, I've done little more than walk Rex at Trinity Hill Woods this past week, although I did see several Crossbills here on three occasions. I haven't managed to 'pin them down' in a tree yet, but will probably go back there for another look soon. I'm getting really fed up with the cold weather now, Winter just seems to drag on and on....
After reading about the male Black Redstart at Seaton Hole on Gav's blog this morning I made a special effort to haul my lazy carcass down there this afternoon, because male Blackreds are definitely 'worth the effort' . After I'd  returned home I read  on Steve's blog  that he'd seen FIVE Blackreds there this morning. There were only the two again this afternoon but fortunately one was the stunning sexy male. I hid amongst the boulders of the rock armour, cunningly camouflaged in my 'rock coloured' beige anorak and waited for him to approach close enough for me to get a photo with my ancient old Canon S3 super-zoom. Talking of which, brand spanking new super-zooms seem to be the flavour of the month with Steve and now Gav, acquiring the latest models. I've been longing to upgrade my S3 for Canon's flagship super-zoom the SX1 for over a year now but every time I save up enough pennies I end up having to spend them on 'essential stuff' you know, like bills! :-(
Never fear though, I have a cunning plan, which I've started to implement this very evening. I'm doing an extra hour a day at work, cleaning the chicken oven....Oh what joy!! I only have to clean it another 64 times and the SX1 is mine!
Anyway here are a few photos of the Black Redstarts taken with my trusty old 'living on borrowed time/soon to be seen on Ebay' S3. 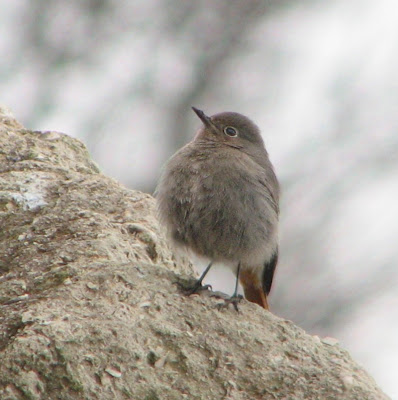 The confiding female, they are always much less wary than males. 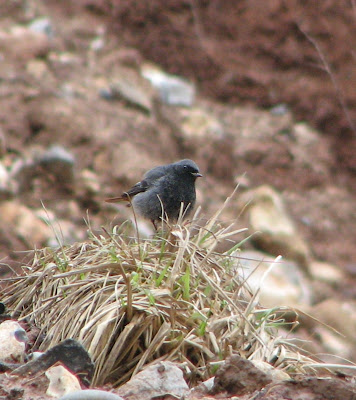 The gorgeous male.
Would he fall for my disguise? Would he come a little nearer? 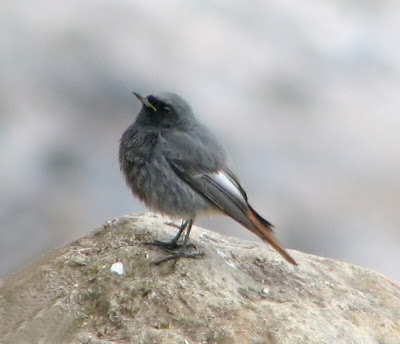