The slightly ambiguous title doesn't mean I'm giving up twitching, just that my birding activity has been much of a muchness with nothing really encouraging me to put finger to keypad. I suppose I should have done so on Monday really, when I actually got another lifer on patch with the Black-necked Grebe which Steve found off Seaton Hole. He phoned me with the news and I got over there as fast I could. While I was sauntering down the million or so steps which lead to Seaton Hole I was already fully aware of what I would hear when I arrived. It was just SO inevitable. As soon as I was within earshot of Steve he pronounced

" It's drifted out a lot further now!!" I got to see it in his scope and then, sometime later, found it in my own but I have to admit that it was just a Grebe shaped blob, I couldn't even make out any identifying features at 60x zoom! Obviously I trust Steve's judgement on the ID 100% . So, I have seen a Black-necked Grebe, but I haven't SEEN one if you know what I mean...? I'm not too worried about this state of affairs because I can easily go to Torbay and see one anytime I like (don't know why I haven't already really). If it had been a once in a lifetime lifer, like a Yellow-nosed Albatross for example I may have reacted a bit differently. In fact I'd have rushed down the yacht club and commandeered a boat!!

Most of the rest of my birding time has been spent dipping Firecests in Jubilee Gardens, Beer. I have seen the/one of the Black Redstarts on Beer beach though. I spent ages on Sunday trying to get a photo of one, I'm not sure why, I've already got hundreds of 'em! 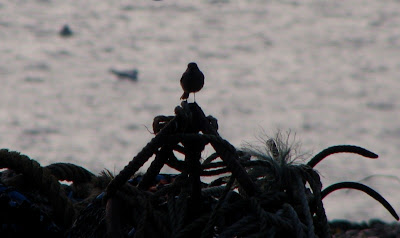 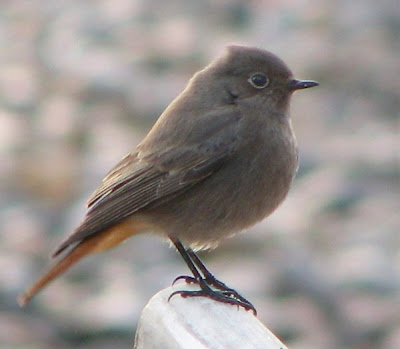 you can't have enough Blackred photos.

Today I fancied seeing a nice Dipper. I had two options.

1) Walk the entire length of the River Coly, very muddy, very tiring and chances of success slim, verging on zero.

2) Drive over to Lyme Regis and take a leisurely stroll along the River Lym, much shorter, predominantly tarmaced and chances of success. virtually guaranteed.

I saw two Dippers on the Lym, with one of them ( a singing male) about 30 feet from where I parked the car at Horne Bridge, which was nice. I was surprised that the Dippers here are just as flighty as those on The Coly. I had foolishly expected them to be much more approachable, being in a relatively 'built up' area. They did appear to take little notice of passing pedestrians as long as  said pedestrians didn't  point bins or a camera at them, or generally look at them! I managed to get close enough for a photo near to Horne Bridge because the road is a good eight feet or so above the river here and they don't spot you so quickly. When I say close enough I mean about 100 feet away!! 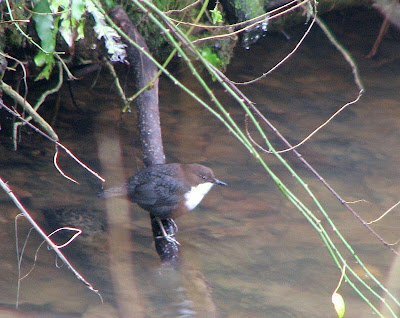 One of my best chances spoiled by grass in the foreground. 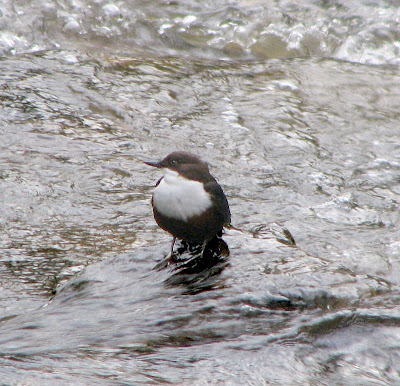 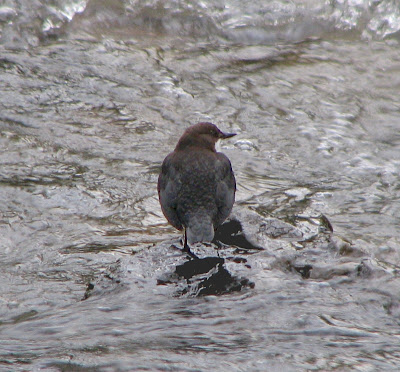 Front and back shots, and why not? I love Dippers!

Nice one, Karen.
I only wish i had something to keep me ticking over. Maybe this forecasted cold snap will bring me an early xmas present.