Botanising in Scotland June 2017 Part 1: The Agony and the Ecstasy!

At the very beginning of June we were in Scotland for the Chequered Skipper at Glasdrum Wood but also on our agenda was to search for Diapensia lapponica a rare plant which only grows on the top of one mountain near Glenfinnan. It flowers from the middle of May to early June and so we were hopefully going to catch it in time. I had in my possession a description of three different route options to the summit of Fraoch Bheinn and I’d decided on the shortest. Unfortunately it was also the steepest, following a ridge all the way to the summit. It is classed on hillwalking websites as a moderate climb but I reckon it was the hardest walk I’ve ever done! It was horrible! It started with a really steep climb through waist high midge infested bracken, I got eaten alive! Then it got steeper still and very craggy. When there were slight downhill sections they led into pathless impassable bogs. I fell into one of these, twice! We were also treated to several false summits and a torrential shower or two! Andy was often a fair way ahead of me and would shout encouragement to me every now and then. When we were very near the top he vanished over the shoulder of the summit and I could hear him shouting to me but this time it wasn't the by now familiar "keep coming, Karen!" I just knew it was because he’d seen the plant! In my excitement I momentarily had a new lease of life and made my way over to him as quickly as I could. There it was! Just a single large cushion with four white flowers. I’m not ashamed to say that I actually cried, with relief as much as anything, it was a joy to behold! 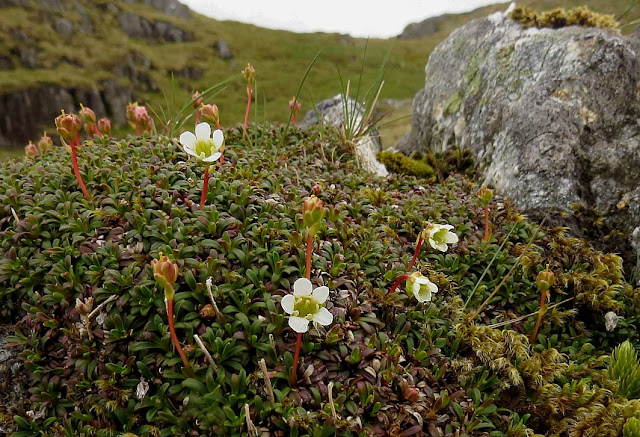 I wiped away the tears and took this photo of my first Diapensia flowers.
We weren’t yet at the summit. You can see the way up to it in background of this photo. 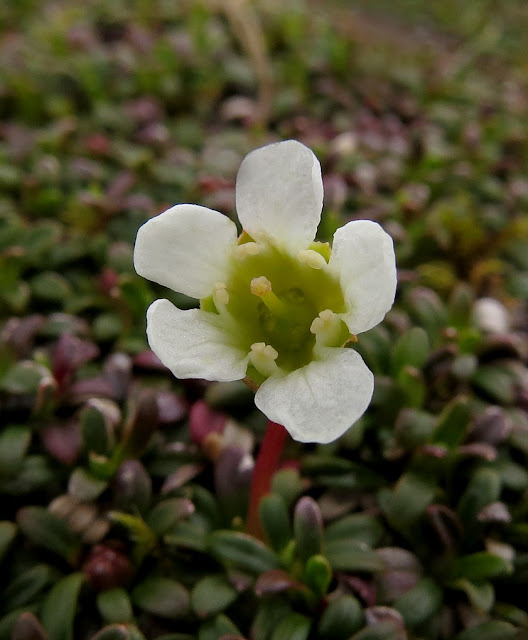 
We also saw some nice plants of Trailing Azalea in this area. It has leaves which are almost identical to those of Diapensia and the two would be difficult to tell apart if not in flower. Both have small tough leathery leaves densely packed to prevent dessication and create local warmth I should imagine. 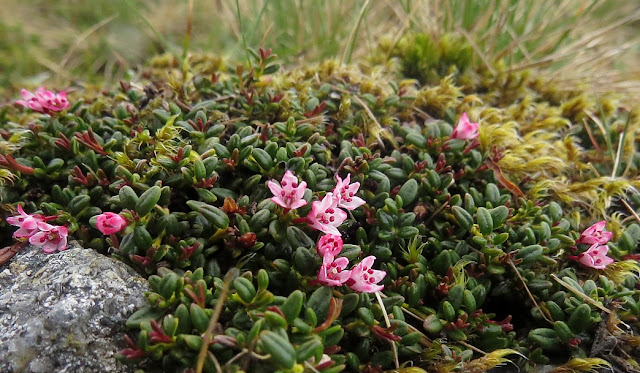 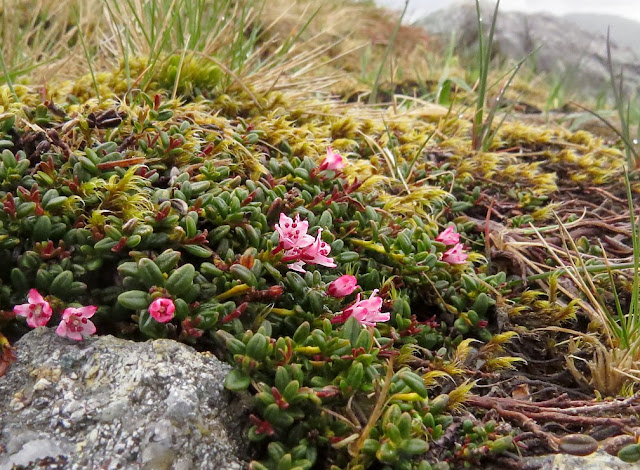 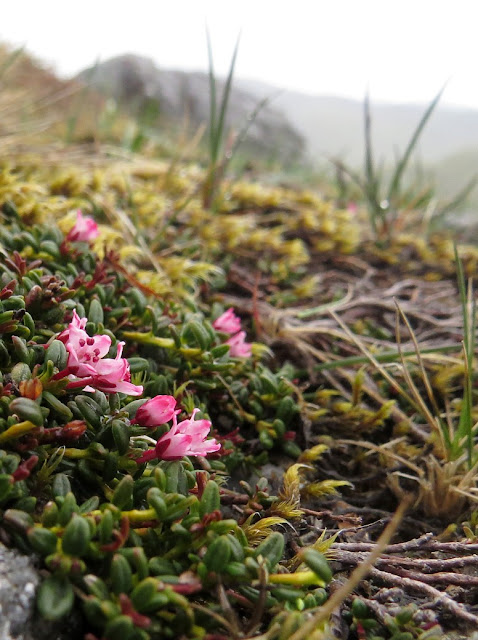 
When we reached the summit there were cushions of Diapensia everywhere, hundreds of them. Most of the flowers had already finished but there were still a good few blooms and best of all the sun came out for a bit and made for some excellent photo opportunities. The scenery was breathtaking too. 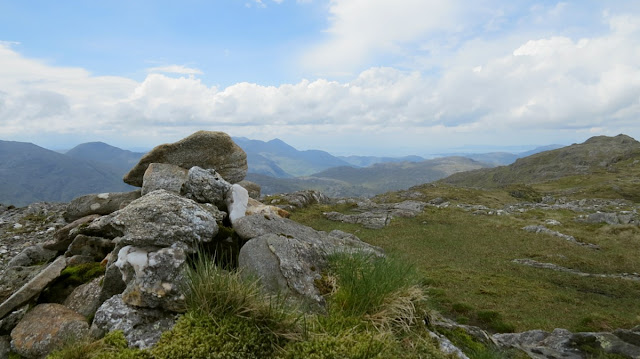 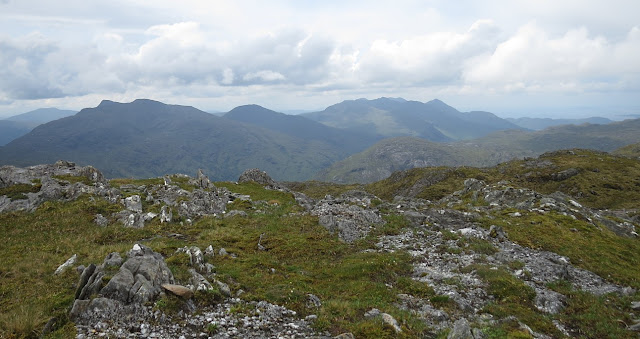 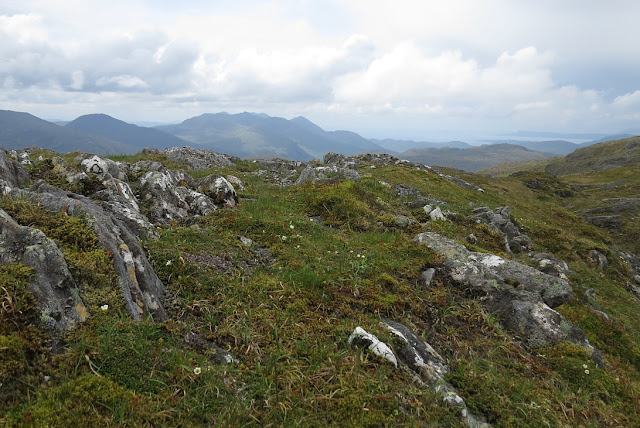 Diapensia lapponica on the summit of Fraoch Bheinn 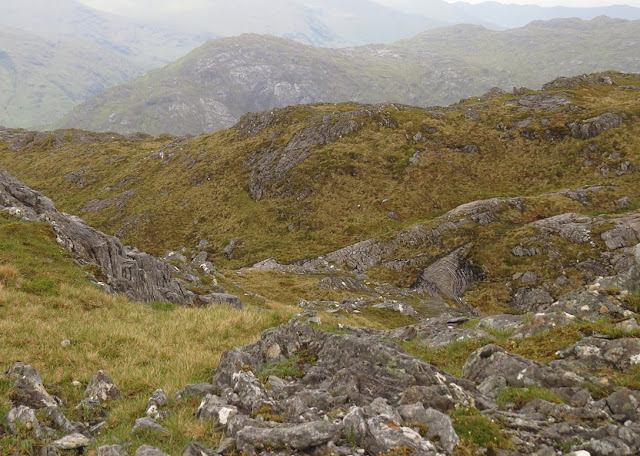 The rocky terrain of the summit plateau.
A small cushion of Diapensia visible in right foreground. 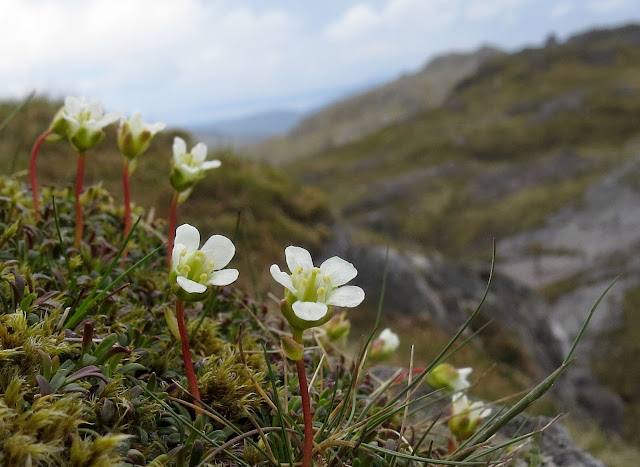 A photogenic group of flowers with the summit of neighbouring mountain Sgurr na Utha in the background. 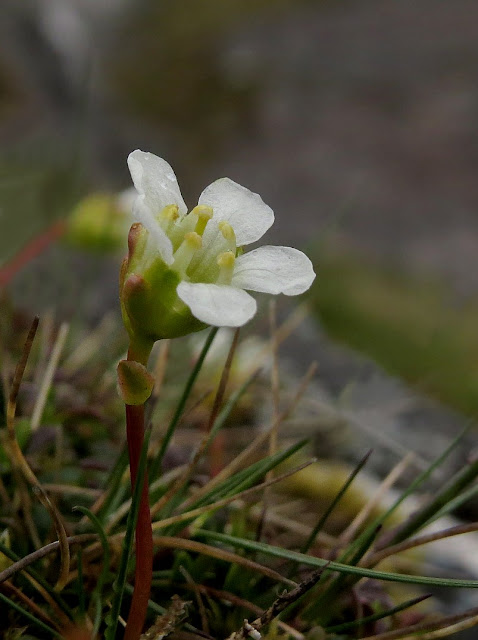 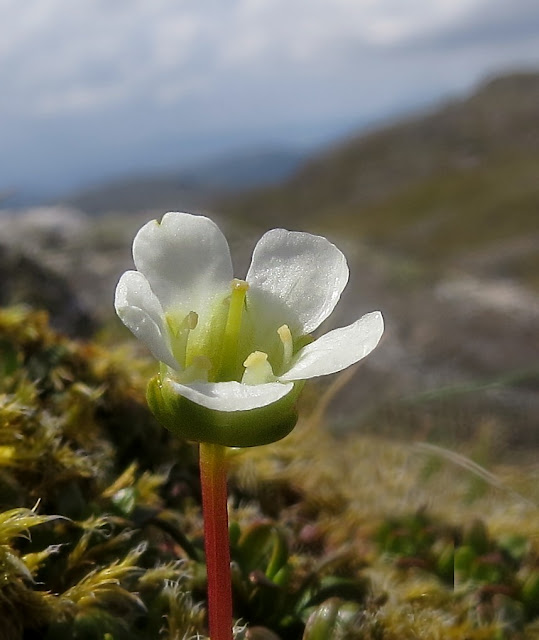 And in the sunshine simply exquisite... 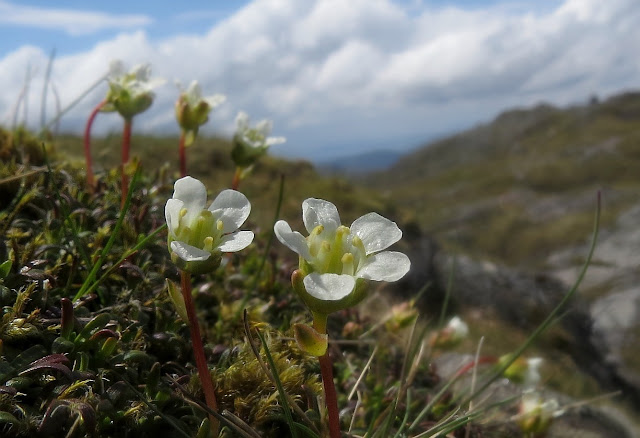 And worth every tortuous step! 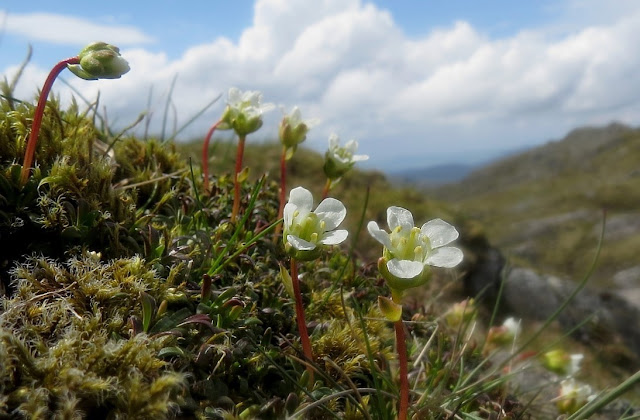 All too soon we had to think about getting back as looking to the west the sky was worryingly black. A storm was approaching. A mountain top known to have magnetic rocks didn’t seem a good place to be in a thunderstorm! I felt rather reluctant to leave as I knew chances were extremely remote that I would ever see this beautiful mountain flower again. Although downhill obviously, the journey back was still pretty arduous going and when the threatening storm did indeed hit and we were stuck in the midst of it with no shelter. The bogs got boggier and the grass got slippery. Just before the rain got really heavy we stopped to take photos of the first Dwarf Cornel we’d seen in flower. 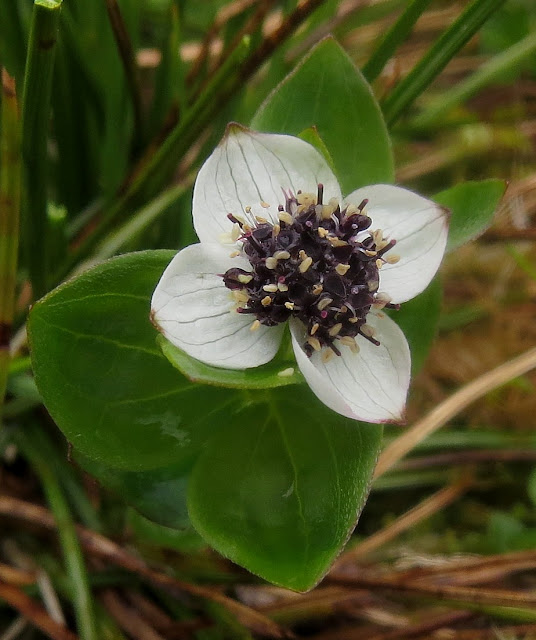 
As we reached the lower slopes the storm had passed, the sun came out again and we saw a lone female Chequered Skipper which was a lovely distraction for a short while. When we eventually reached the car at Glenfinnan station we both agreed that we wouldn’t go back up there even for £10,000! Seems a ridiculous thing to say now but at the time that’s how we felt. It was hell! But the flowers were heaven!

The following day it was off to Skye for yet more punishment. Well actually climbing up to the Trotternish Ridge was a doddle after the trials of Froach Bheinn. We were looking for another very rare mountain flower, this time Tufted Saxifrage, which had been discovered on the Trotternish Ridge just a few years ago in 2014. Most of the sites for this plant are extremely remote and difficult to get to so the chance of seeing it here was most welcome. I’d been given some excellent directions by the County Recorder but it was still very difficult to find!

The spectacular Trotternish Ridge and Sgurr a Mhadaidh Ruadh. 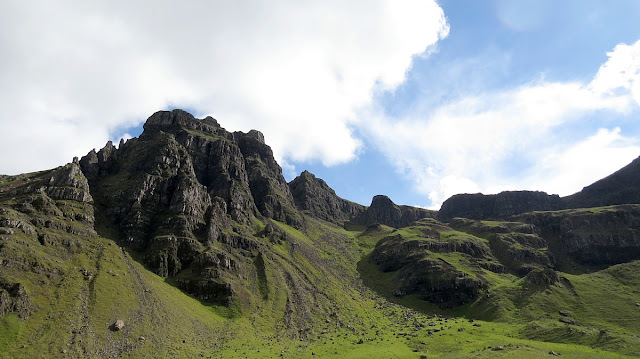 Tufted Saxifrage is up there somewhere.
At least the climb will be easy-peasy! 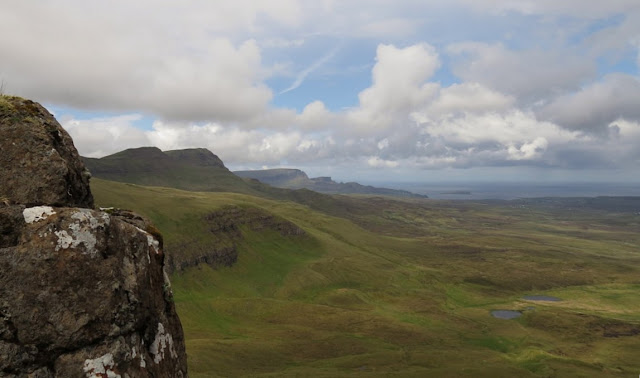 View from high on the ridge to the north.
We saw some nice mountain flowers on the way up to the Tufted Saxifrage site. 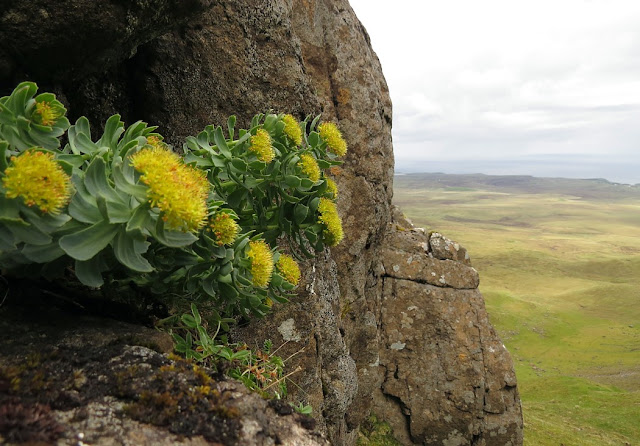 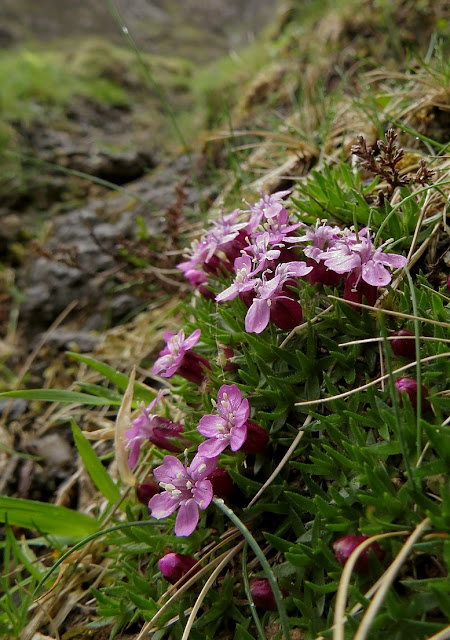 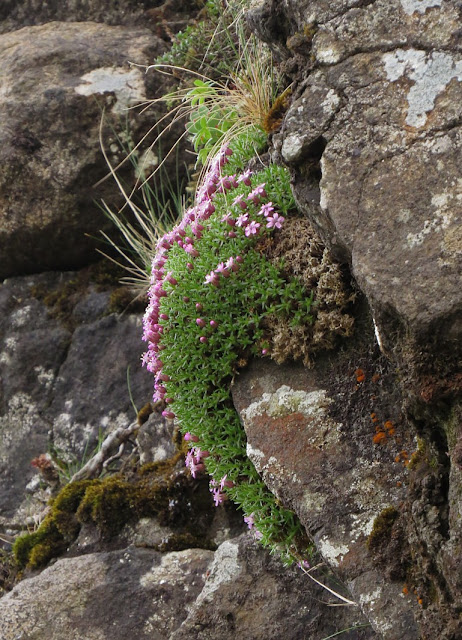 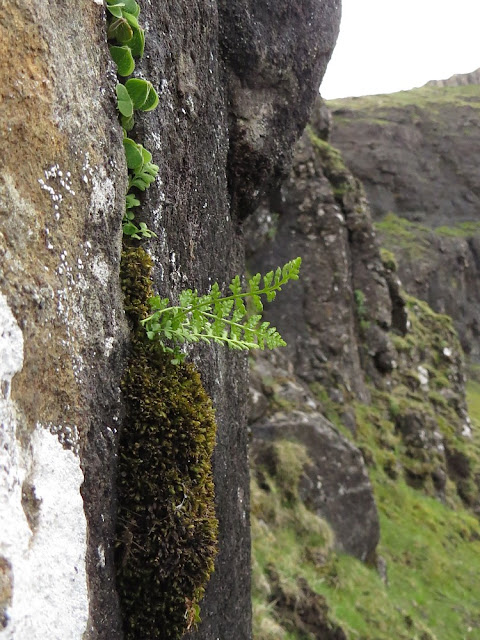 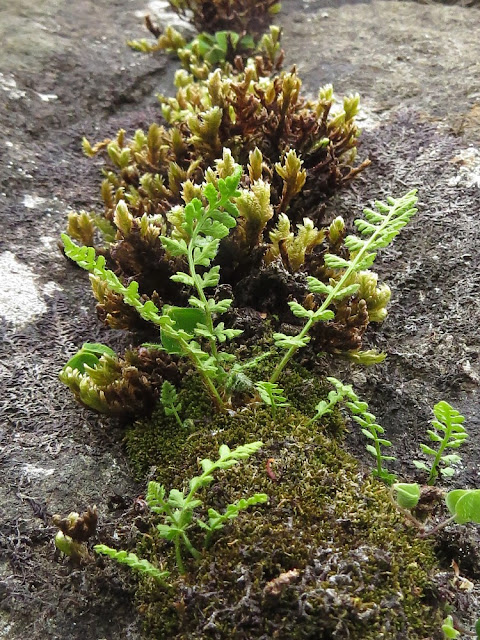 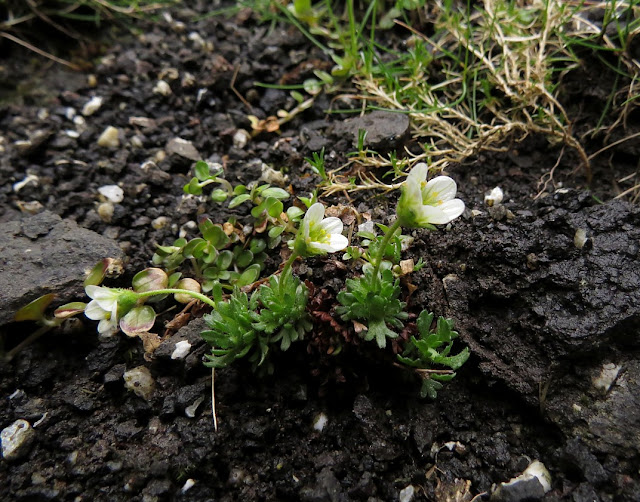 We found a few small plants in a steep gully. There may have been more in the vicinity but it was all rather treacherous and inaccessible. 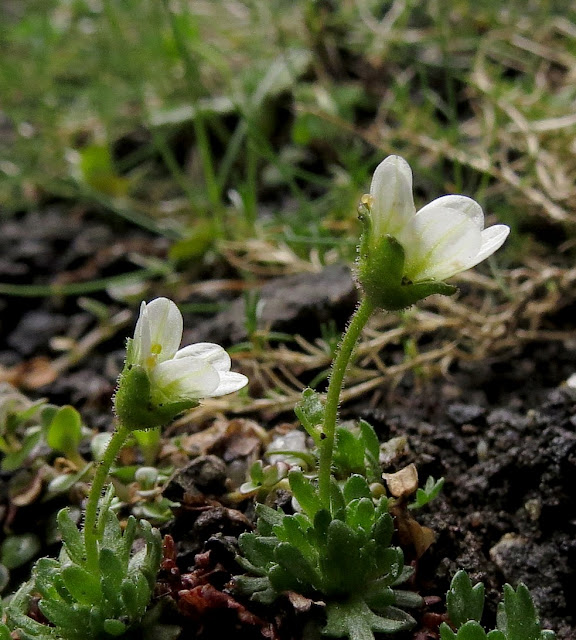 Throughly delightful little plants they are too! 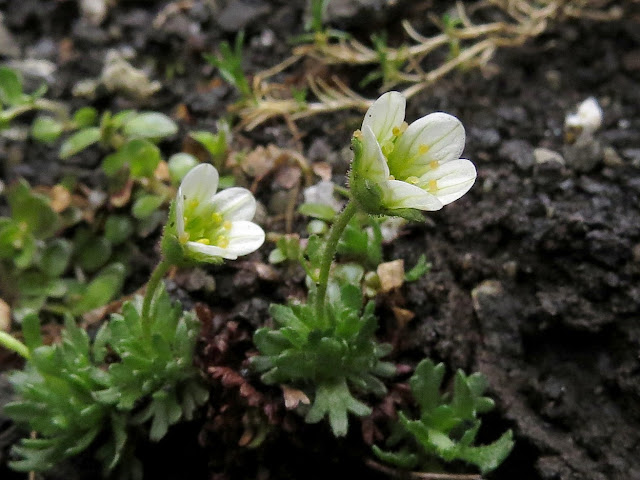 Posted by Karen Woolley at 9:57 pm

Just found your mountain on an OS map; ye gods you must be dedicated...or mad; I thought the walk up to get pics of a steam engine going over the nearby Glenfinnan viaduct was bad enough! Pics are again, incredible.

Karen, this brought back happy memories of my own visit to see Diapensia. The day we went (they were largely over) was hot and sunny. The descent was worse as we just plunged down blindly, ending up at ledges, bogs etc. Well worth it all though!

Steve, Happy memory for me now, because when I look at the result I kind of forget the painful part.