In Which I See Some Migrants.... Eventually.

I got up early this morning and didn't really know where to go. I tried Seaton Marshes and saw nothing. Then after hearing of the morning's fall of migrants at other sites along the south coast I opted for Beer Cemetery Fields...  again I saw nothing ... well a few Willow Warblers. While here I received a couple of texts from Steve who was 'falling over' migrants on Beer Head. So that was where I went next, Ian M arrived at about the same time and we had a stroll round for an hour or so. Fortunately, although the birds were moving through quickly there were still plenty to see, we didn't see any of the Wheatears, Whinchats and Yellow Wagtails that Steve had seen but we saw lots of Willow Warblers, several Redstarts two (or possibly three) females and a male. A Spotted Flycatcher, two Lesser Whitethroats, five Whitethroats and a Garden Warbler. I left after a text from Gav told of  Whinchats and Wheatears at Seaton Marshes. Where had they been when I was there earlier? I was hoping for a Whinchat on post photo opportunity but they were distant shimmering blobs in the heat haze....yes, heat haze! We haven't had any of that here for a while. While at the marshes I heard that Steve was now at the Cemetery Fields and was seeing migrants galore! So a morning of impeccable timing from me then! Still, shouldn't complain as I did see some nice birds in the end and got lots of  much needed exercise!

Only one bird was obliging enough to stay still long enough for a photo, this female Redstart on Beer Head. 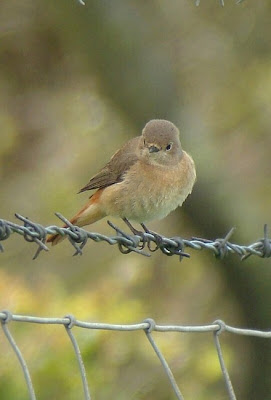 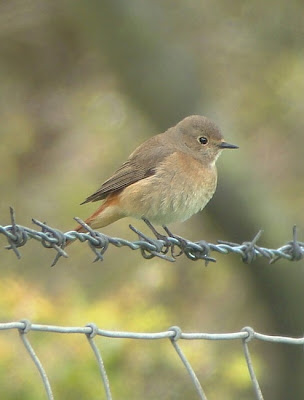 When I entered the hide at Seaton Marshes this morning I was greeted by this: 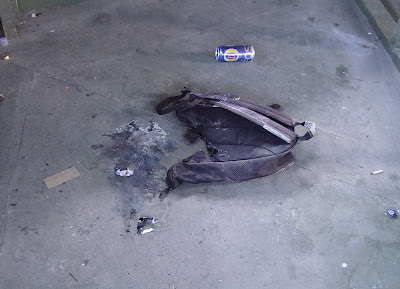 The Seaton arsonist strikes again! Well tries to by setting fire to a rucksack.
I find it hard to believe in such a small town that the culprits can't be caught.
It's only a matter of time until they succeed otherwise :-(

I find that getting up early often has that disorienting effect, and the reason why I so rarely manage it. Nice redstart photo