The Only Thing Remotely Summery is The Plumage

I was out and about out on patch for about five hours this morning, trying and failing to find the Kentish Plover that was seen briefly yesterday. I arrived at Seaton beach at about ten past six and Phil was already there, I could see him scoping something which turned out to be a couple of Sanderling ( a difficult bird on our patch) but I only saw them as they flew off with a flock of  Ringed Plover. There were also several Dunlin, Barwits and Whimbrel all of which flew off too. Impeccable timing from me again! Just one bird remained, but the best bird ( in the absence of the KP obviously!) a Grey Plover in almost full summer plumage. I've only ever seen summer plumaged birds from a distance and never got a decent photo opportunity with one. So now was my chance! One small problem presented itself though, it was only just light ( if you could even call it that) and although the bird looked great in the scope most of my photos were somewhat blurry. But... three or four actually turned out quite well, albeit a bit 'flat'. I don't know how, sheer luck I guess! 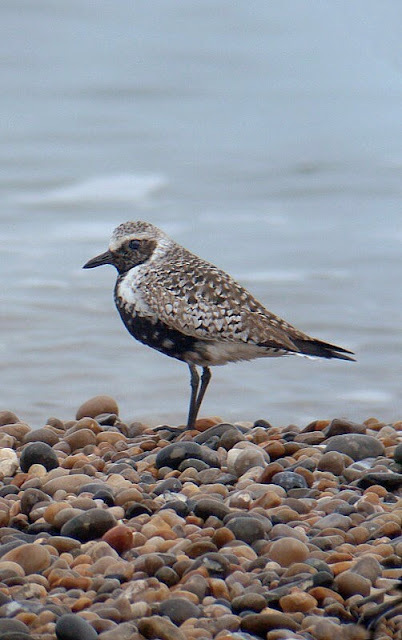 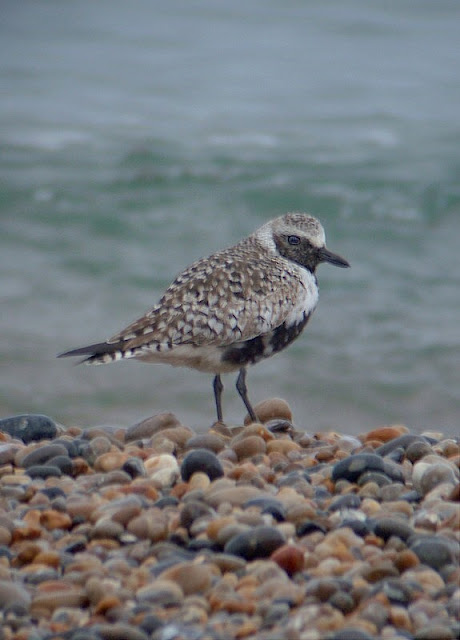 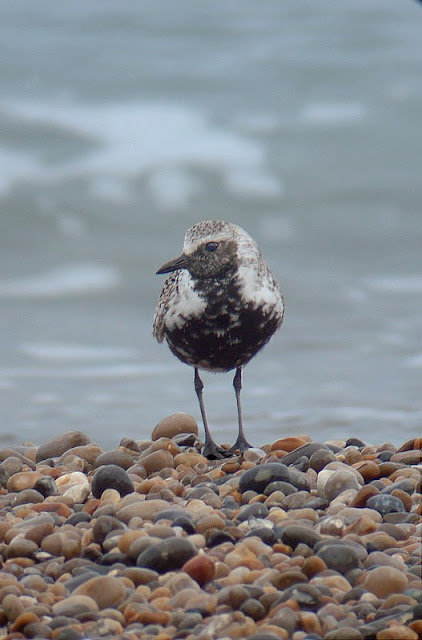 Not quite in full summer finery but close enough! ;-)


After the beach Phil, Bun and me went to Colyford Common and Black Hole Marsh. Where we saw quite a lot of Dunlin and hundreds of hirundines. Phil and Bun left to go to Egypt, yes Egypt, lucky for some! (erm.. I think) and I moved on to Seaton Marshes. After seeing very little there and popping home for a quick cuppa I returned to Black Hole Marsh to look at the river as the tide went out. I counted 73 Dunlin, 8 Ringed Plover, 4 Grey Plover a couple of Whimbrel one Black-tailed Godwit and 8 (a record number for me on patch) Bar-tailed Godwits.

It was nice to have the hide to myself ( a rare occurrence at Black Hole Marsh). Most of the waders stayed pretty distant, except the Godwits which ventured fairy close a few times. They were a lovely mix of full summer, transitional and full winter plumage. I always wonder why some birds retain their winter plumage for so long, although it certainly felt like winter standing in the Tower Hide with a north-easterly wind blowing in through the slots. I will be retaining my 'winter plumage' for the foreseeable future that's for sure. Possibly even until August! 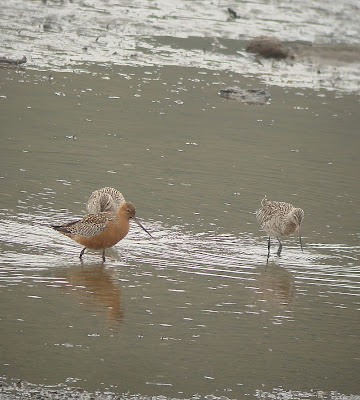 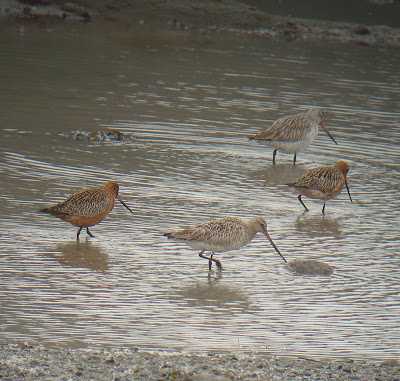 Assorted Barwits.
In the bottom photo you can clearly see how the female (centre) has a longer bill than the male 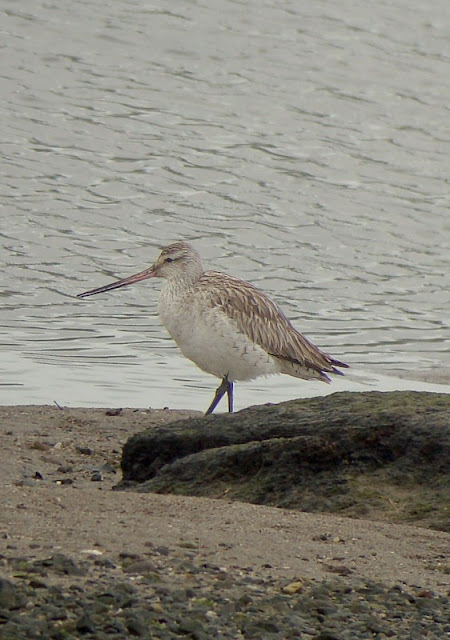 Still in full winter plumage... I know how she feels. 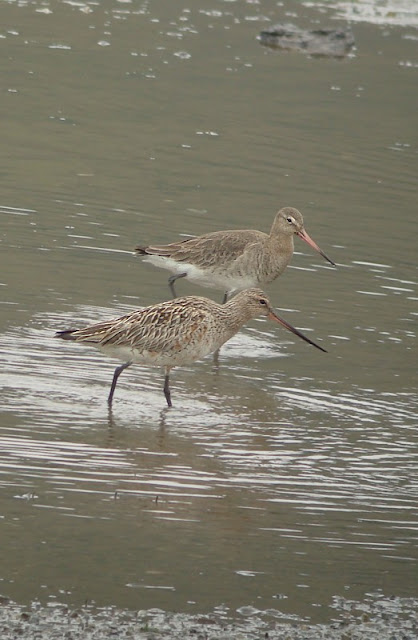 Spot The Difference.
Nice comparison shot of winter plumaged Blackwit and Barwit.
The Barwit is another female just beginning to acquire some peachy coloured feathers on her flanks and belly.


Steve joined me in the hide for a while but we soon made a hasty retreat when we looked out and saw this..... 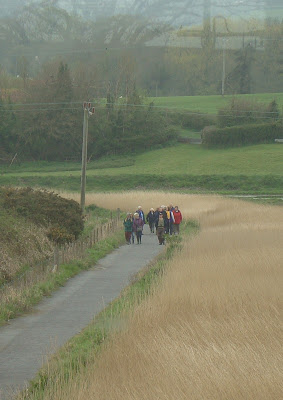 Time to leave... This was only half of them!

On Wednesday the sun shone briefly so I decided to go for a walk along the beach east of Axmouth Harbour to look for butterflies again. I foolishly assumed that with the wind coming from the north the beach would be warm and sheltered below the cliffs. Wrong! There was a sharp and rather cool westerly sea breeze.There had been a large landslip (probably not good news for the Small Blues) and the small Sallows that had been flowering and teeming with invertebrate life on my last visit were now black and withered, scorched by the salt-laden gale force south-easterly winds we had last week. I managed to spot a couple of butterflies somehow clinging onto life. Two of the same species I saw on my last visit here. 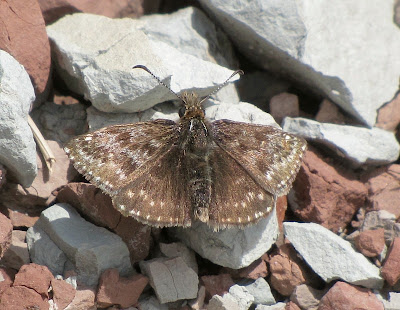 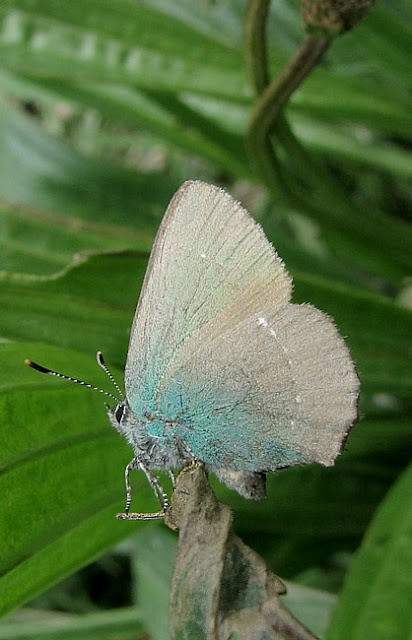 Green Hairstreak
I think from the abdomen shape that this is a female. I hope she managed to lay her eggs before the weather deteriorated again. 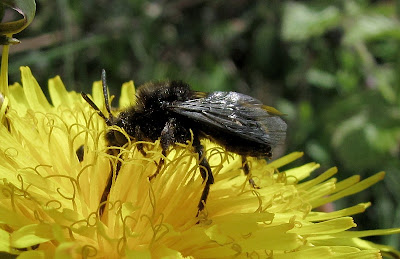 Another as yet unidentified 'all black' Bee.
Just look at the length of its tongue!

And finally a couple of photos from Wednesday morning on Seaton Marshes. 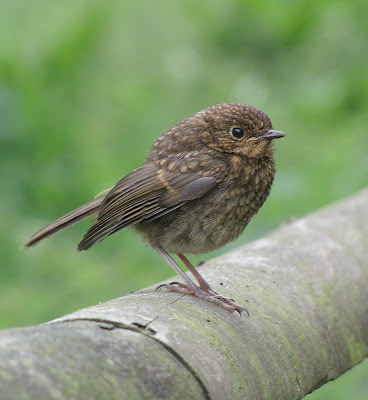 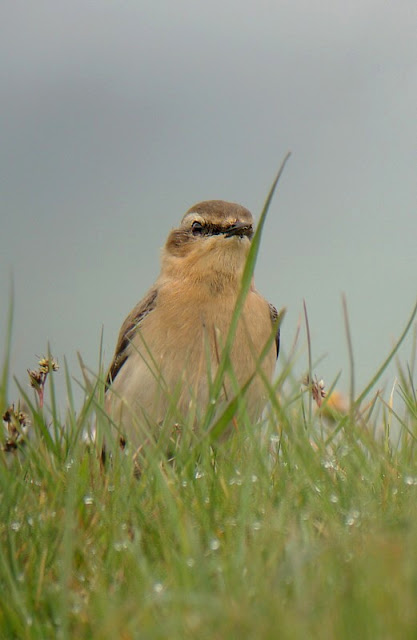