Firstly I'd like to belatedly wish all my readers, followers and groupies "A Very Happy New Year"  I just haven''t been able to find the time to blog lately. I was going to put on a long rambling review of the past year but I've sort of left it too long now really. Also to be honest I'd find it quite difficult to pick out the highlights because I had a fantastic year, seeing forty-three new bird species, four new butterflies and several new plants too. I thoroughly enjoyed every minute of it ( well, I suppose with the exception of the 'American Bittern Experience') If 2011 is even half as good I'll be happy, very happy! I can pick out one bird though as overall 'Bird of the Year' and it's not even one of the 'lifers' .... it is for the second year in a row!!..'The Whistler of the North' 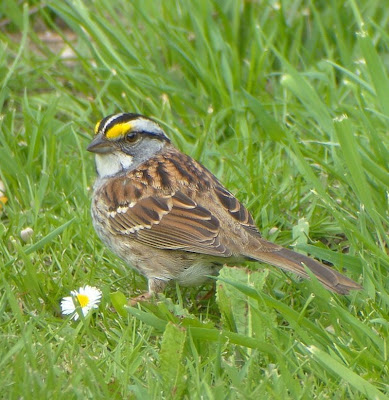 White-throated Sparrow...What a bird! What a song! What a winner!

Martha had asked me to pick her up from college in Exeter today, which was good because it gave me the perfect excuse to pop over to the Marsh Barton Trading Estate and see the flock of 29 Waxwings which are feeding on some ornamental rowan trees outside a couple of massive car dealerships. A horrible place brightened up beautifully by these gorgeous chunks of loveliness. I watched them for 85 minutes before leaving to pick up Martha, during this time they flew to the berry trees  just seven times (so once every 12 minutes) and were only feeding for a maximum of fifteen seconds each time before returning to a small ash tree in the adjacent road. So in almost an hour and a half they were only actually feeding for less than two minutes! Whilst sitting in the ash tree waiting for an opportunity for their next 'sortie' they gave superb views and their constant trilling was just delightful. It's very easy to see how they got their scientific name Bombycilla garralus (Chattering Silktail) It was raining all the time I was there and the skies were leaden but it didn't dampen my spirits and I had a stab at digiscoping them all the same. It would have been rude not to! It's always worth a try - never say die. Turned out quite well in the end. I'm back at Marsh Barton tomorrow getting the car serviced so I might see some more. 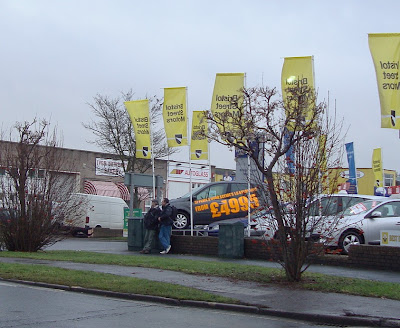 The tree in the foreground is the rowan that the birds were feeding in.
Notice how the ornamental white rowan was obviously grafted onto a wild rowan rootstock which is growing in the natural state with red berries from ground level. The Waxwings prefer the little white berries though. Some of the birds are visible in the ash tree behind the leftmost yellow flaag.
Soggy Waxwings
Actually they are exceptionally water repellent you can see the tiny water droplets on them in these photos if you look closely) 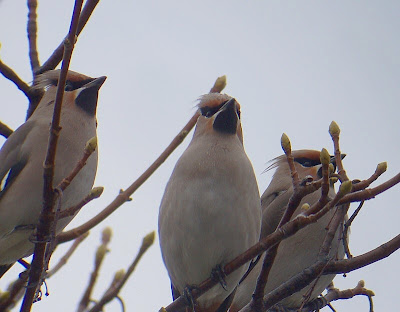 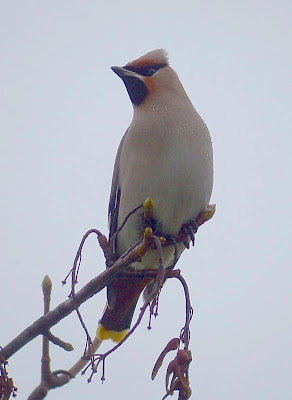 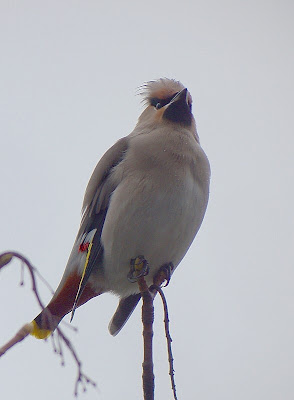 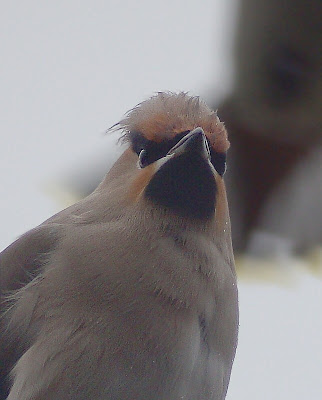 Posted by Karen Woolley at 9:47 pm