Americans in Cornwall and The Earth's Shadow

Yesterday, after having taken note of the favourable weather forecast we ( Bun and me) had planned to go down to Cornwall to see a few nice birds from 'across the pond'. Good cloud cover and little to no wind were going to be ideal conditions to see the Pacific Diver out in Mount's Bay off Marazion. However, on venturing forth at first light I was a bit disappointed to see a cloudless sky. "Never mind though" thought I, "It may well be cloudier in Cornwall".  (A tip for the government: Don't bother selling/leasing all  of our state owned forests and woodland just get rid of the Met Office, it would save a fortune and we could just rely on our own 'best guess'. Or as Bun suggests, just pay an old bloke with a piece of seaweed to do it!) First stop was on Bodmin Moor to look for the drake Lesser Scaup on Dozmary Pool. We'd both seen this duck last year but it was very distant on Colliford Lake so we were hoping to get better views this time because Dozmary pool is relatively small and easy to view. When we arrived it was absolutely freezing ( yes, no sign of the forecast cloud cover here either) and we were greeted by this.. 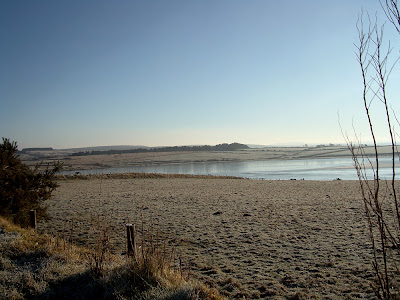 Bird-less and frozen solid!
Better chance of seeing Torvill and Dean here than Lesser Scaup!
We had a quick look over the road at the distant Colliford Lake but this was almost entirely frozen too.  We decided  there was nothing to loose by having a look on the way home and so we returned at about 3pm to find the pool still solid, with nowt but a few gulls roosting on it. A quick look over the road revealed a small group of ducks, on a small patch of unfrozen water, on the Loveney nature reserve area of Colliford Lake. One of these was the Lesser Scaup and so we enjoyed views every bit as crippling as last years! 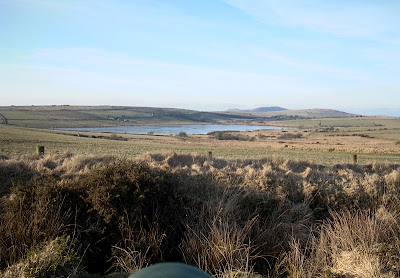 There's Colliford Lake about a kilometre away!! 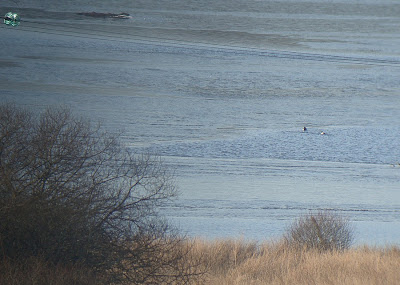 ... and there's a Lesser Scaup! Don't just take my word for it though, it's clearly visible following  along behind the equally clearly visible Tufted Duck....Okay, take my word for it then!!
At Marazion conditions were NOT the flat calm sea and cloud I'd been hoping for but glaring winter sun and a very cold stiff northerly breeze making the sea pretty choppy as well as hard on the eyes. Bun spotted the Pacfic Diver though when it gave it's location away by having a bit of a flap about, and then stayed in view for a good ten minutes or so preening as it slowly drifted into the shimmering glare to be lost forever! (Well it's not there today apparently (Update: Oh yes it is!!!)). Not the most exciting lifer I've seen. There wasn't much else in the bay, except for a nice Long-tailed Duck which I saw briefly before that disappeared forever too. It would have been rude to have visited Marazion and not at the very least have cast one's bins over the marsh. So with this in mind we crossed the road and had a quick look over the reedbeds. We had timed this to perfection and were just in time to see a Bittern walk out of one reedbed saunter casually across a cut ride, pose for a few seconds( not long enough for me to get my camera though) before disappearing into the reeds on the other side. Brilliant! Only my second ever views of Bittern on the ground that!
Next port of call was St.Gothian Sands NR near Gwithian to look for the third American visitor, a Ring-necked Duck, a smart drake too. We were very impressed with this reserve where there were lots of ducks on a nice small easily viewable pool, nine species in total. The Ring-necked Duck was showing really well and it wasn't asleep! It was continually diving making getting a photo via digiscoping a bit of a challenge. I managed it though. 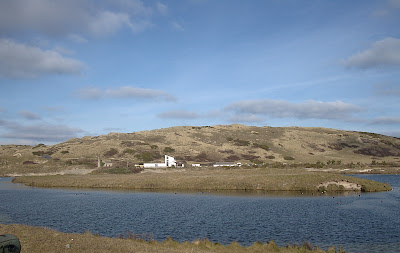 The main pool, St Gothian Sands NR.
It would be nice to have some good diving duck habitat like this on patch, then I wouldn't get so excited about seeing the likes of these.... 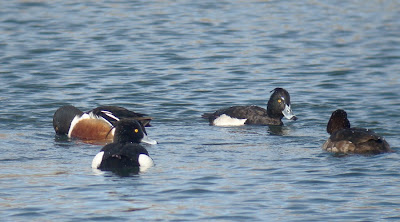 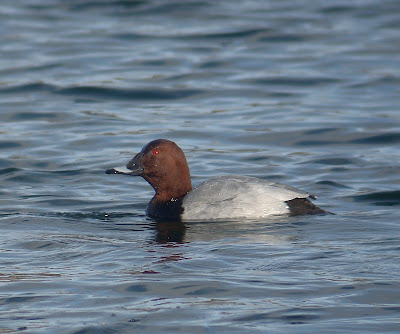 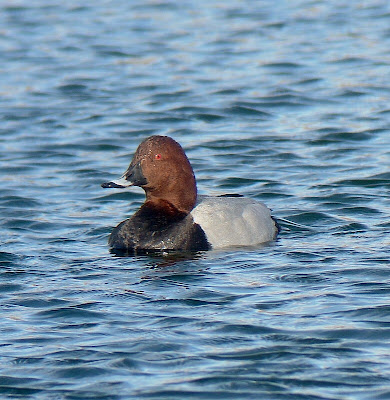 ... these.
I really like a nice drake Pochard even though they're common 'dross'. 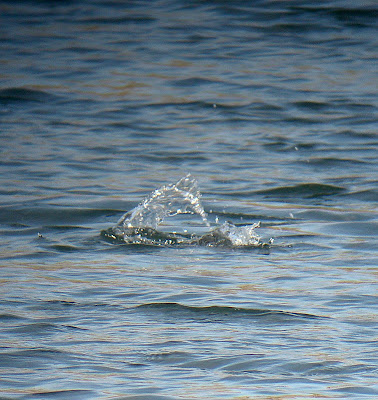 Most of my photos of the Ring-necked Duck looked like this.
I managed to get him a few times though. 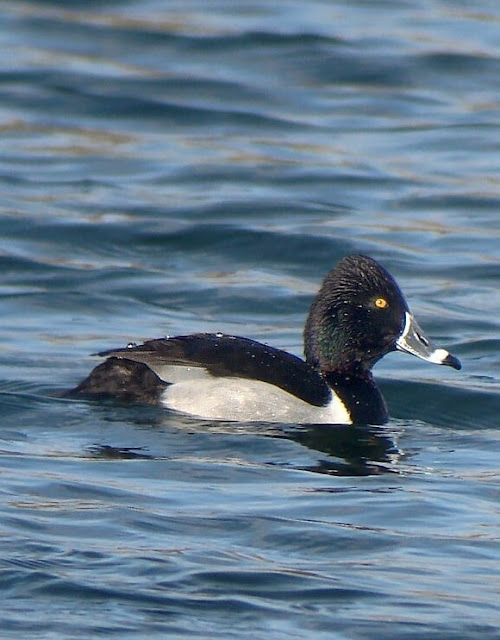 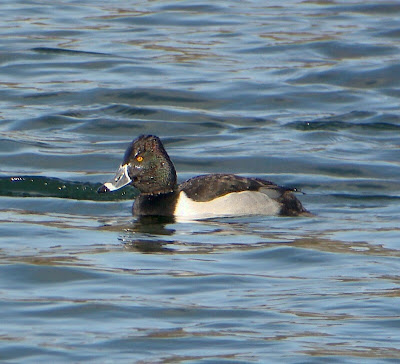 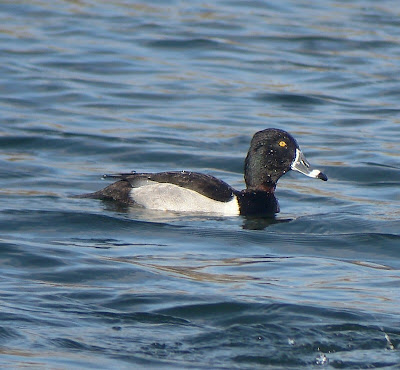 On the last two shots you can see why it's called a Ring-necked Duck.
This purple ring isn't always easy to see. 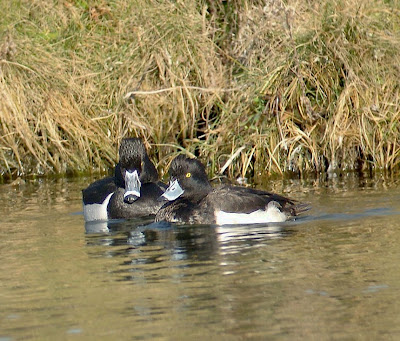 With a Tuftie drake for comparison.
So, all in all a good day's birding. It's not often you get to see three American birds in a day (unless you live in America obviously) Just a shame views of two of them were poor. Hopefully there's still plenty of time to give them another go if the mood so takes me.
On arriving back in Seaton I noticed that there was a beautiful sunset over Beer Head and stopped the car to take a photo thus.. 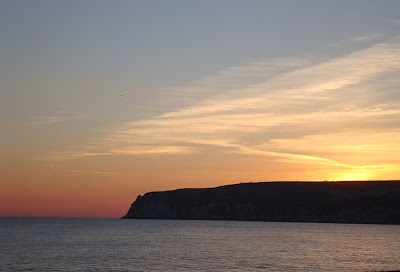 Beautiful and attention grabbing...but have you ever looked at the opposing horizon during a glorious sunset? If you have you'd have seen this... 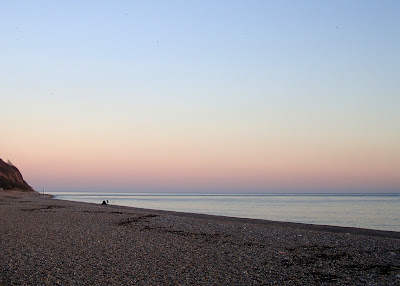 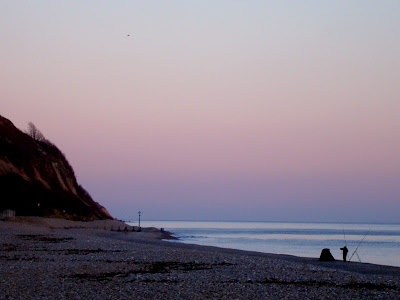 The dark band gradually rises from the horizon as twilight deepens.
It is the Earth's shadow cast upon the atmosphere.
Finally. This morning there was another hard frost and Martha called me from the kitchen, where she could see lots of House Sparrows on next doors' garage roof. "What are they doing?" she asked. I didn't know until I watched them for a moment, there were about twenty of them all lined up along the plastic fascia. They were scraping the frost off the plastic with the sides of their bills and eating it. I've seen birds eating snow before but not scraping a surface like this. It's little wonder they're really thirsty the amount of seed they're getting through!! 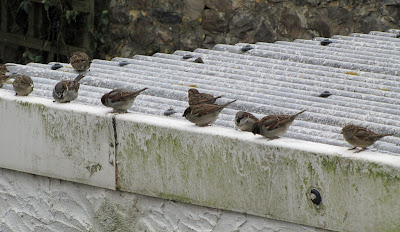 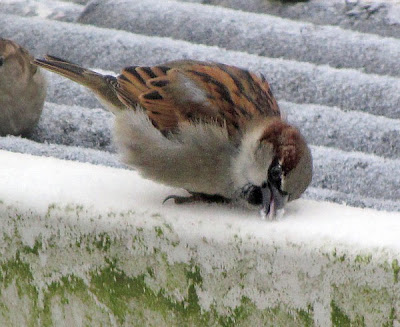 Scraping technique in action!
Shame the photos are a bit naff ( super-zoom through window... yes, a dirty one too I'm afraid) 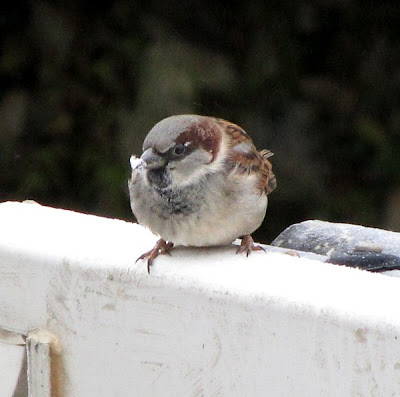 Some great shots. I like the new header picture too!

More of the same please!

Thanks Angie, I'll have to go back and take another photo for my spring header.

Thanks for the encouragement Dave! :-) Though not all my days out are so interesting!! ;-)