I have stacks of Fungi photos, including some from last year. Here's a selection of Earthstars and a Stiltball. Before last September I hadn't seen any earthstars although I'd always hoped to. I've now seen five different species, some common (though not that common or I'd have seen them before ) and some rare. 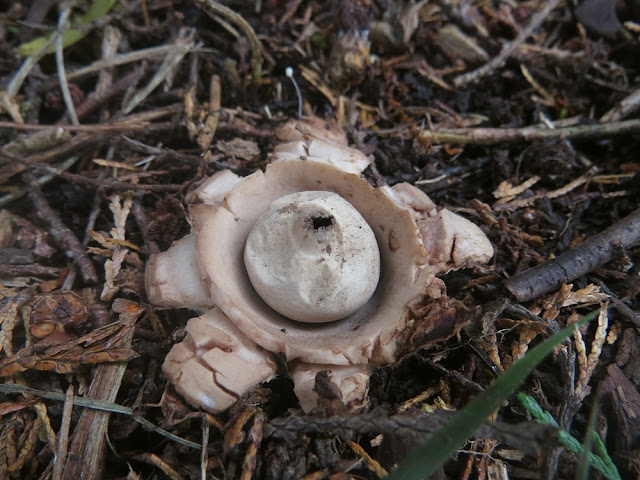 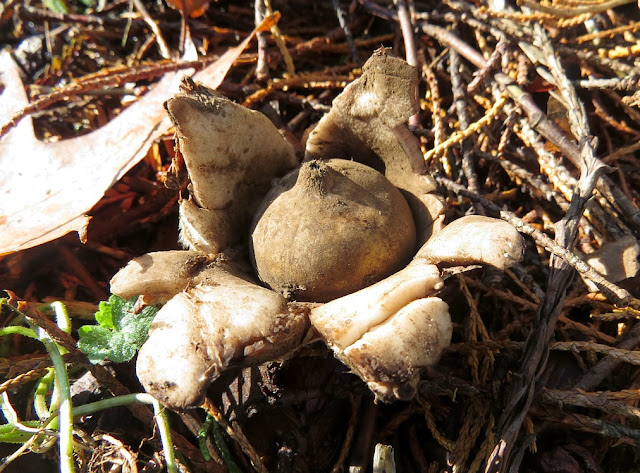 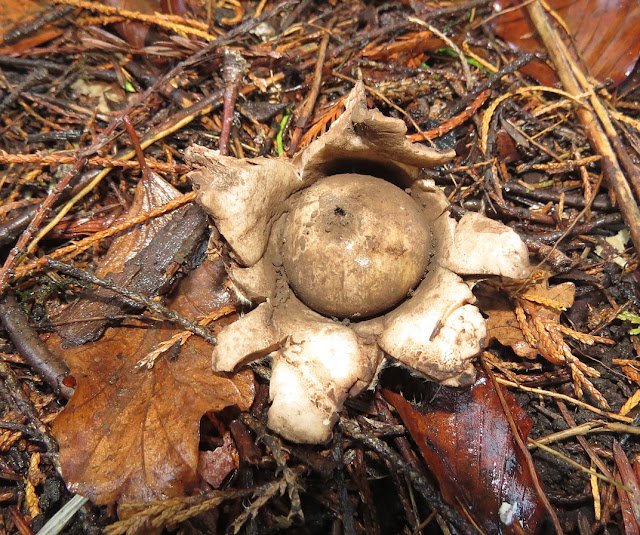 One of the largest and most common Earthstars named for the fleshy collar that forms between the  rays and the spore sac, although sometimes this isn't present as in the last two photos here.
These two specimens were both found under conifers at Stourhead in Wiltshire. 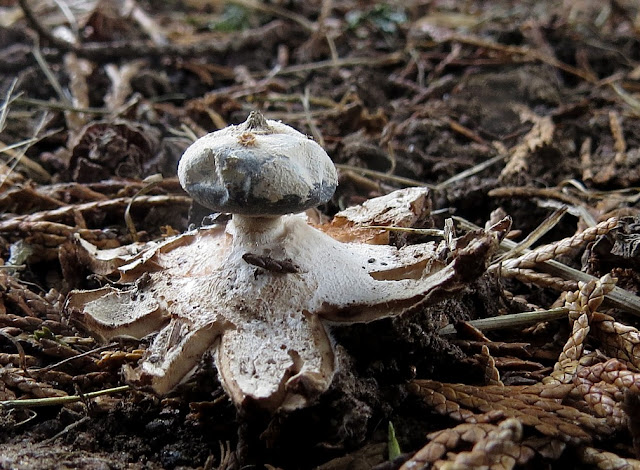 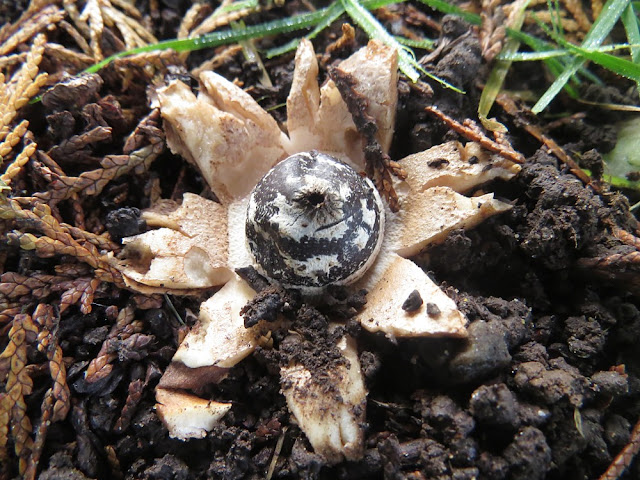 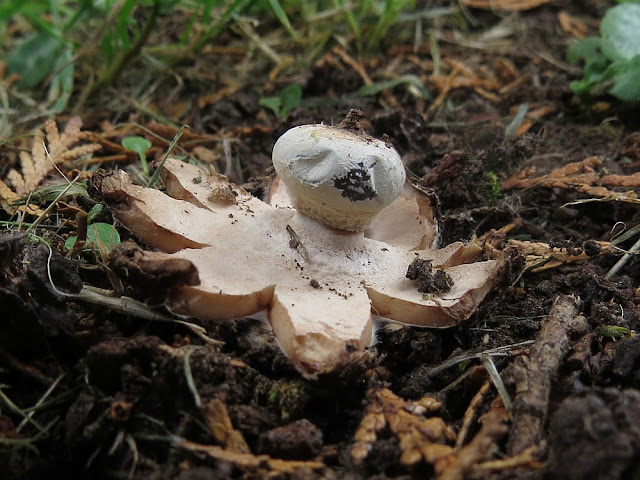 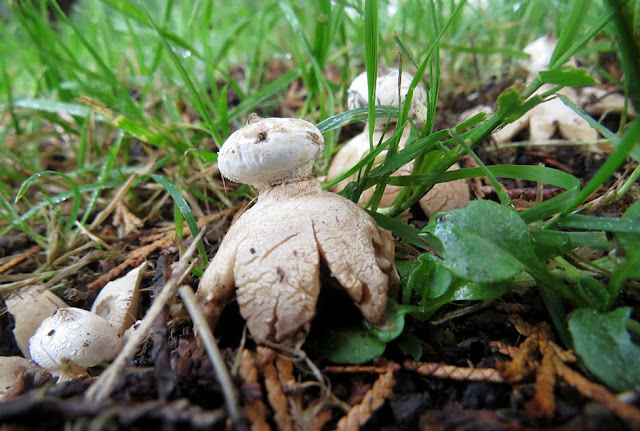 These have a pleated 'beak' and a distinctive collar around the base of the pore sac.
These specimens were all seen under conifers in a Hampshire Cemetery 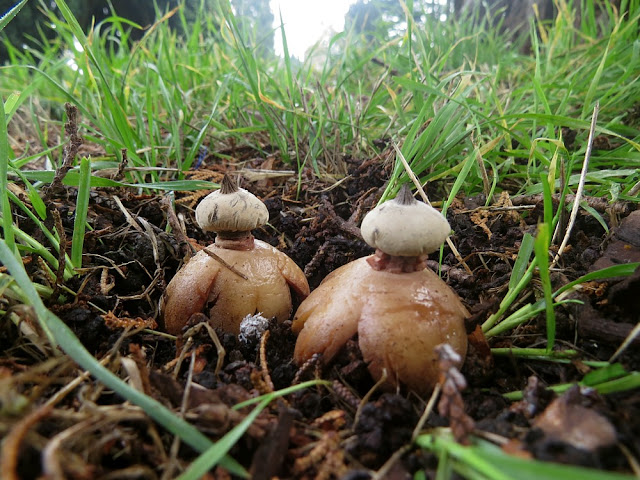 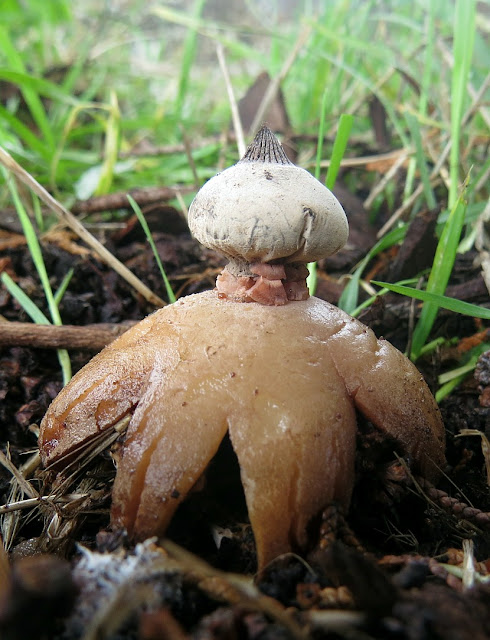 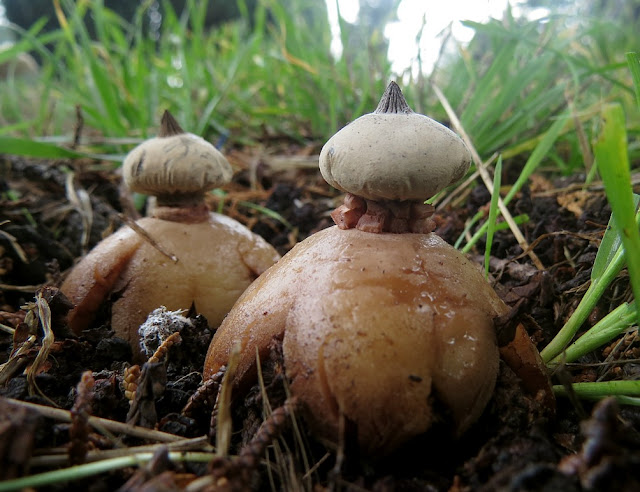 Although these look noticeably different to the previous Earthstars in colouration I think they are also Striated Earthstars. They are very fresh but appear to have the correct collar and beak.
If anyone knows or suspects they are something else please feel free to correct me.
These were again under conifers in a Hampshire Cemetery albeit a different one. 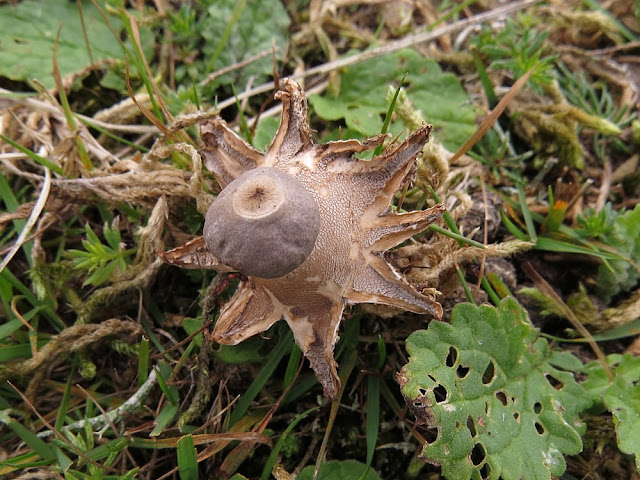 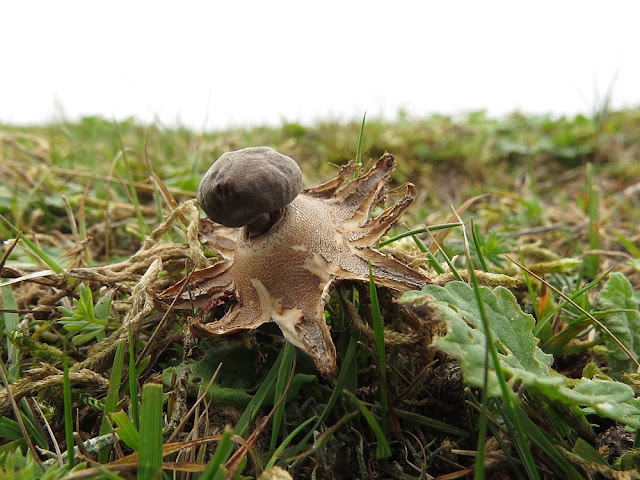 We found these on Burnham Overy Dunes in Norfolk last September whilst searching for Jersey Cudweed. A rare and as its name suggests, tiny earthstar. The one in the photo was only about 2cm across. My first ever earthstar sighting and what a good one! 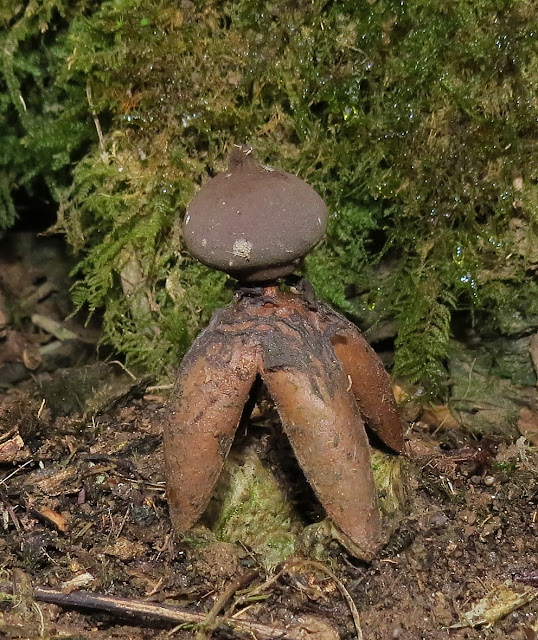 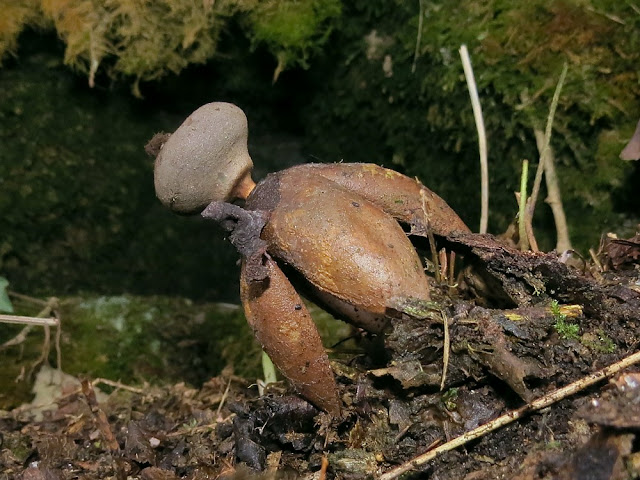 Another quite large earthstar which is pretty spectacular as it raises itself up on legs joined to the points of a cup beneath. It can be quite long lasting and these particular specimens had been around for several weeks before I photographed them. You can tell that they are old as there is algae growing on the inside of the cup in the first photo. They were underneath beech and sycamore at the base of a roadside bank near Buckfastleigh, Devon. 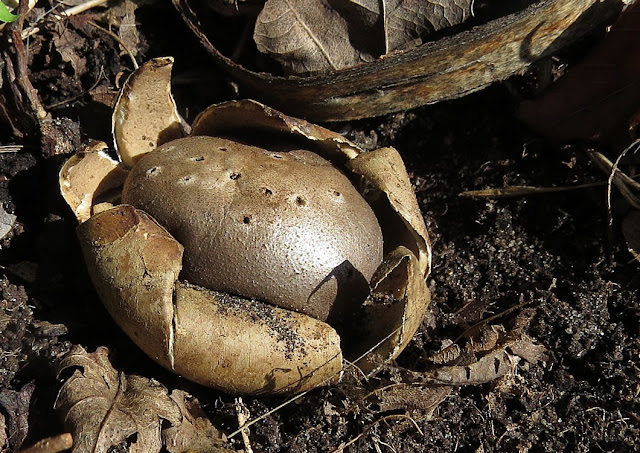 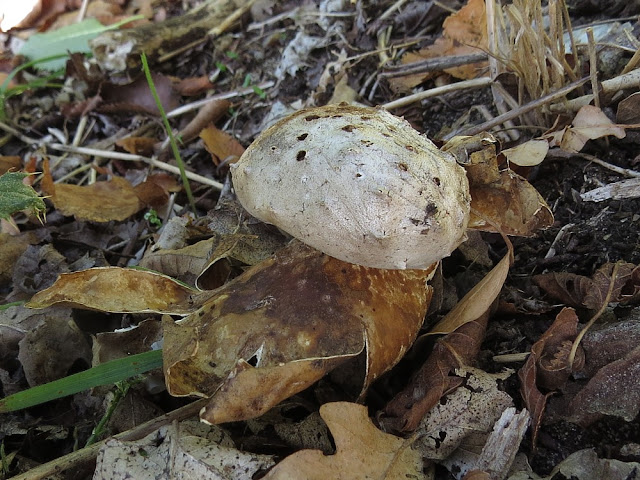 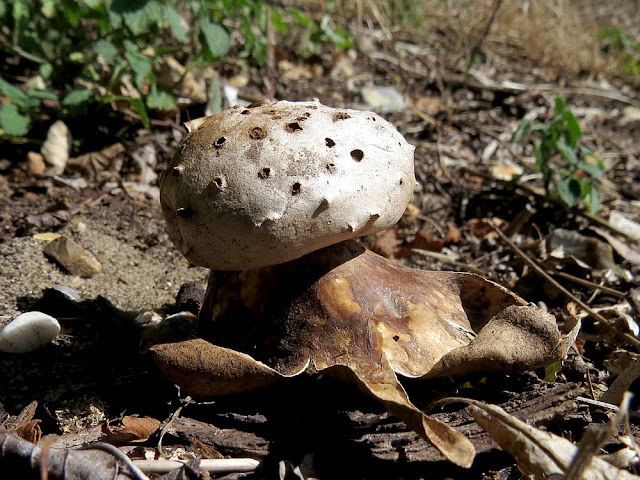 This rare and unusual earthstar is only found in the Channel Islands and at two sites in Suffolk. We were lucky enough to find it in Suffolk whilst looking for the rare and even more unusual Sandy Stiltball fungus. The Pepperpot is quite a large Earthstar with a very distinctive multi-pored spore sac, which looks a bit like, yes, you've guessed it. A Pepperpot. 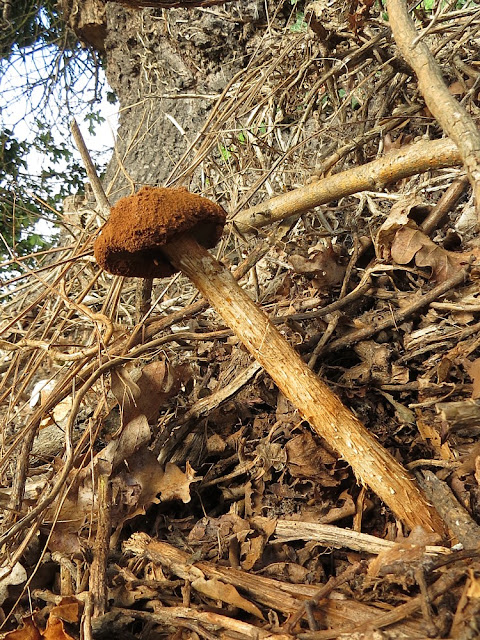 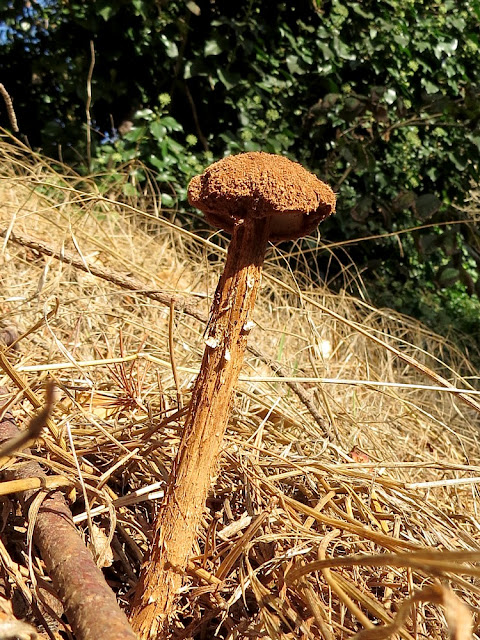 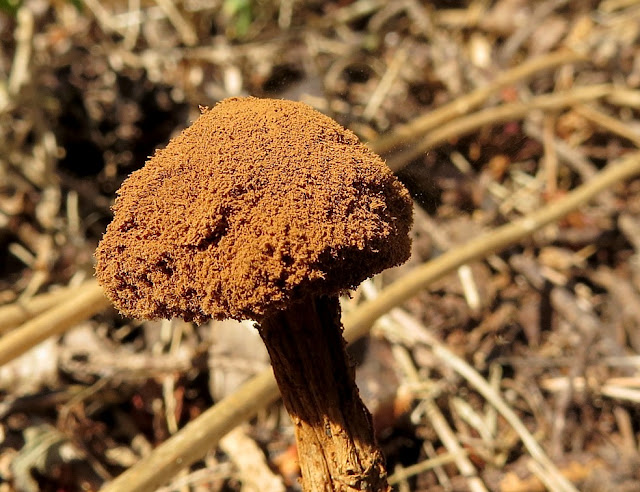 A very striking species which can grow up to a foot high. It has its spore mass on the outside of a cap like structure at the top of a long scaly stalk, all of which grows from an underground 'egg'. It grows on dry sandy banks especially in Norfolk and Suffolk but is always rare. These were on a protected road verge in Norwich.

Posted by Karen Woolley at 9:07 pm