When news came through of a White-throated Sparrow at Boscastle in Cornwall, Bun and I 'pencilled it in' for tomorrow, after all we'd seen the one in Hampshire last April so there wasn't any immediate rush. By 1.30 we were on our way there!! Well, the Hamshire White-throated Sparrow was our 'bird of the year' last year so it would have been a bit daft to have risked not seeing this one and hopefully getting some better photos. It showed briefly almost as soon as we got there but I wasn't able to get any shots, fortunately we only had to wait a further forty or so minutes before it reappeared though. It just 'materialized' in a small bush close by and started singing before flying down to the lawn to feed. I managed to get a couple of good photos and a decent video clip too. What a little gem! What a great song! Bird of the year again this year? Probably....very probably :-) 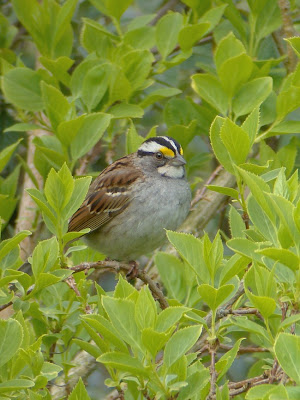 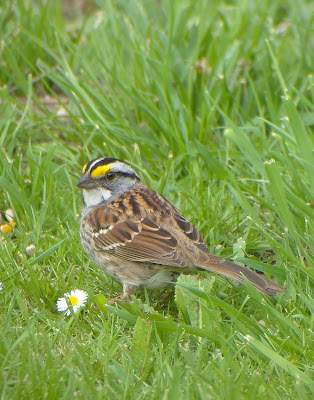 Here's the video. The bird only sings once at the very beginning. It appears that before it can sing a second time it gets distracted somewhat  by a bee. I've called it 'White-throated Sparrow II - Return of the Whistler of the North' It's much better than last years effort (here). Who said sequels are always worse than the original? ;-)

What a great little bird, and you managed to get a great pic too, nice job. Linda

Thanks Linda, I was really lucky ;-)