A few more places we visited in July most notably one of the Northern Corries of Cairngorm but I'll leave the best 'til last.

If you have read my blog post entitled Clearwings, you may recall that we had a puncture and consequently saw a Welsh Clearwing whilst driving along the shore of Loch Rannoch after a visit to Rannoch Moor. Well we were at Rannoch Moor to see the Rannoch Rush (which isn't a rush) growing at one of its only locations in the UK all of which are on Rannoch Moor. It's a vast area but the plants we were looking for were situated not that far from the road at Rannoch Station. We found good numbers but unfortunately they had just about finished flowering. Having said that I don't think they would look a lot better in flower than in fruit. We were hoping to find Small Cranberry hereabouts too but had no luck. 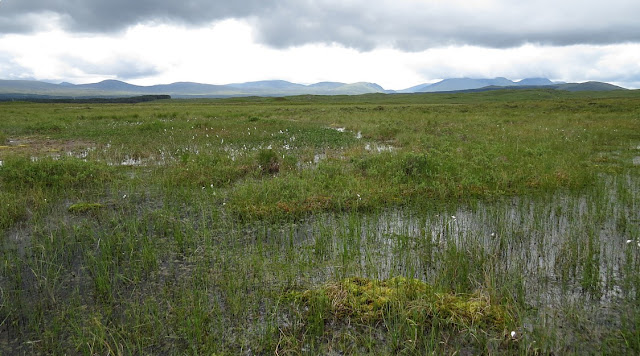 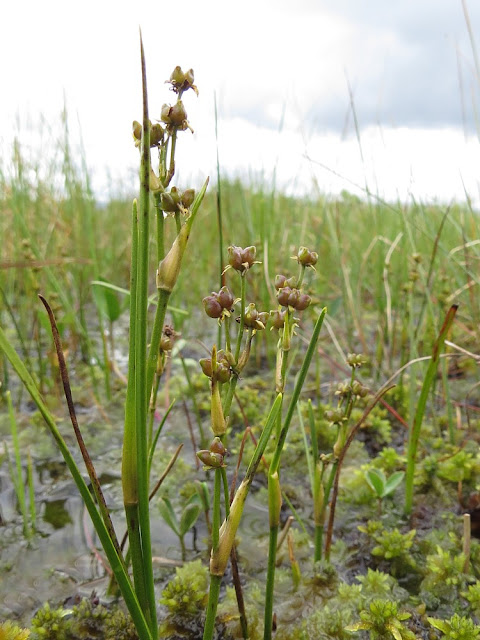 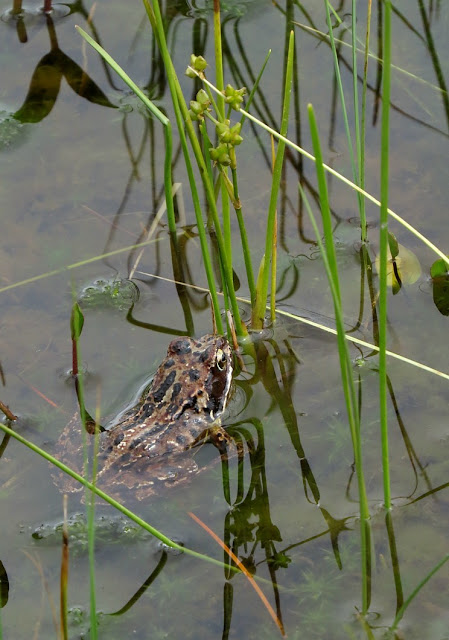 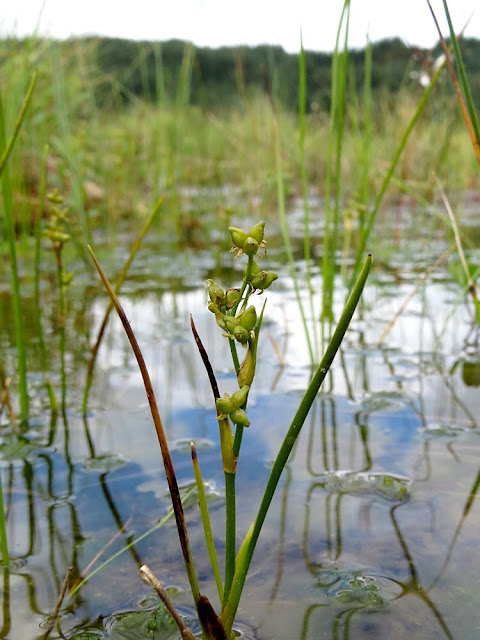 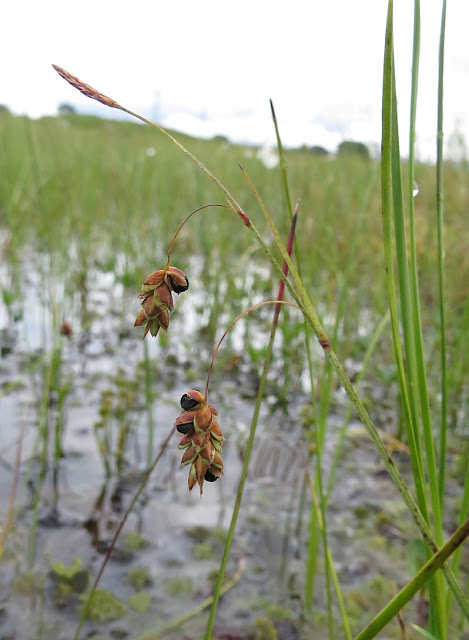 We spent hours walking around in this area without too much to show for it. My wellies sprung a leak halfway across a river which was kind of an omen for the rest of the day really. We were looking on river gravels for Arctic Sandwort. It sometimes occurs in this habitat as its seed gets washed down from the hills in floods. We had no joy on the River Loanan and so instead followed the beautiful limestone valley of the Allt nan Uamh to the Bone Caves and beyond. We searched in vain in this area too. Arctic Sandwort is a small inconspicuous plant and would be extremely difficult to spot if not in flower. So it can't have been in flower obviously! That's my excuse. It wasn't a totally wasted day as we did see the 'stunning' Whortle-leaved Willow. 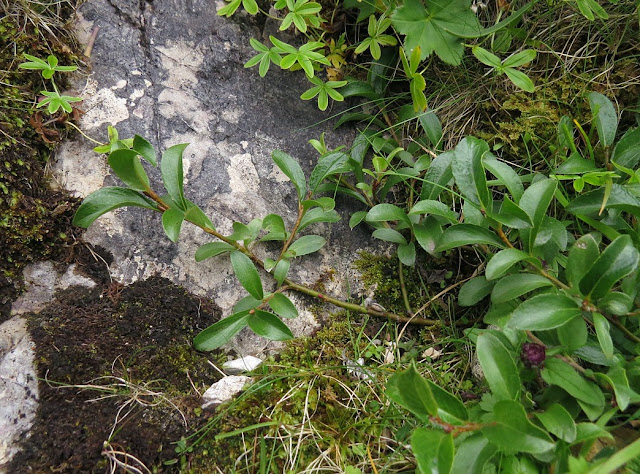 The scenery in the area is absolutely spectacular and the geology fascinating. 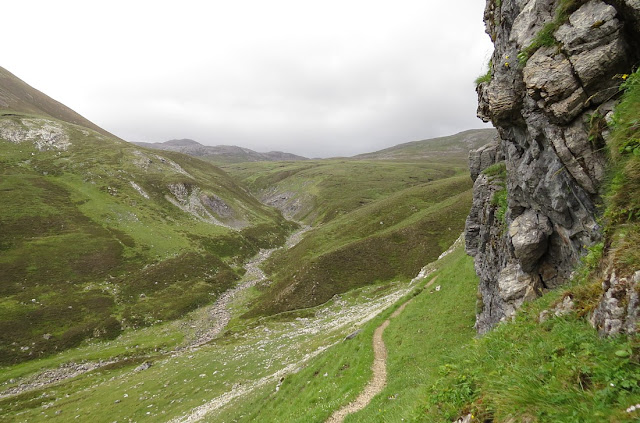 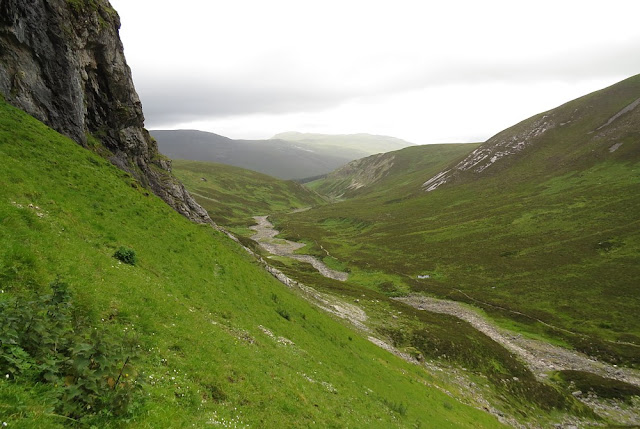 Dry river bed of the Allt nan Uamh.
Looking from the Bone Caves 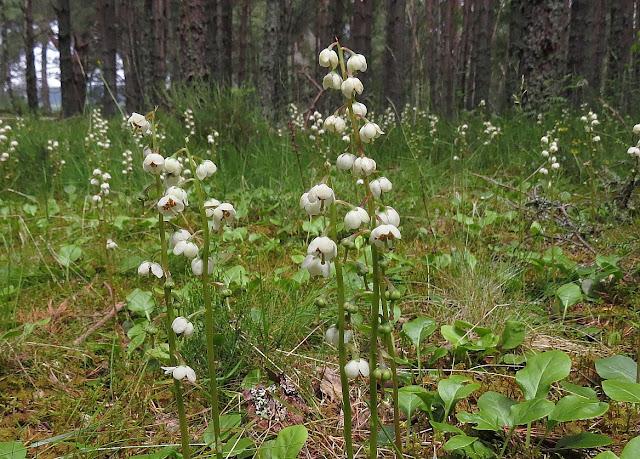 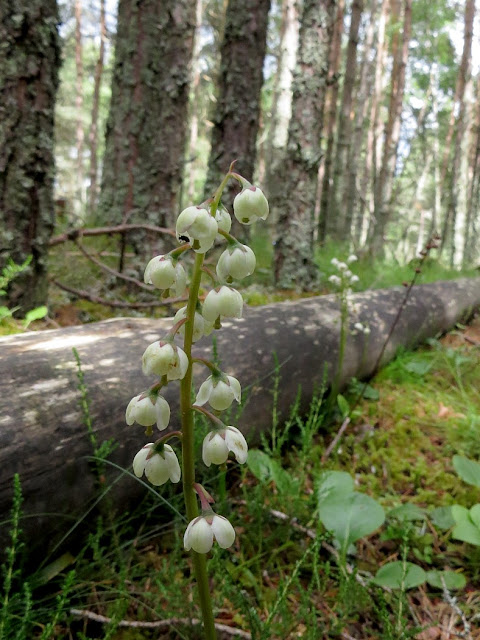 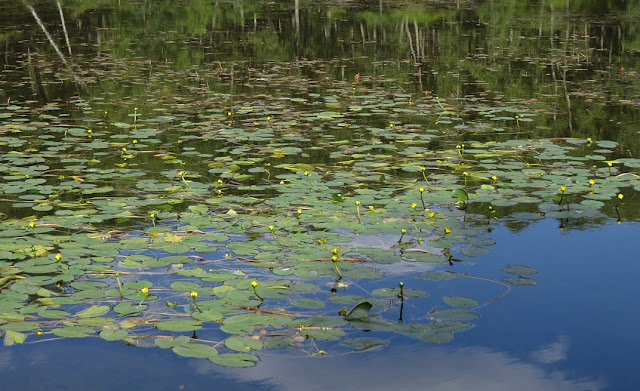 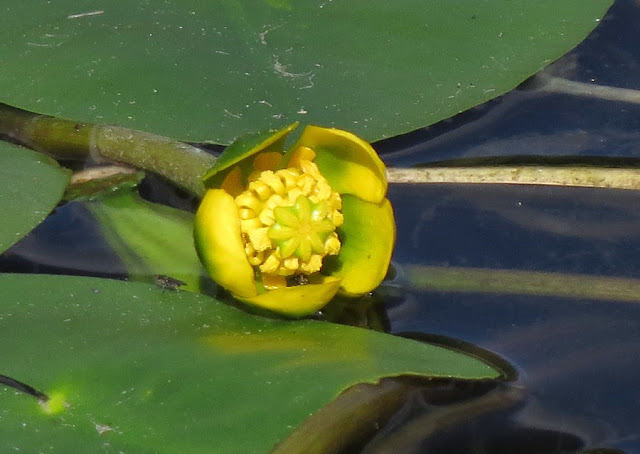 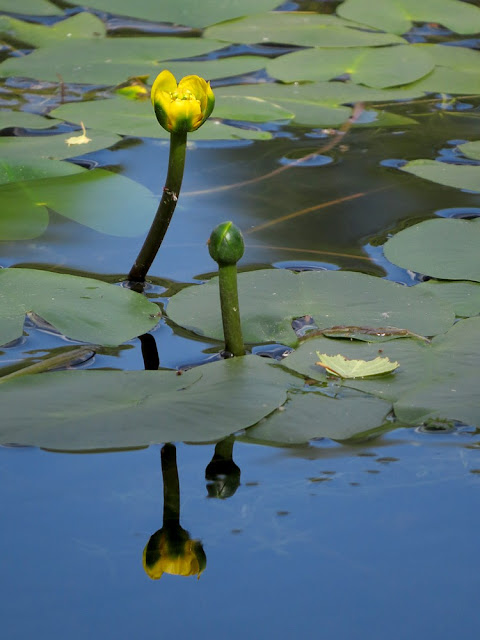 Both of the Northern Corries, Coire an Sneachda and Coire an Lochan are superb sites for mountain flowers but we only had time to visit one. It was a difficult choice but in the end we decided on Coire an Sneachda as I had quite a few grid references for our target plants there. It is quite an easy walk from the Coire Cas car park compared to some others we had done, with no steep climbs until actually in the coire itself.  The weather was simply gorgeous, sunny and warm, with hardly a cloud in the sky. Not your typical Caingorm weather. 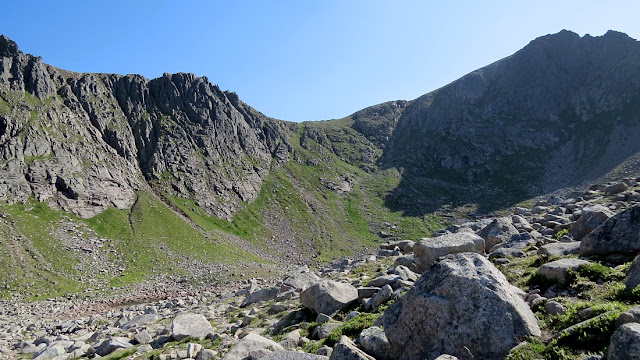 Coire an Sneachda.
If you look closely you might just make out the small path ascending below the crags and heading up towards the ridge. This is called the Goat Track and lots of fine mountain flowers can be seen by taking this route. 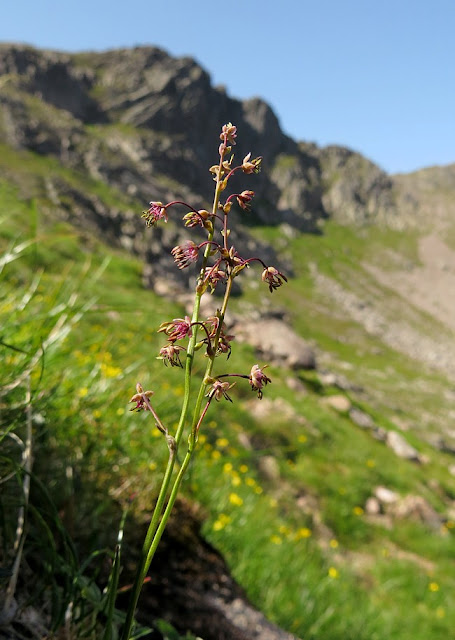 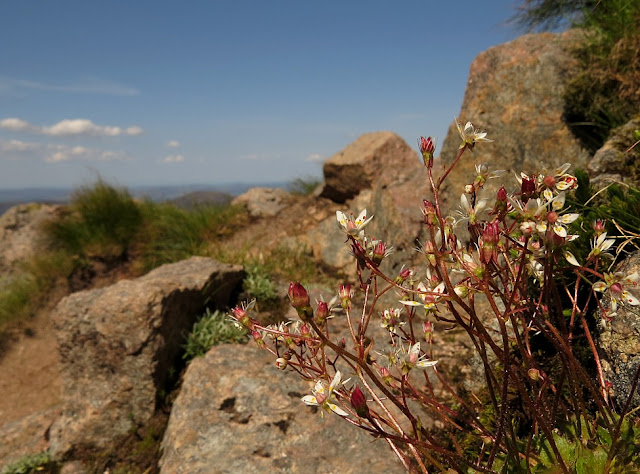 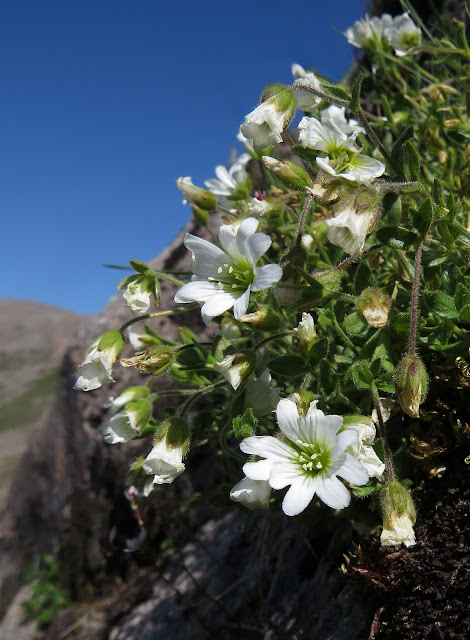 There were lots of clumps of this beautiful large flowered cerastium on the cliff faces, most too difficult to reach for a good photo. This one involved an arms length effort. 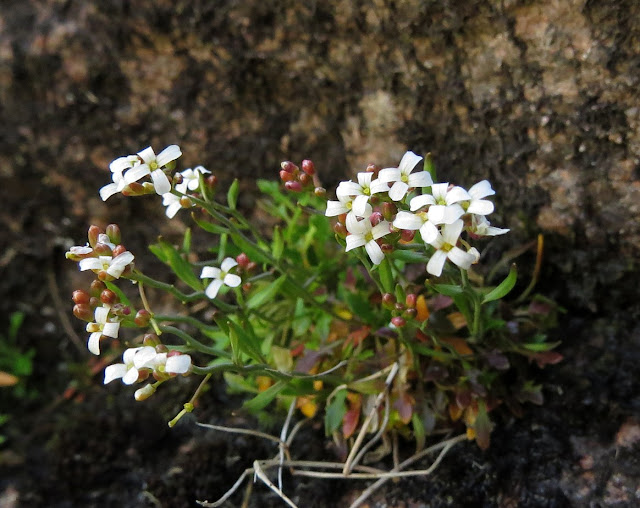 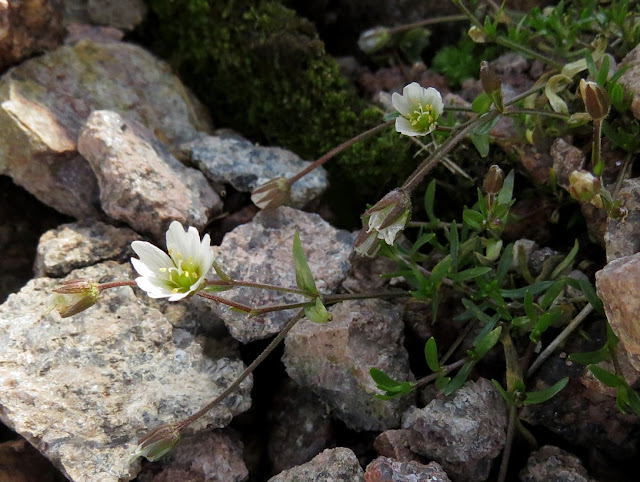 This is the rare Starwort Mouse-ear which grows high on mountains in areas of late snow lie which meant we were in the right area for one of our main target species which requires the same conditions but damper and shadier. 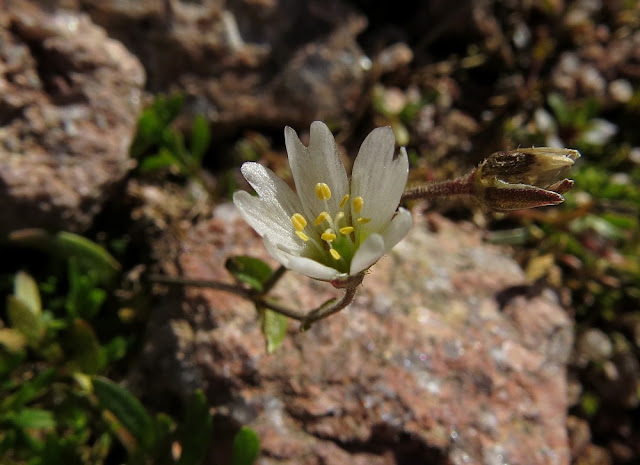 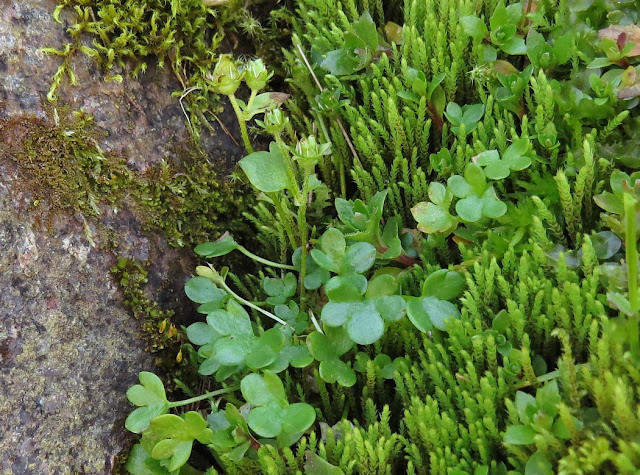 This is that target species, Highland Saxifrage growing on the side of a dark wet gully. We thought we weren't going to find it as we were initially looking for the white flowers. I realised that if it were past flowering it was going to have to be identified by looking for the distinctive leaves and eventually I spotted them nestling amongst some moss,the flowers frustratingly looked as if they had only just gone over. A very rare plant though so great to find! 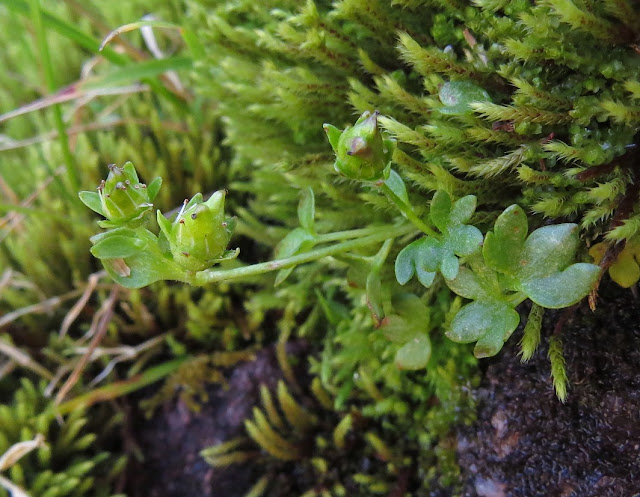 Another species I'd been very eager to see was Alpine Speedwell,we'd seen a few tiny specimens on The Cairnwell but they were all in seed. I was expecting the plants here to be very small too but they weren't. They were much bigger than the Cairnwell ones (but still small) and they were plentiful too, the grassland below the crags was studded with small groups of the deep blue flowers. They were so much better than I'd expected. 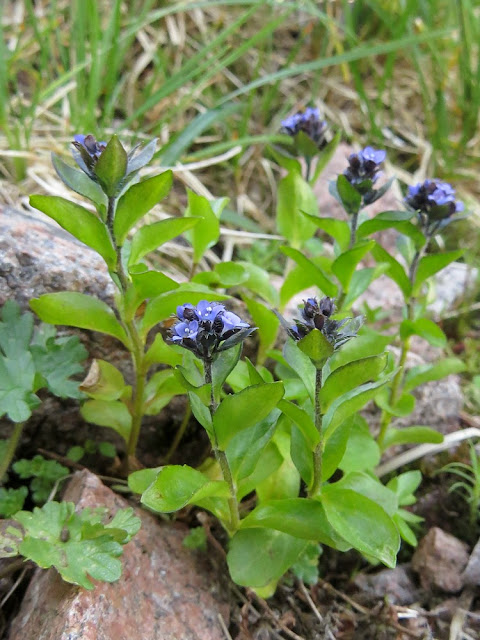 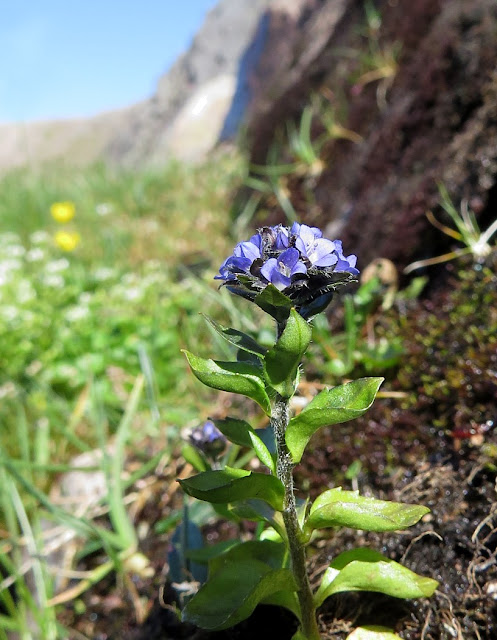 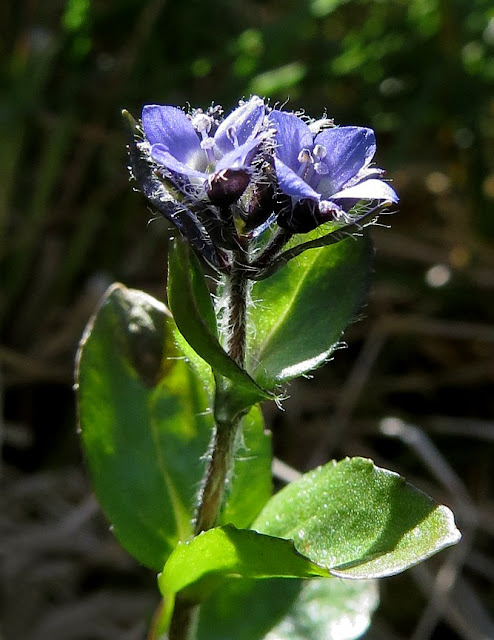 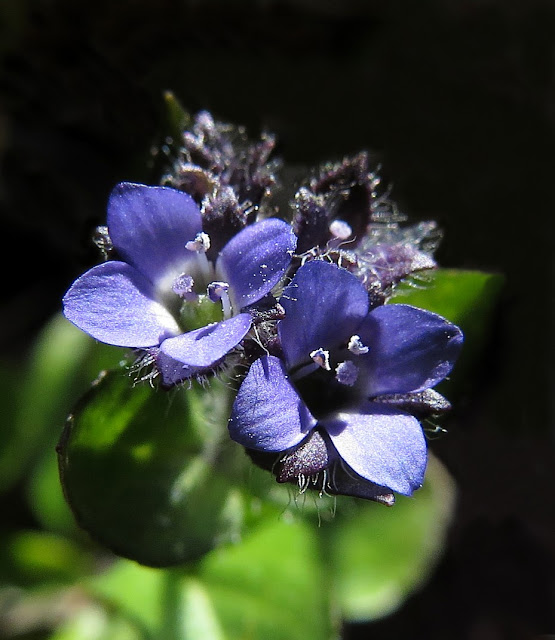 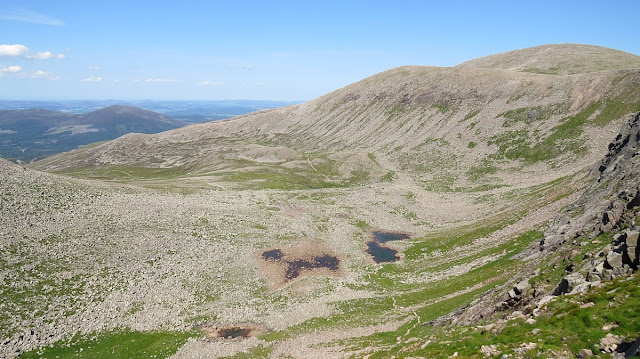 A view from the Goat Track to the floor of the coire. Whilst we were sitting here having a rest and taking in the view a summer plumage male Snow Bunting flew onto some crags fairly near to us and gave superb views. I didn't have my good birding camera with me and had the settings all wrong on the one I did have but I had to get a few record shots of this magical moment. I knew that they breed up here but I didn't expect I'd see one! Best bird of the year by far! 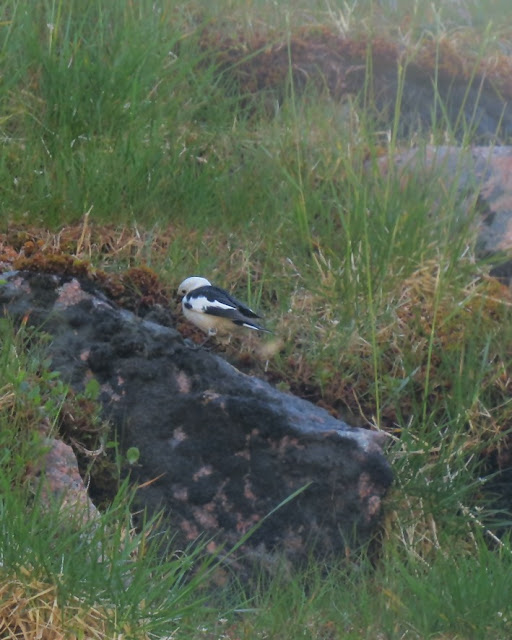 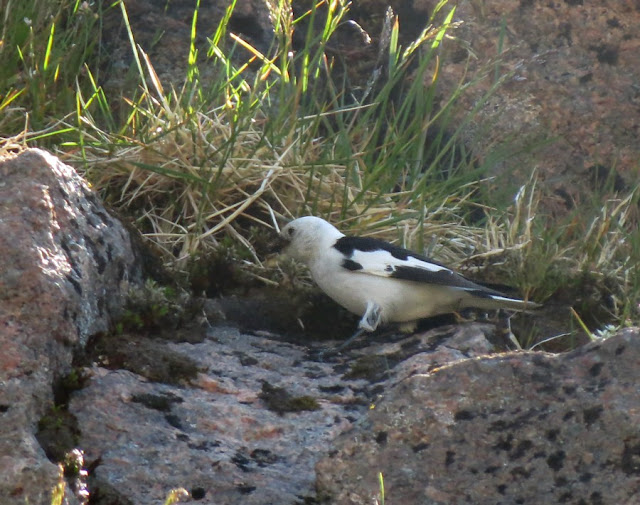