Another Sunday meant another trip over the border into Dorset. This time the destination was Dancing Ledge on the Purbeck Coast to look for Early Spider Orchid. I'd visited here before back in 2010, so after five long years it was about time I had a second look at them. It was a couple of weeks earlier in the season this time but there were plenty of flowers on show, you need to 'get your eye in' though as  they are pretty inconspicuous.

We had a nice surprise encounter on the way there. We were just leaving Lyme Regis when I spotted two Red Kites flying low over the road, we slid to a stop at the side of the road and I managed to get a few shots of them as they passed overhead. Unfortunately they were both going away but one of them kindly looked round at me. 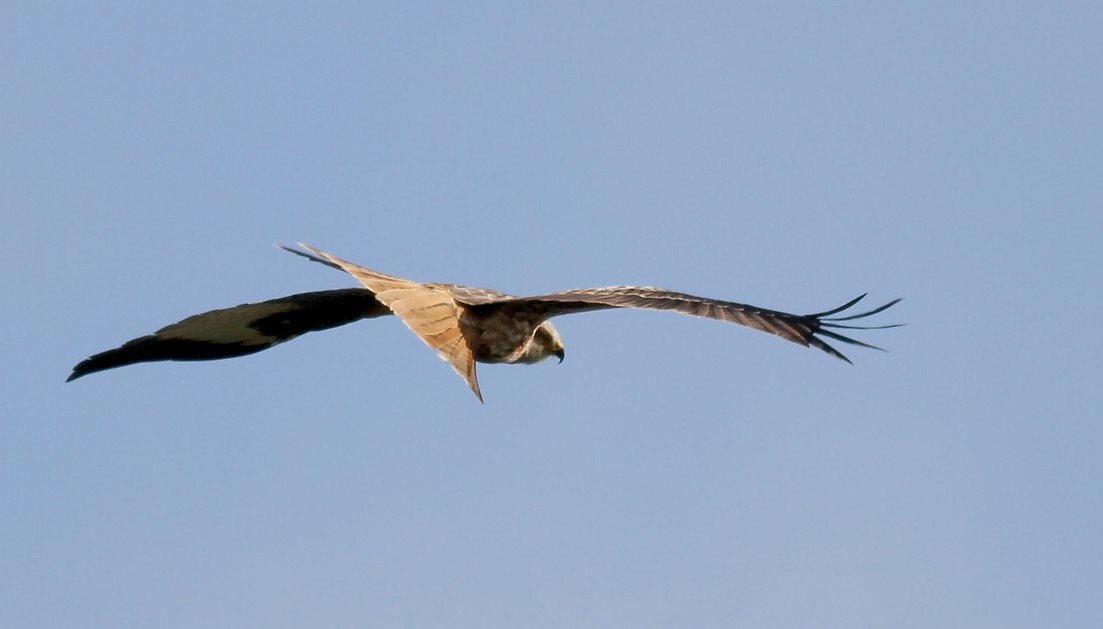 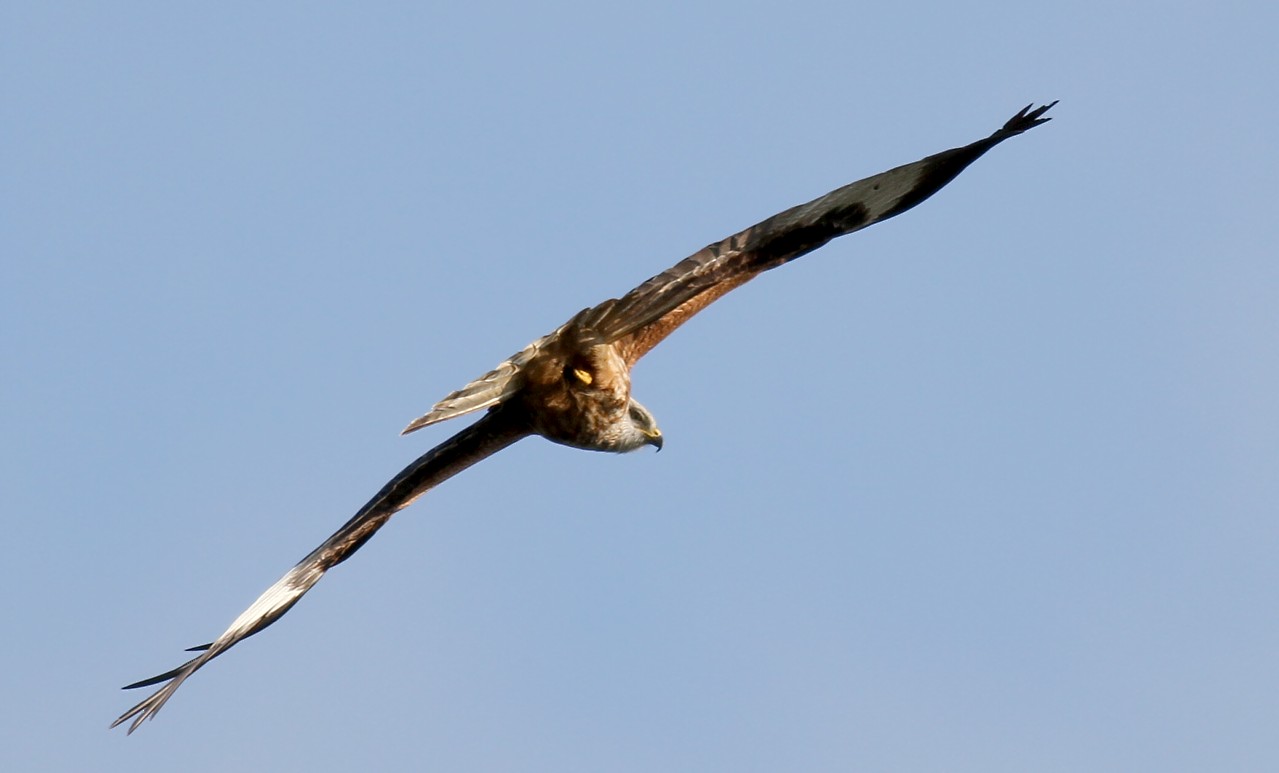 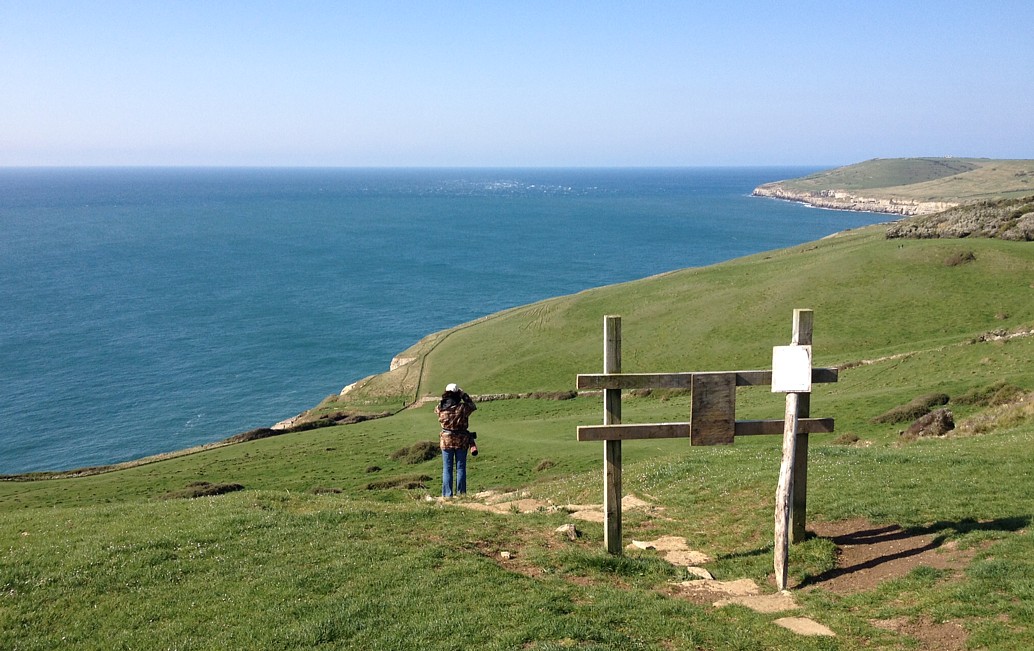 At the top of the path down to Dancing Ledge with St. Aldhelm's Head in the distance.
The Early Spider Orchids grow on the short turf of the lower slopes. 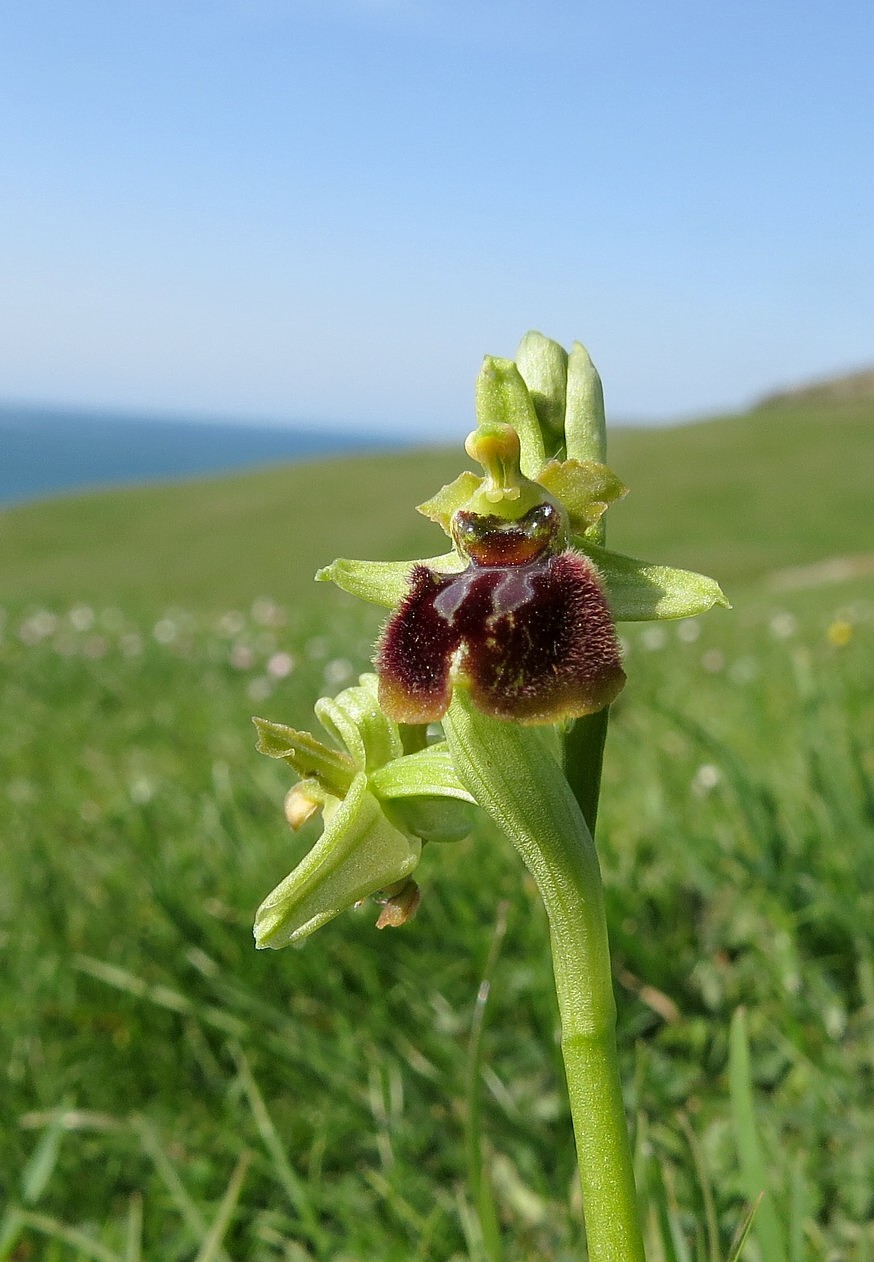 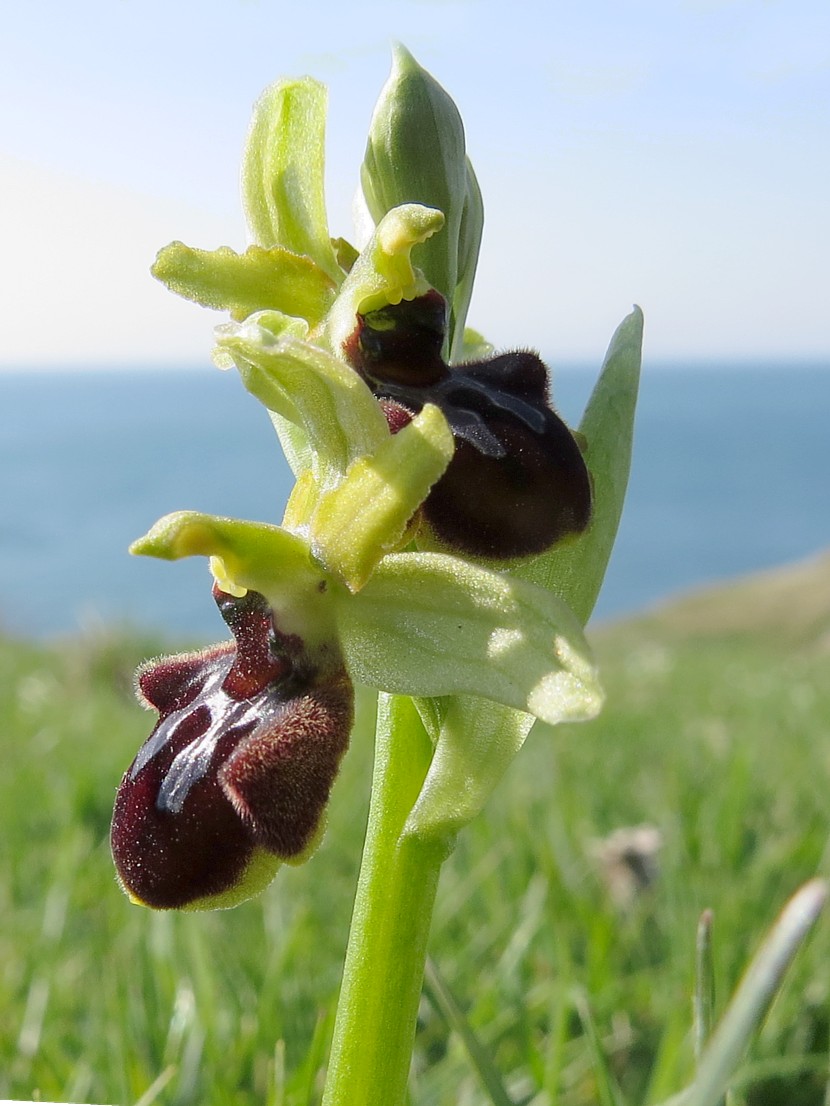 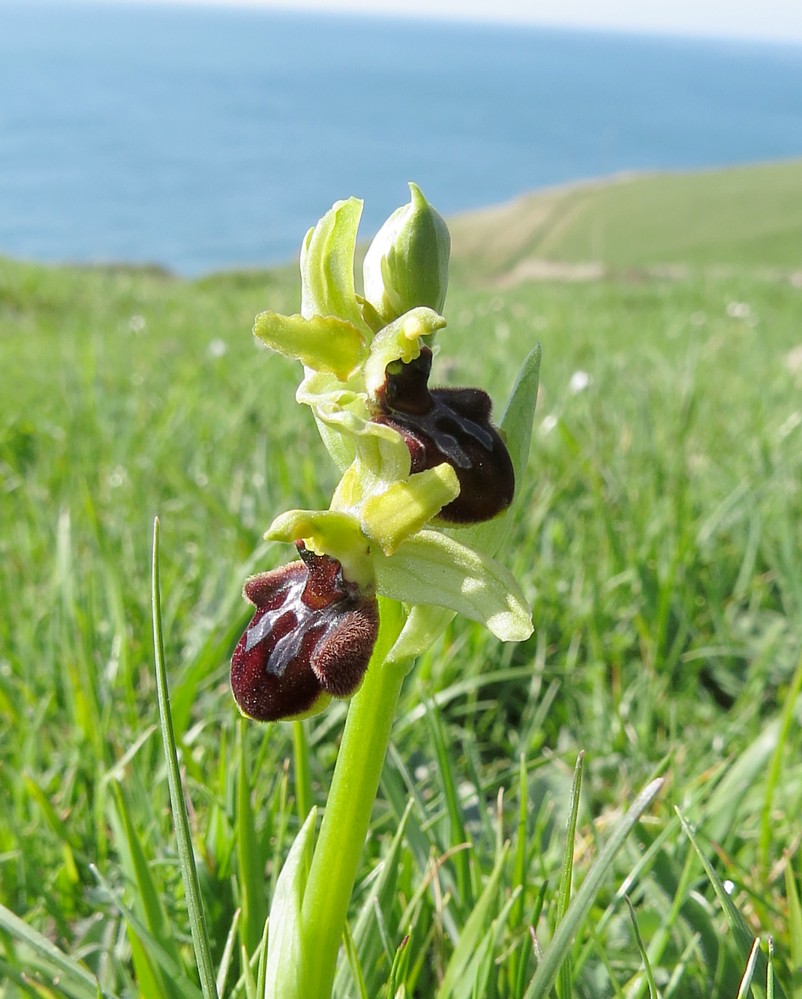 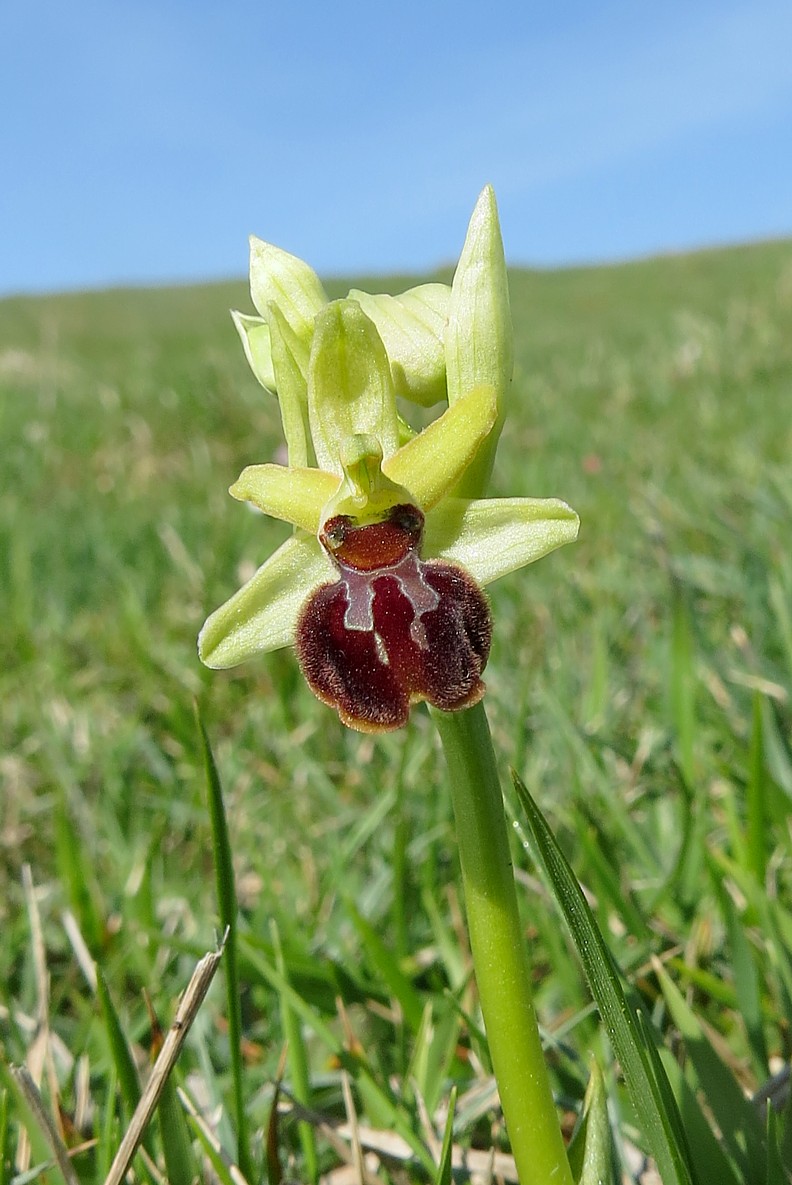 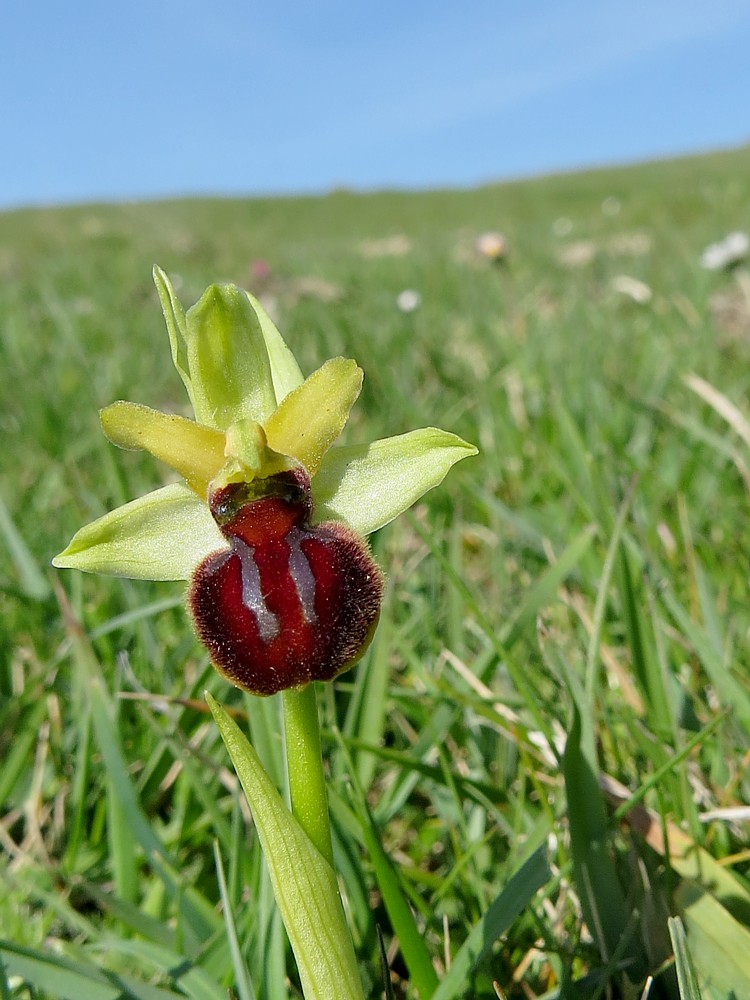 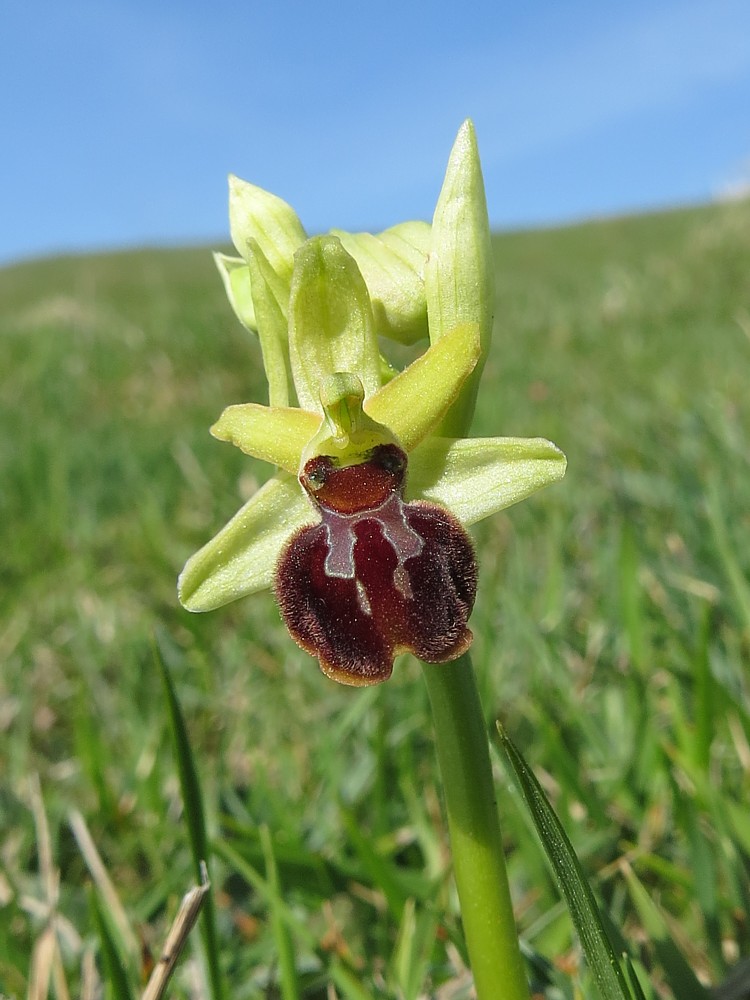 Early Spider Orchid - Ophrys sphegodes
This flower looks a bit like a furry smiling frog...or is it just me?!

I took a few shots of some with my 400mm lens too. The photos have a very different feel to them, they seem to have a nice dreamy quality, due to the out of focus background and some lovely bokeh. 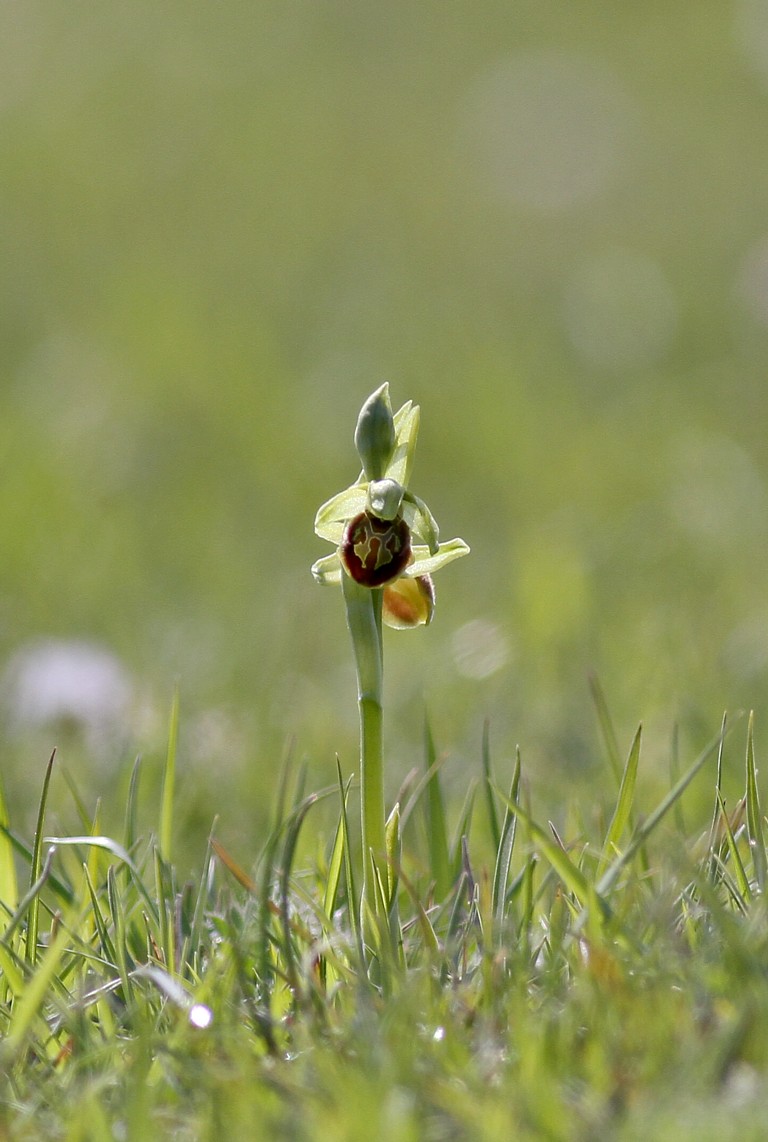 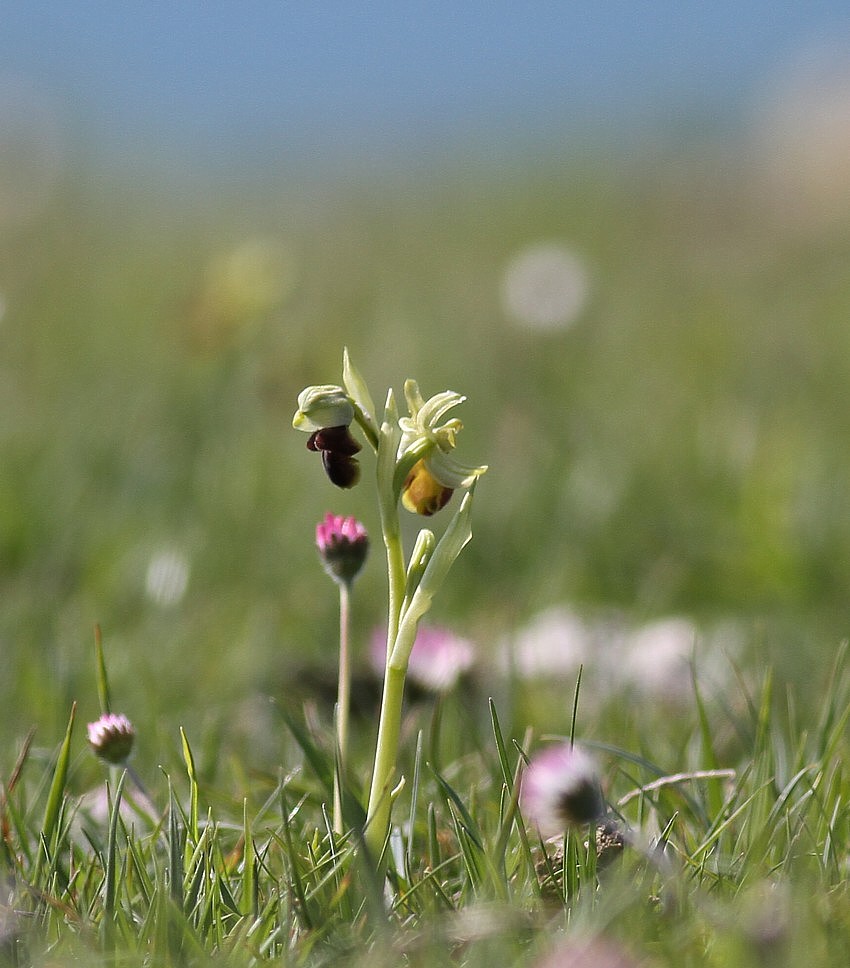 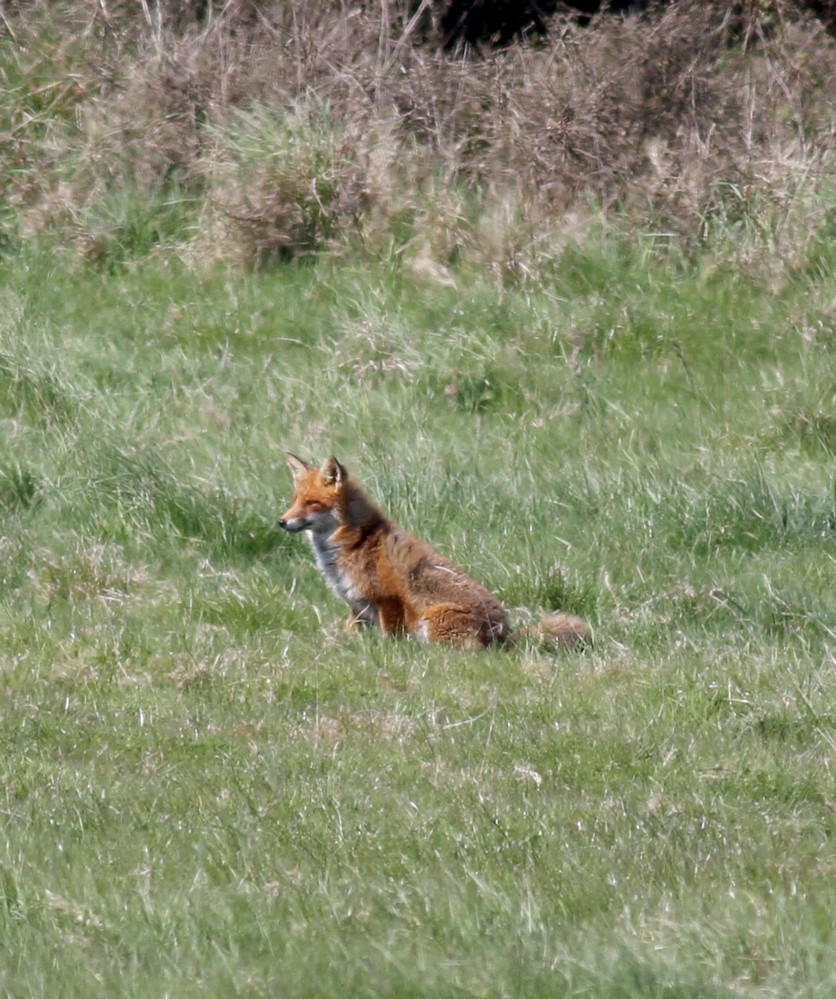 I was surprised to see this Fox out and about at lunchtime especially considering the amount of people around.

Our second close encounter from the car came on the way home. We stopped in a lay-by on the Dorset Heaths and there was a male Dartford Warbler singing away in the gorse bushes immediately next to us. I took a few shots before he just melted away into the the vegetation, like they do. 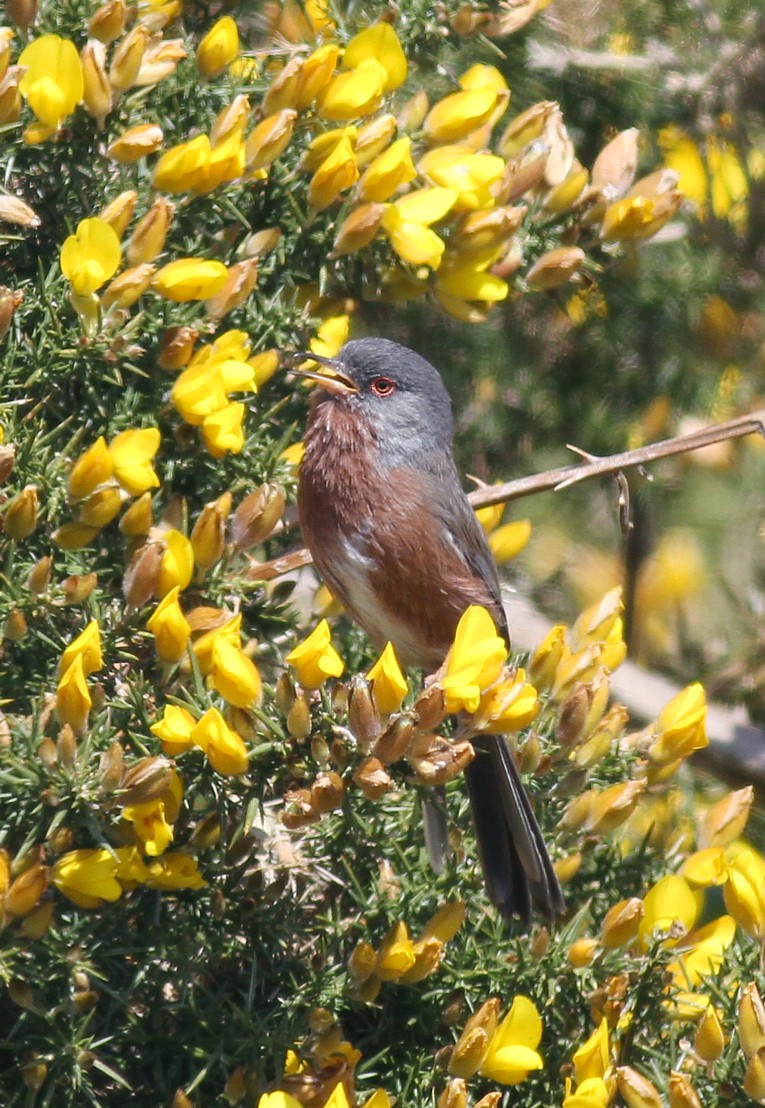 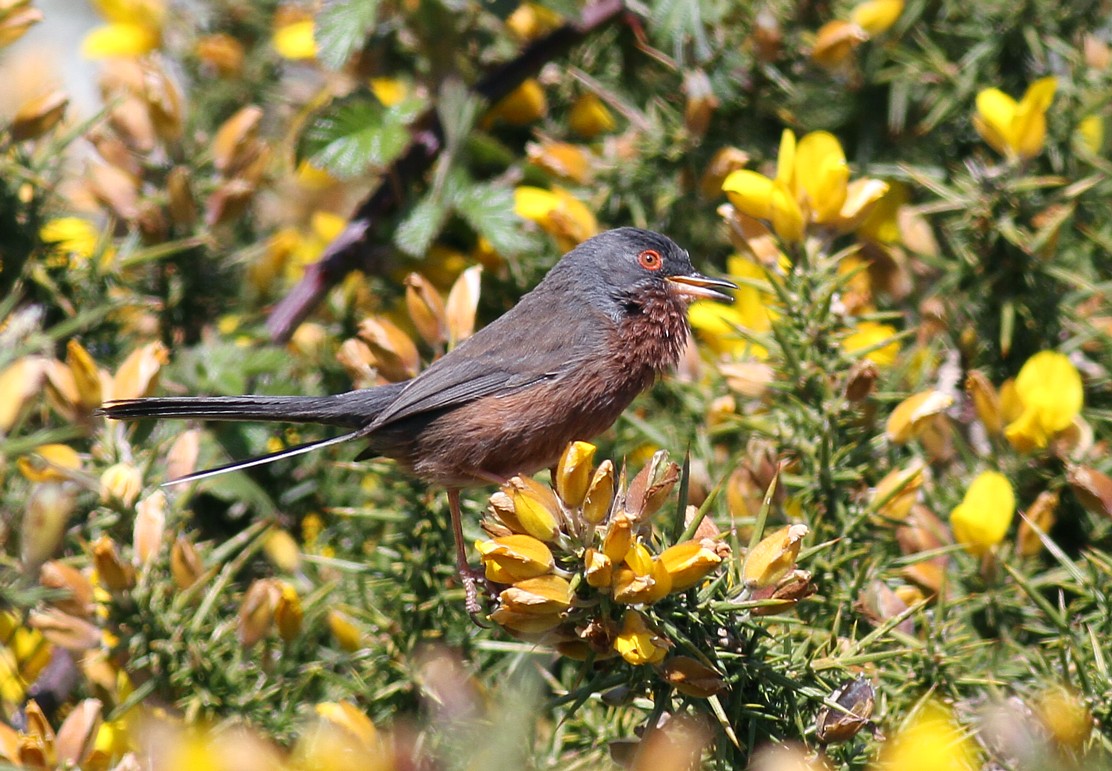 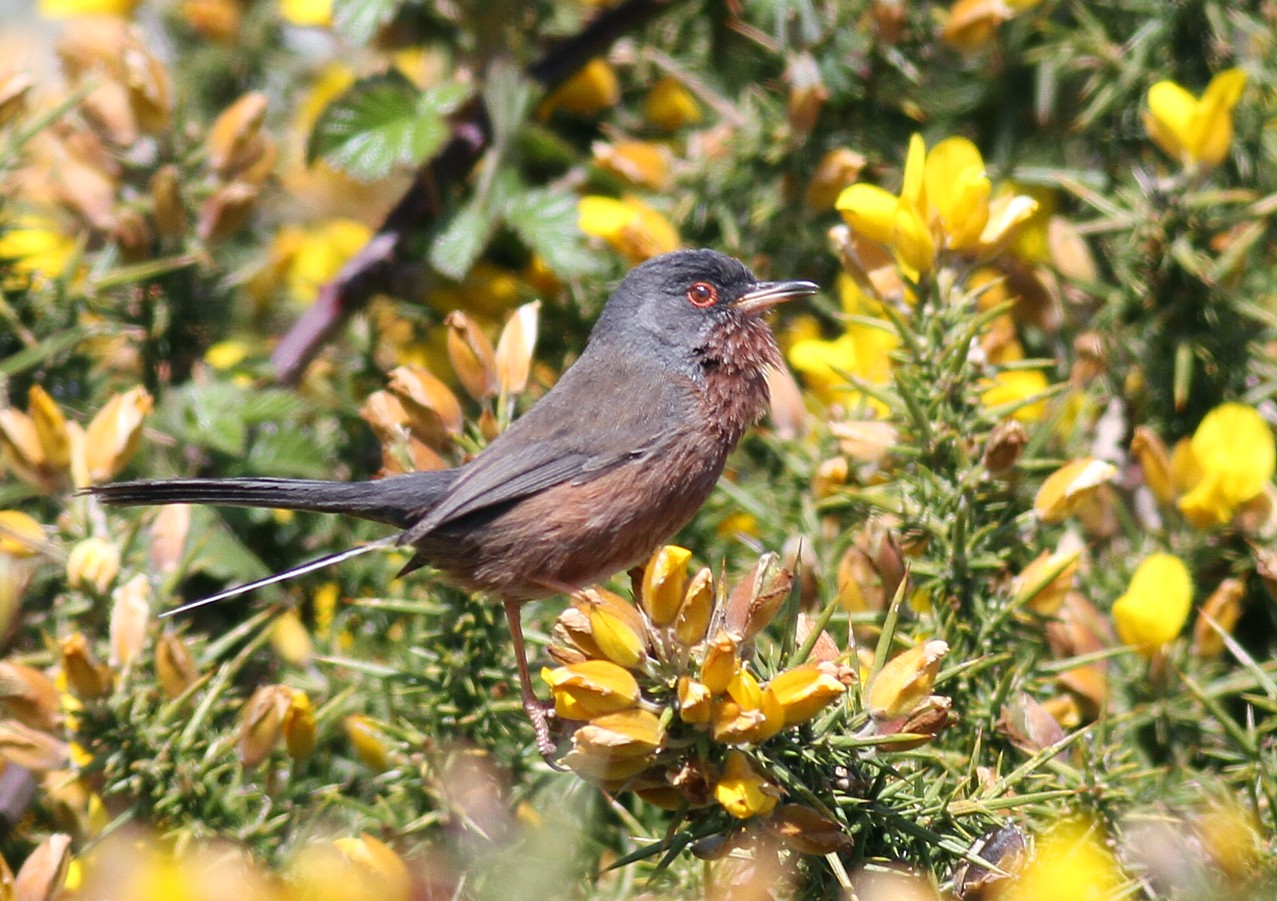 Finally a couple of photos from this morning's visit to Salcombe Hill. It was pretty quiet again but saying that I wasn't able to give it very long. 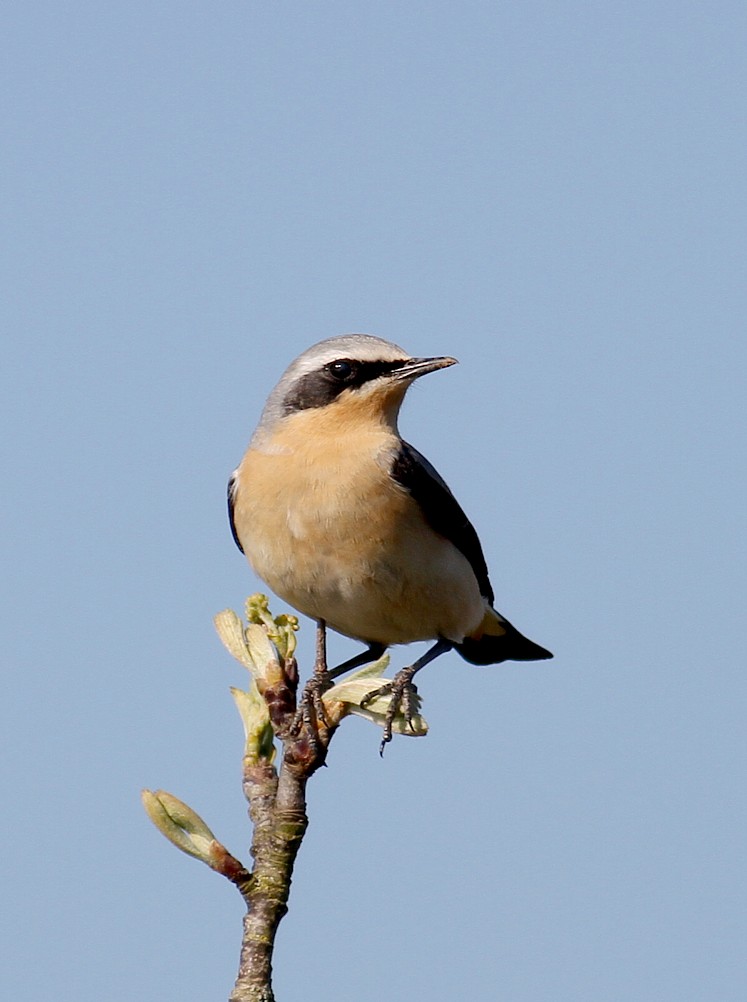 The predictable Wheatear .. but this time in a tree. 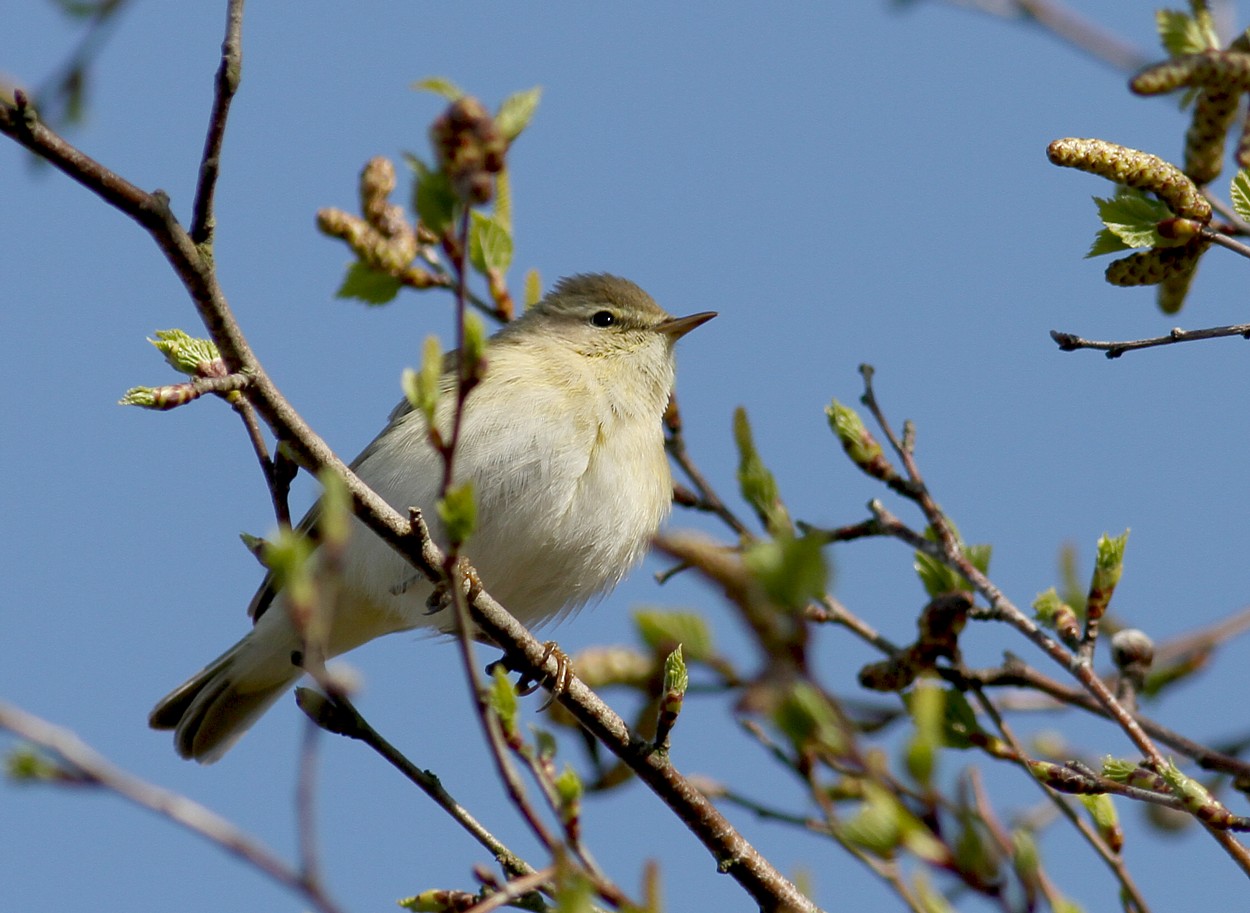 Posted by Karen Woolley at 9:13 pm

"Furry Smiling Frog"?? Didn't you describe the fly orchid as being like a purple teddy-bear? You should pop in to Higher Hyde Heath DWT. The sand lizards are within 100 yards of the entrance and bold as brass while they are mating. The reserve really is a hidden gem where you can see smooth snake too. Perhaps next time when you're driving back from the purbecks.