Common Yellowthroat Twitch and A Good Day on Patch

I wasn't going to go for the Common Yellowthroat, I'm made of sterner stuff than that I thought. I'm not! I cracked on Saturday evening when I heard from Bun that we'd been offered a lift up there with ( a Devon birder*). We met up near Exeter early next day and arrived at the twitch around mid-morning to the news that the bird had been showing very well earlier. So even though it had become a bit more elusive we were very hopeful. We waited a good while for our first views ( well mine and (Devon birder's) Bun had already been on day one (obviously! ;-)). My first view of it was when it flew out of the hedge it was hiding in and across the field. It's flight-path took it directly over my head, very low too, watching it in bins I nearly ducked!! We had several superb views while it was in the next hedge with it periodically popping out and foraging in the long grass. I thought its behaviour was more akin to that of a Dunnock than a warbler. What a stunning little bird though, really has the wow factor!! No photos of the bird because it never stayed in view for long enough while we were there (Bun suggested that was a good thing because I'd be able to do one of my superb paintings of it instead). A few photos of the twitch though.... A great day out, a great bird, and good company who could want more! 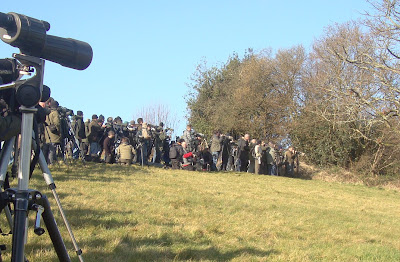 The scene that met us on arrival. The bird had gone to ground.
I'm not surprised as some people seemed to be getting a bit close.
Not difficult to guess which bush it was last seen in is it? 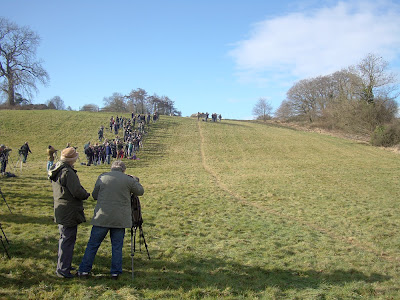 The bird relocated to the hedge in the right of this shot, most people kept a sensible distance and it showed intermittently. As you can see near the top of the hill, some people just have to get closer than everyone else. I wonder if they all have anything in common?  Let's see shall we?.... 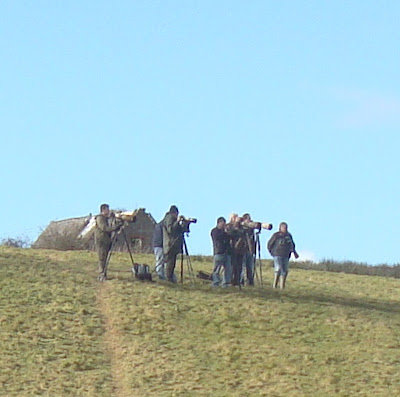 Crop of the previous photo. Speaks for itself I'd say ;-) 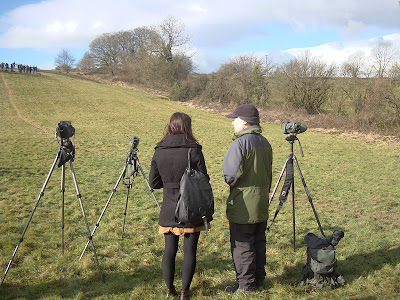 Luckily I noticed a 'journo' striding over towards us, Bun and me made a hasty retreat (see our abandoned scopes) but (Devon birder) agreed to answer her questions.  Perhaps he's never had dealings with the press before? Oh well, he'll learn!.... 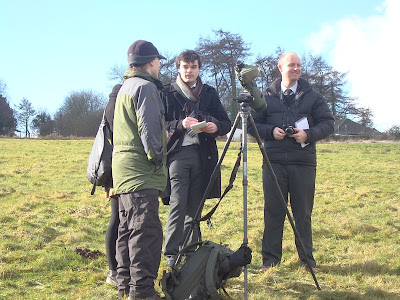 OMG!! More 'journos'...
He can't get enough of them! Oh well, he will learn! ;-)
See article here:
They've got the WRONG species of bird ( Yellow-throated Warbler) and (Devon birder) did you really say it would have got lost while migrating in the WINTER!!? Thought not! :-)
And now by popular demand.... 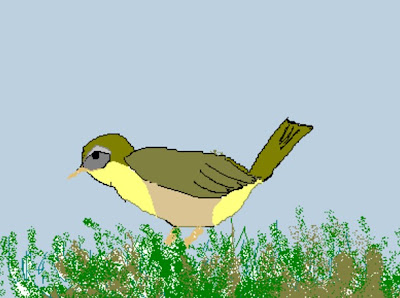 Common Yellowthroat.
I couldn't find my paints after the move so I had to have a stab at it on the computer.
It looked exactly like this..obviously!
Today is the first real chance I've had to spend a good few hours out on the patch. I have popped out now and again over the last couple of months and mostly dipped stuff. Especially the overwintering Woodlarks at 'site x', which I think I've dipped six times so far. Admittedly I haven't given it long enough or put in nearly enough effort, so this morning I did just that and after about 30 minutes searching found them. They are incredibly difficult to spot in the manured field, they blend in beautifully. 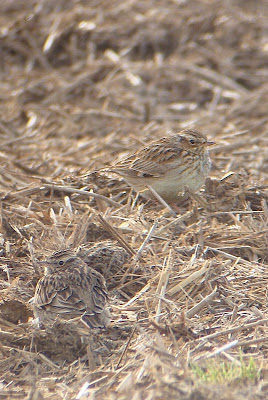 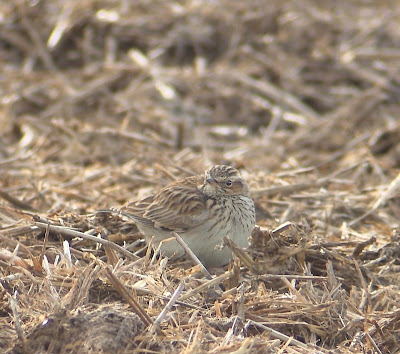 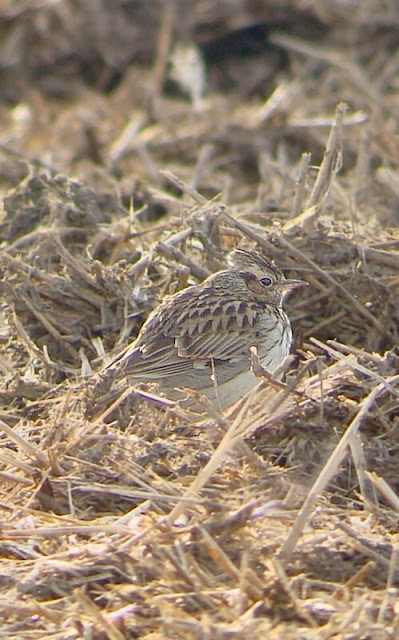 After getting cracking views of these little beauties I felt calm and relaxed enough to pop down the Post Office and merrily hand over £917 to pay for all our final utilities bills from our old house. It seems we hadn't paid for any electricity since last May! I mean if they don't send you a bill you don't really notice do you? After the reality of how much I'd just spent sank in  had to have a lie down in a darkened room for a bit. That didn't really work though, what I needed was more patch scarcity therapy. Oh boy did I get some! My first stroll along the Coly for an absolute age and there it is, a Dipper, and not just a Dipper.... a singing Dipper! I even managed to point a camera at him before he noticed me. Once he had though, he did that typical Dipper thing of always staying about 100 meters in front me as I walked along. 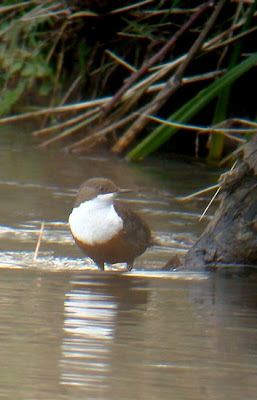 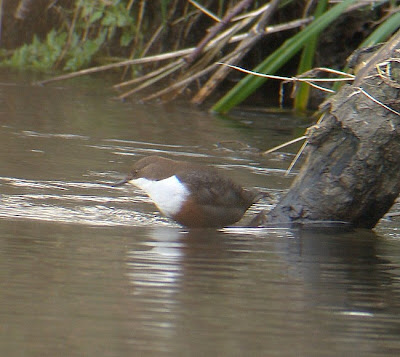 One of my all time favourites...I could watch one for hours....given the chance!
I got up at 4am this morning to do a spot of stargazing. It's really awe inspiring to sit out under the stars in the wee small hours now that the street-lighting is turned off. Saturn is showing really well at the moment and I had a stab at digiscoping it but it isn't as easy as Jupiter being much smaller and fainter. It looks absolutely stunning through the scope though. 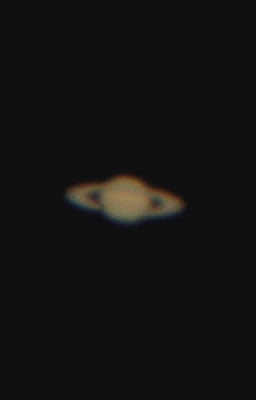 'Garvan Haag, 29, travelled from Devon and said "The bird could have got lost when it escaped from Dai Evans' aviary in Newport. It would have been caught by some trouble-making 'erbert hoping to sell it in a Weymouth carpark, a terrifying ordeal...'

And did you notice the photo? Yellow-throated Warbler. Even I might have been tempted.

Very nice to see a post on this blog, K!

That quote was condensed* from the standard paragraph about transatlantic vagrants - autumn migration, storms, possible ships, and so on.
Apparently I can't sue them as I 'don't have a reputation to be damaged'. Oh well, at least they didn't publish any horrific photos of me... ;)

Thanks Gav, I always say I'll endeavour to get more posts up on here but don't seem to succeed somehow..must try harder! :-)

Tom. Can't say you weren't warned! Sorry about the 'horrific' photos... ruined my chanced of being invited again I take it!? ;-)