A few photos from Sunday's trip to Alners Gorse in North Dorset. The target species here was the valezina form of Silver-washed Fritillary. In fact the target site was originally Lydlinch Common, but a quick stop to look at Alners Gorse on the way there, sort of ...  lasted all day! It was that good! We saw a beautiful valezina within ten minutes of arriving, she kept visiting the same bramble patch for hours but was surprisingly tricky to photograph. Lots of Purple Hairstreaks here too, feeding low down on the flowers of Alder Buckthorn. There were also White-letter Hairstreaks, but these were very elusive in the increasingly cloudy weather. 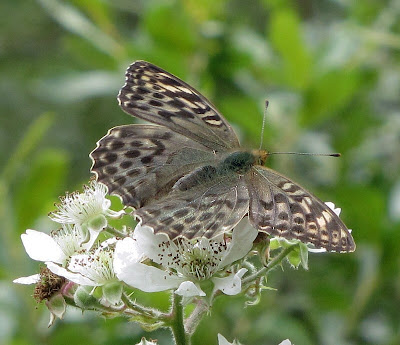 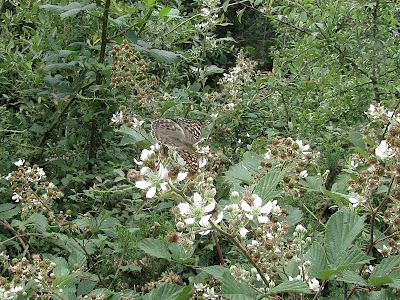 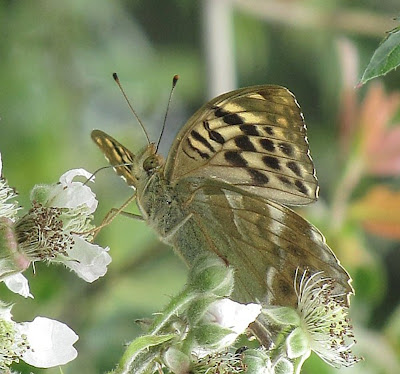 The upperwing, depending on the light, looks to have either a greenish or bluish sheen. The underwing is supposed to be green and dusky pink but I couldn't see any pink on this individual 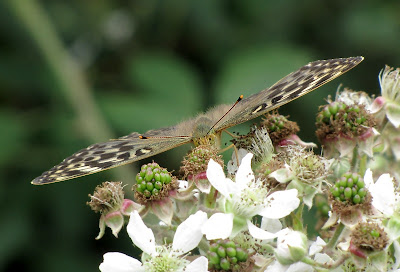 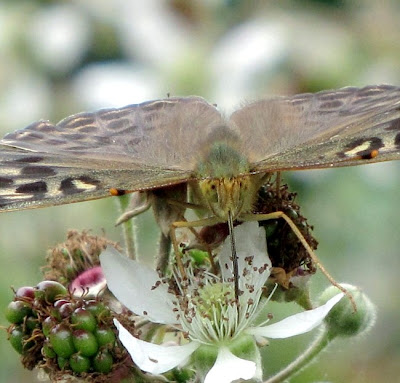 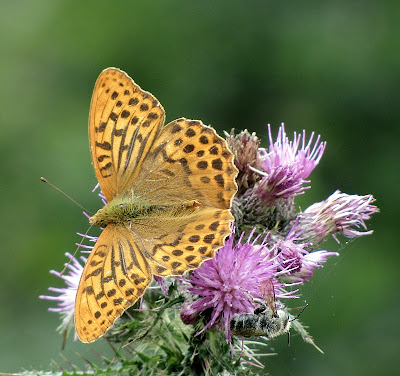 A male of the usual colour ( all valezina types are female). Males don't find the valezina form as attractive as the normal form which keeps their numbers low even though the gene causing the colour difference is apparently a dominant one. We watched her for well over an hour and several males passed close by her but didn't seem to even notice her.... 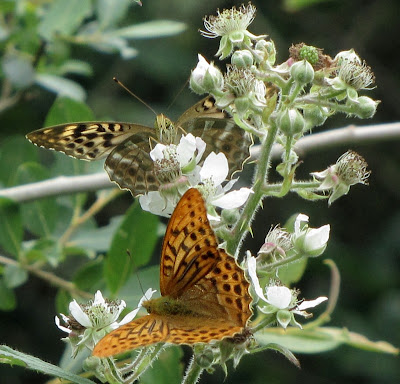 ...like this one, he only stayed a second or two and didn't pay her any attention. 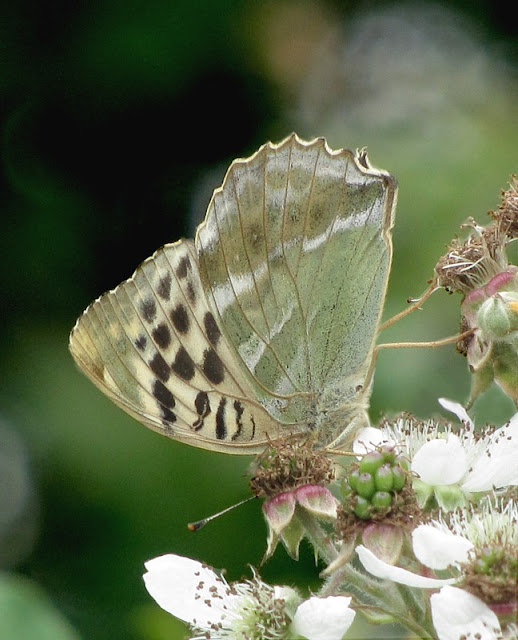 Another view of the beautiful underwing, shame she's got her head behind a bramble hiding her buggy face! 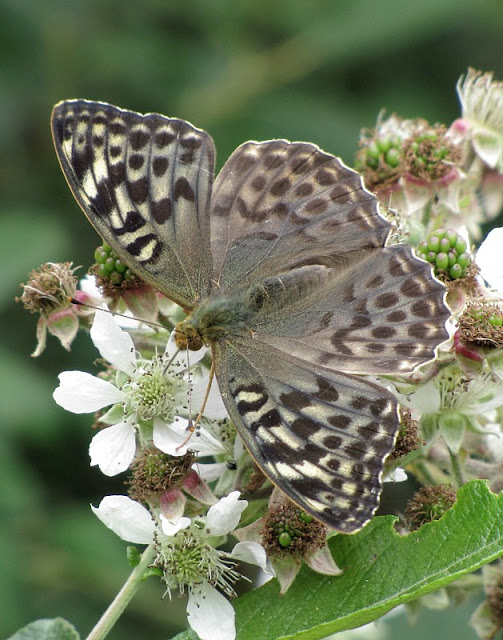 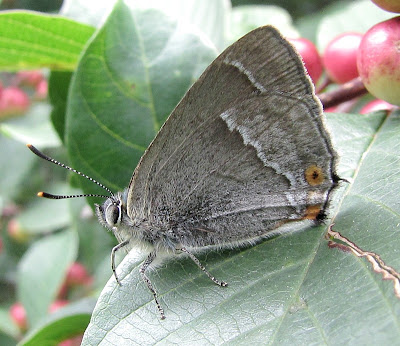 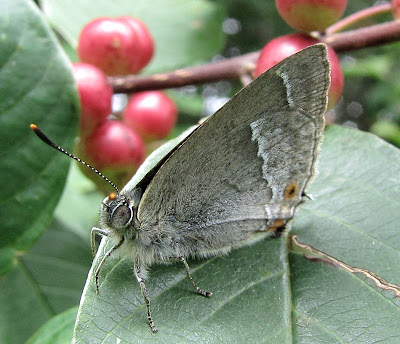 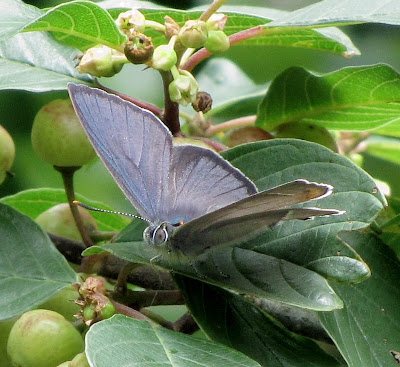 He even showed off his supreme purpleiness! 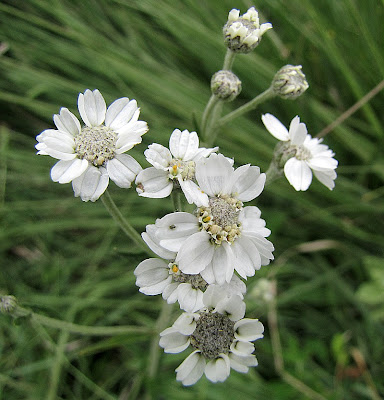 A photo of Sneezewort... for no reason other than because I like it. 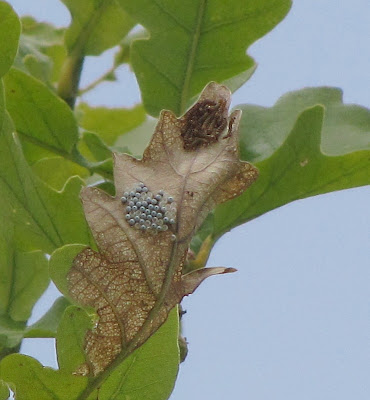 Not at Alners Gorse but seen yesterday whilst not seeing White-letter Hairstreak somewhere else. I saw these, what I assume to be moth eggs of some sort. There are around sixty of them and twenty-five have hatched. At the top of the leaf you can see the tiny new caterpillars huddled together, although one brave individual on the right is branching out on its own! 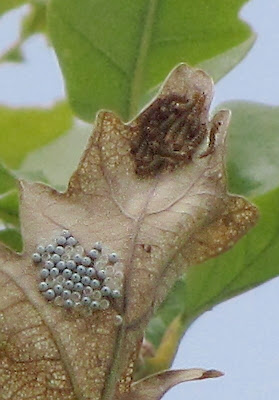 Closer but blurrier view. Anyone have any idea what they might be?
Posted by Karen Woolley at 10:34 pm

Super shots Karen of the valezina form ... still waiting to find one on my local patch.