Up until yesterday I'd only ever seen one Hawfinch and that was way back in January 2009 at Felbrigg Hall in Norfolk. I really wanted to see more and although there'd been a couple of sightings in Devon in the last few days I decided it would be better to go to a site where they are almost a certainty; Blackwater Arboretum in the New Forest. The birds come in to the arboretum and also the trees on the surrounding Rhinefield Ornamental Drive to roost but before disappearing into the dense foliage of the enormous conifers they sit out on the topmost twigs, preen and survey their surroundings. We arrived at a few minutes past 2 o'clock walked through the gates into the arboretum and within about thirty seconds Bun had spotted our first Hawfinch. We saw seven or eight in total, there were seven birds in one tree at one point too. By 3.20pm they appeared to have all gone to roost as it was a particularly dull afternoon. I had only planned the visit for yesterday because the forecast had been for a fine afternoon with plenty of blue sky. That didn't happen though. Typical! Another quality forecast from the Met Office. It was only disappointing from a photography point of view though because you could see the birds well and the scope views were superb. The problem was that with the birds showing in the top-most-tippy-top twigs of the tallest trees it didn't matter how beautifully they posed they were always horribly backlit. I had a stab at it anyway though. I just can't help myself! I'll definitely be going back on a sunnier day because it's a wonderful place, as well as the Hawfinches we saw Crossbills, Lesser Redpolls, Siskins and Bramblings. There are Lesser Spotted Woodpeckers too. Allegedly. Then there're the trees themselves, some of the tallest and oldest Douglas Firs in the country grow here along with several Giant Redwoods (Wellingtonia) and Coast Redwoods. We didn't get to see the tallest trees because the trail was closed due to Rhododendron clearing after an outbreak of Sudden Oak Death. 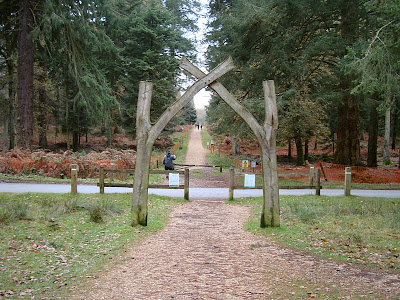 The entrance track to Blackwater Arboretum .
You can see all the lovely orange fencing marking the out of bounds areas.
The three people in the distance beyond Bun are also birders, of which there were surprisingly few on site. Seven I think including us. There were scores of non-birding visitors though it's an extremely popular spot. 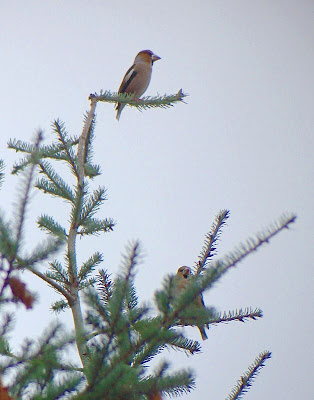 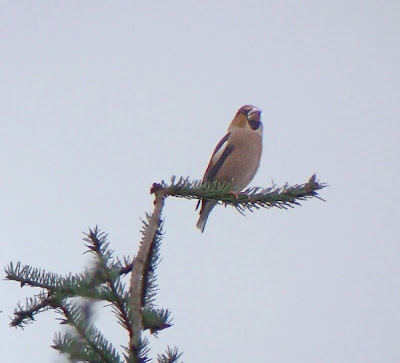 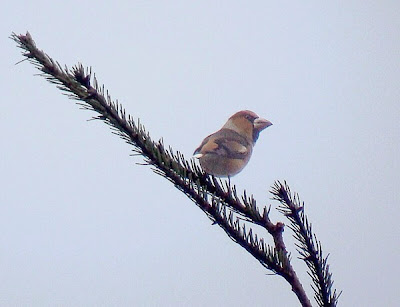 Typical views of the the birds in the top of a Douglas Fir.
(actual views were clearer than these naff photos would suggest, but you get the idea) 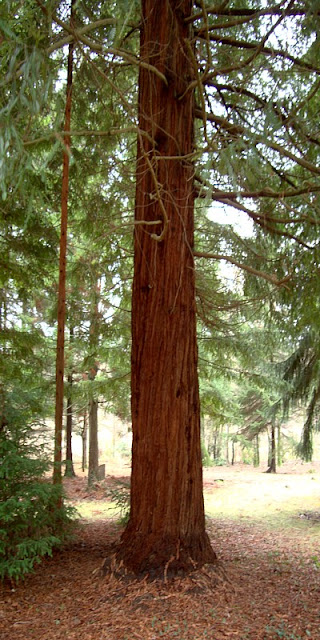 Coast Redwood.
Apparently this tree is over 80ft tall!
Just a tiddler then, because that makes it around 300ft shorter than the tallest Coast Redwood in California! 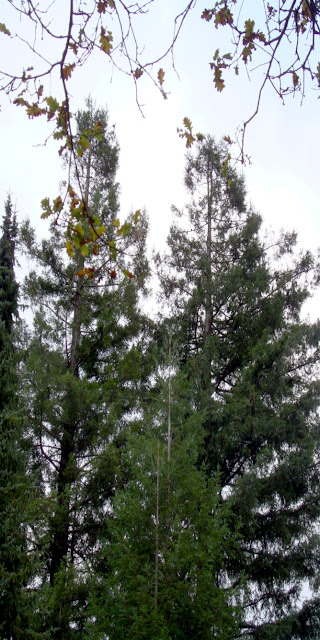 Here's the rest of it along with a taller specimen alongside.
This appeared to be one of the Hawfinches' favourite trees, with seven in it at one stage. There are two in it in this photo I've over-sharpened them so that they stand out if you view the full size photo. 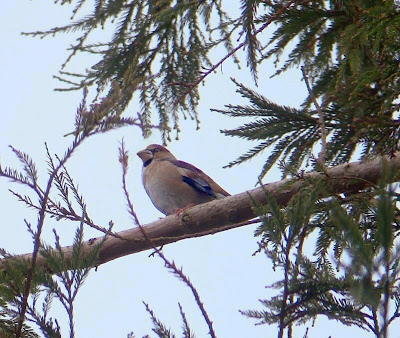 Closer view of the bottom bird. This was digiscoped from the same vantage point. Amazing reach!
Because I didn't get the photos I'd have liked it gives me the perfect excuse to give another airing to the one I took in Norfolk  almost two years ago. I can still vividly remember the excitement and sheer joy of seeing my first Hawfinch especially so when looking at this photo. 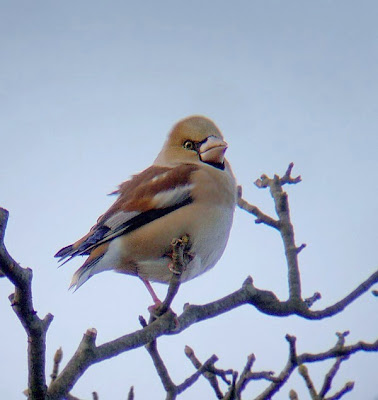 Another remarkably uneventful dog-walk today, few birds seen and nothing of particular note. This afternoon I also popped 'next door' to have a look around the harbour. Just the one Common Sandpiper on show here catching and eating Ragworms although they seemed to be attempting to fight back! 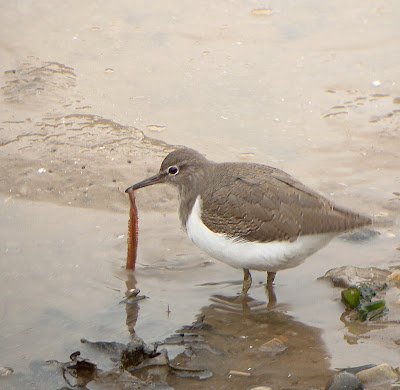 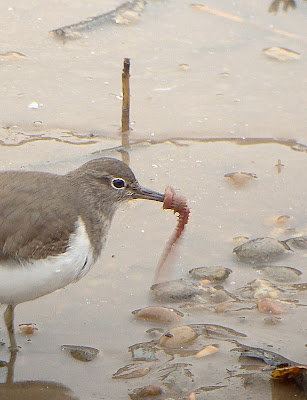 This Ragworm kept wrapping itself around the birds bill, but it was eventually swallowed. I couldn't get an un-blurred shot as my camera simply isn't fast enough to cope with movement in the poor light we had this afternoon. Fortunately though after swallowing this tricky customer the bird had a bit of a rest....I grabbed my chance. 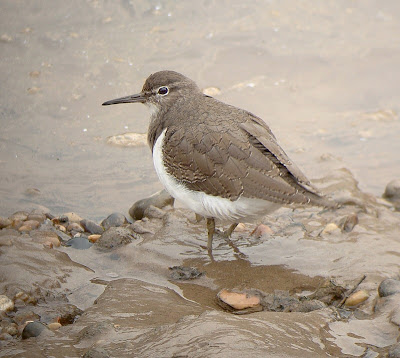 Posted by Karen Woolley at 9:16 pm