Seeing as it's so very quiet on patch at the moment, the much put off visit to Chew Valley Lake seemed a good option on Sunday. Yes, the Long-billed Dowitcher hadn't been seen on Saturday but there would still be other stuff to see, lots of nice ducky stuff. Splendid!

After a nice lie-in I popped round to Bun's where I had a quick look at some of the night's moth catch and then, after Bun had finished eating his gourmet breakfast (don't ask!) we set off for North Somerset. It took just over an hour and a half to get to Chew Valley which wasn't too bad. We didn't need to enter any of the permit only areas as most birds were easily visible from the public viewing areas.

What was there? Well, hundreds and hundreds of assorted ducks, 'millions' of Coots, a few Grebes, ( unfortunately only Little and Great Crested though) and like many places at the moment just a handful of waders. These consisted of a couple of Common Sandpipers, a few Lapwings, five Blackwits, a Ringed Plover and absolutely no Long-billed Dowitcher! :-( There was however, an ample sufficiency of ice-cream vans, they were everywhere! I wonder if they're a year round phenomenon?

I did get to see the bird I was hoping for here, several of them in fact and very, very nice they were too! Here's a shockingly bad photo of three of them hiding amongst 'the dross'. 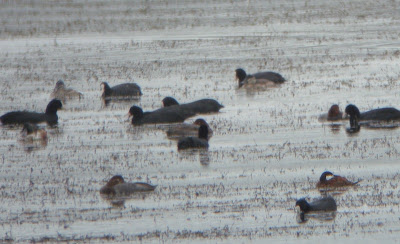 Ruddy Ducks - the 'Marmite' of the UK Duck scene.
Personally I love 'em and hope they don't 'disappear' from Chew Valley Lake any time soon. 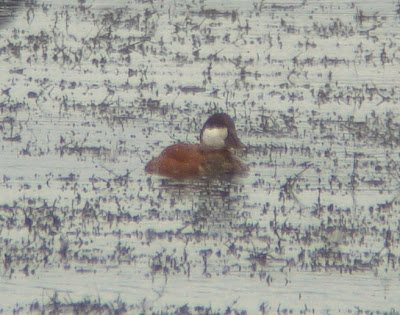 Live long and prosper!
We also saw a Chew Valley Lake standing dish, the drake Ferruginous Duck. He was deep within the midst of a massive flock of Pochard and Tufted Ducks, which were all sleeping, making him even more difficult to spot. He did wake up and 'show well' for a whole five seconds at one stage though, which was nice! He was way too distant for a decent photo, so to save me publishing another one as bad as the first in this post, and by 'popular demand' ( i.e. no demand whatsoever) I've done a little painting of him instead. 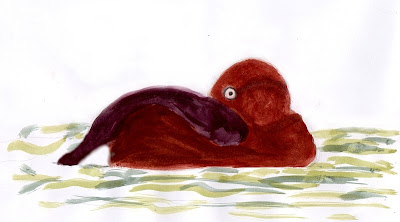 Whilst driving up to the carpark at Woodford Lodge, we were surprised to see two Muntjac Deer (both does) running about out in the open in broad daylight. They must have been recently flushed from some scrub I suppose. Best views ever of this species for us both :-) Amazingly one of them stood still for long enough for me to stop the car, find my bag, take out my camera, adjust the settings, point it in the right direction through the open passenger side window and shoot. I got one shot before she melted away into some bushes. It came out rather well considering. 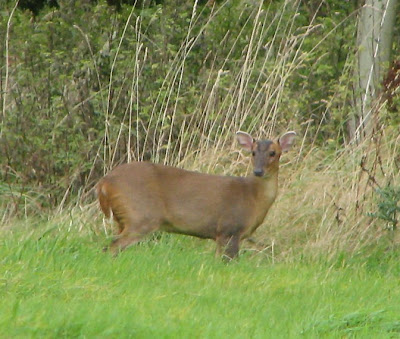 Muntjac Doe
Finally another couple of new moths for the garden, both coastal species, L-Album Wainscot, which is long overdue really because Steve's caught several of these over the last few weeks and his traps are only around 200 yards away from ours. Also Feathered Ranunculus, I think? 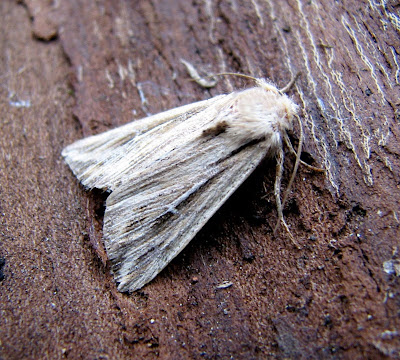 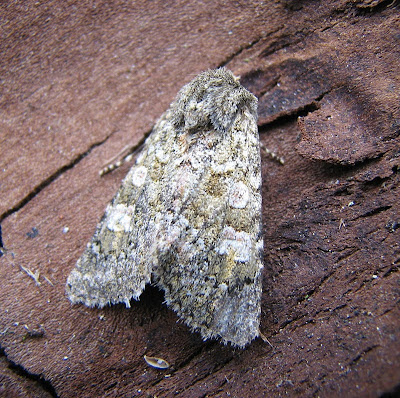 Feathered Ranunculus
Posted by Karen Woolley at 7:37 am

That last moth is a sumptuous specimen - I'd like a sofa upholstered in that.
Cute painting too.

Well done on getting to Chew, some good birds up there at present. Still wish I was on the Scillies though. Love the painting of the Fudge Duck...
Moths are superb. Well done.

Rob - It does look quite like a portion of a tapestry.

John - Talking of The Scillies, that's where I'll be this time next week! :-)

Thanks for commenting both.