Yes, I'm still here! It's been quite a long time since my last post but in the next couple of weeks I'm going to get all of my backlog from last year on here. I am really! Well perhaps not the fungi. I still have fungi photos I want to share from 2015 and 2016! I've had a bit of a poorly computer recently but my son has fixed and upgraded it for me ...... eventually! (He kept putting it off, so I kept putting off blogging). 2017 really was an excellent year not only for butterflies but lots of other interesting invertebrates and lots of top botany too obviously! So plenty to come. Firstly a short post about the Clearwing Moths that we've seen this year. Before this year I hadn't seen a single species of these elusive day flying moths, which isn't surprising because without a great deal of luck the only way to see most of them is by using a pheromone lure. We didn't get chance to try for all of the species this year but were successful with most of those we did. Five species were seen using the lures and one without. The one seen without the use of a lure was Lunar Hornet Moth. There were lots seen in June at Portland Bird Observatory after one was originally spotted on a mist net early one morning. Read about them HERE. I only managed to see one individual on the morning of June 27th. It was quite late in the morning and I was only just in time to get a photo as it soon flew off. It was already warming up its wings when I arrived and so my photos aren't the best. Brilliant moth to see and much bigger than I'd expected too! Hopefully there will be more this year. 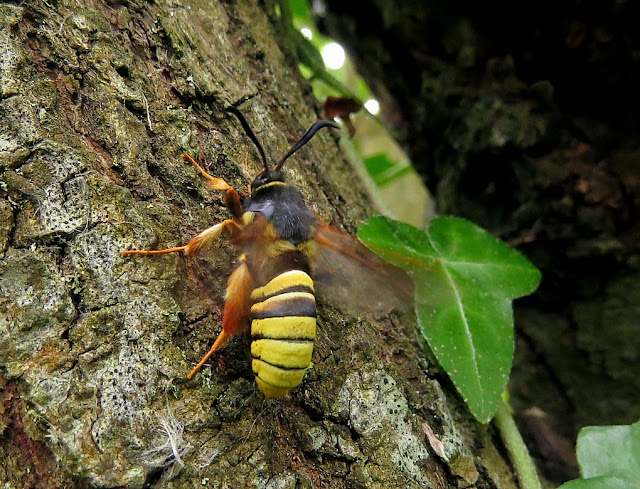 I'll list the others in the order that they were seen. Firstly whilst looking at Swallowtails in Norfolk on June 14th we tried for White-barred Clearwing. We didn't have much time and conditions weren't ideal but we did get a very brief visit and I managed a single shot of it. 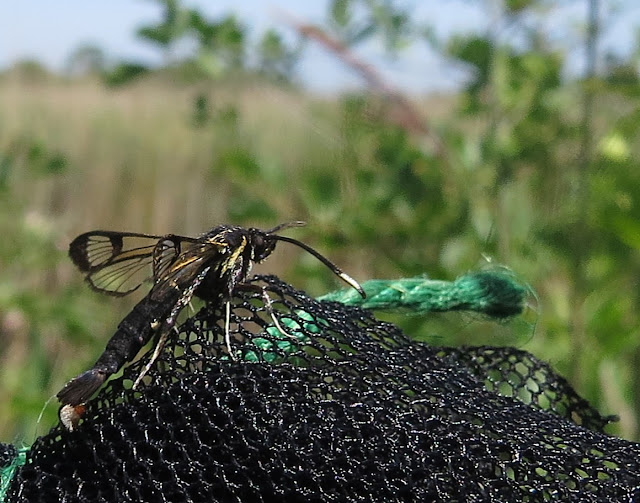 On June 17th we were at The Lizard in Cornwall looking for wildflowers and what better place to try for Thrift Clearwing. We stopped in a likely looking area at Caerthillian Cove and before we could even get a lure set up one had arrived. Just opening the lid of the storage box was enough! Once the lure was in place it attracted good numbers for a couple of minutes. After a while the hopeful males get wise to the fact that there isn't actually a female present and they fly off and seemingly disappear. We tried several different spots along the coast path and got similar results. So many clearwings were coming in I decided to try and get a flight shot of one. They are pretty small and I had to stand a long way off with my 400mmm lens but I quite like the end results. 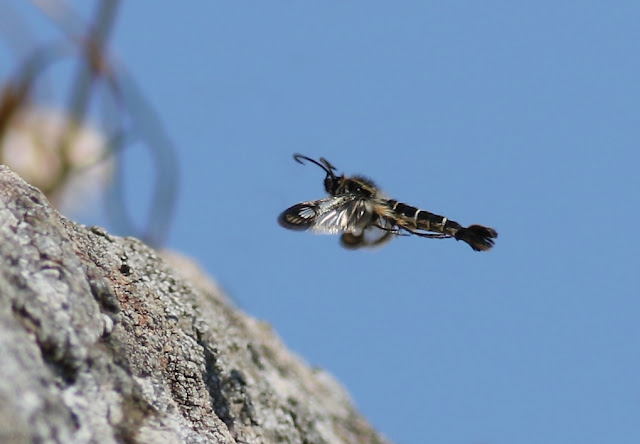 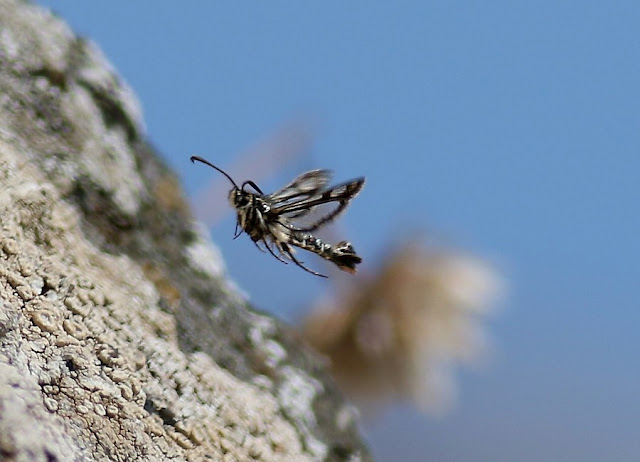 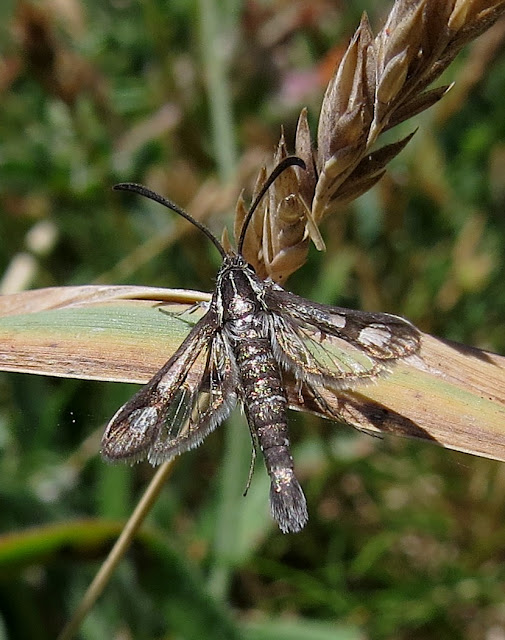 
We got excellent results with Six-belted Clearwing too. On two occasions once on a very hot June 18th on limestone grassland in Somerset and again on 5th July on Portland. 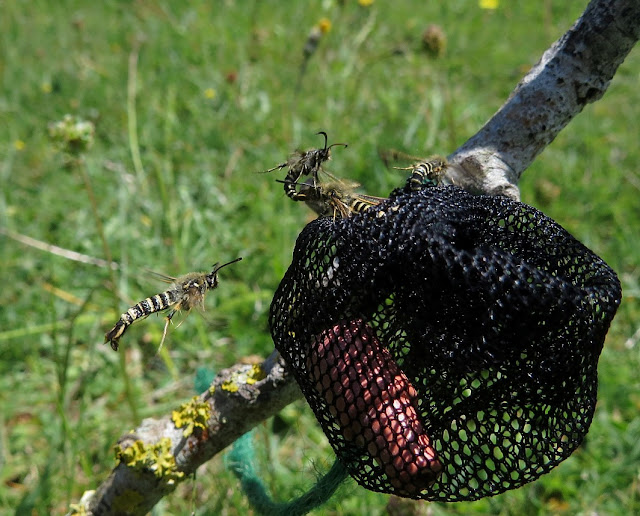 Amorous male Six-belted Clearwings coming to a pheromone lure.
They try and mate with the net and even each other!
They are a very variable clearwing with some tiny and some quite large, they also vary in the intensity of the colouring. 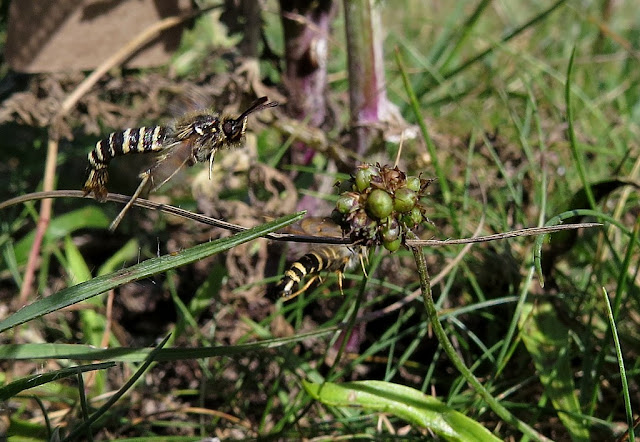 Six-belted Clearwing - Bembecia ichneumoniformis
These were coming to this seed head and attempting to mate with it because the lure had been here previously. 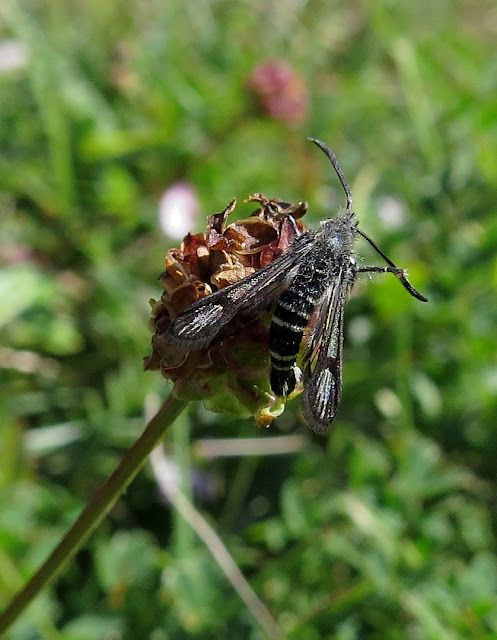 The only one which stopped to pose for a photo was quite a dull colour and
frankly a bit of a tiddler!

Also on the 5th July we saw Red-tipped Clearwing on Stoborough Heath in Dorset. I managed to get an in flight shot of this as well. 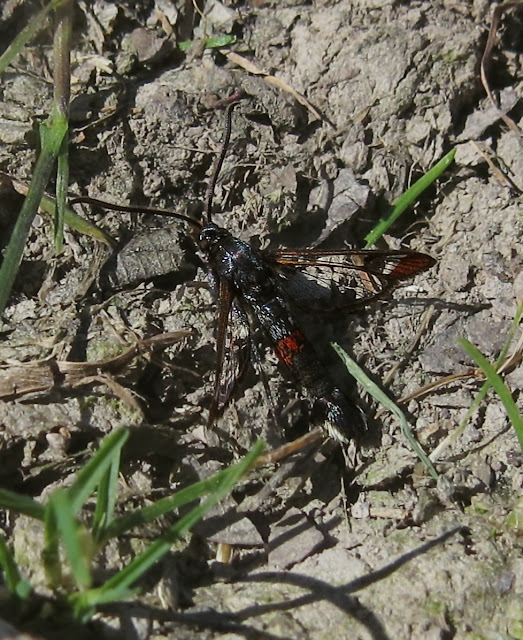 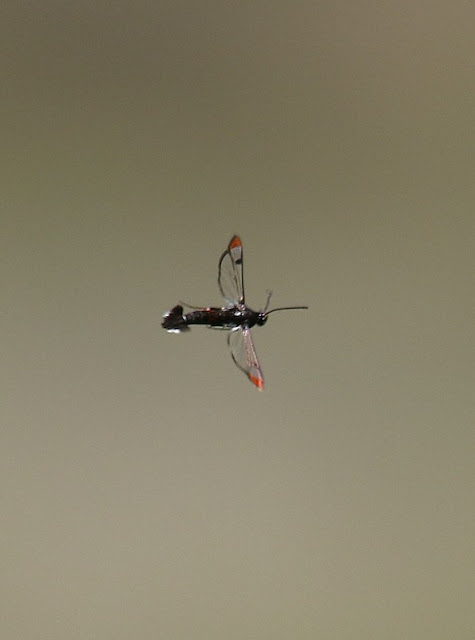 Finally, on July 10th we had visited Rannoch Moor a remote location in Perthshire and were driving along the shore of Loch Rannoch near Finnart. Andy was commenting on how good the ancient birch trees looked looked for Welsh Clearwing and pulled over to the side of the road to take a closer look. We decided to drive a bit further to find a more suitable spot to put a lure but as we pulled away from the verge it became apparent we had a puncture. Whilst trying to change the wheel the jack collapsed and so we had to call for assistance. It was going to take the breakdown driver a long time to get to us at this remote location so 'just in case' we just tied up the lure at the side of the road by the car while we waited. It was windy and cool (typical July weather!) and a large black cloud loomed in the distance. The sun did put in an appearance every so often and amazingly, in one such sunny interval, in it came. A Welsh Clearwing! After cursing our bad luck at getting the puncture we could now marvel at our good fortune in seeing this amazing large clearwing. Even better the approaching black cloud duly arrived, the temperature plummeted and the moth became quite inactive and posed beautifully on a tree trunk for us. Best breakdown ever! 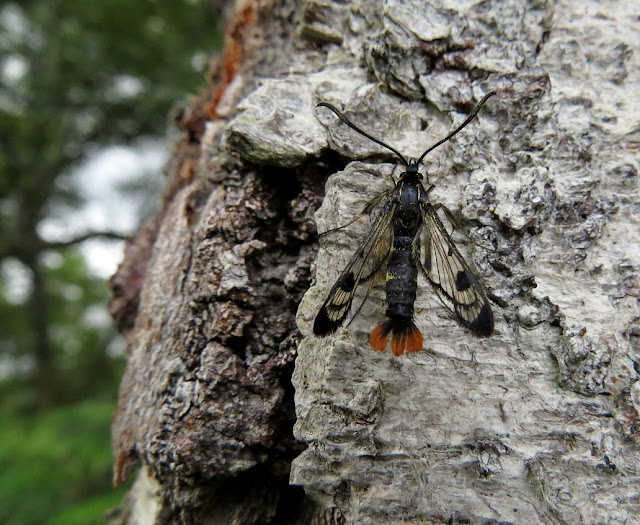 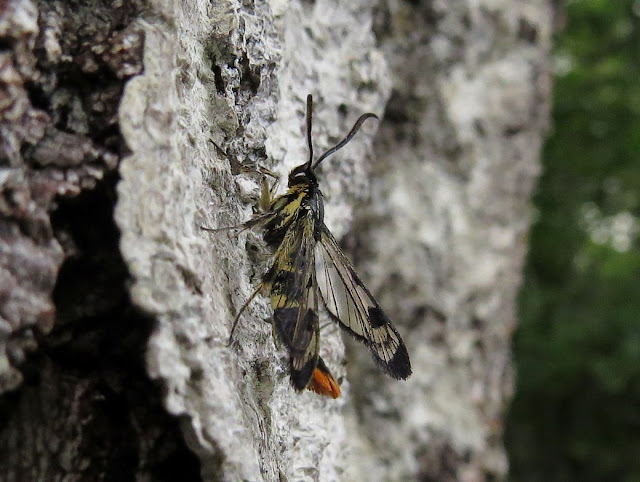 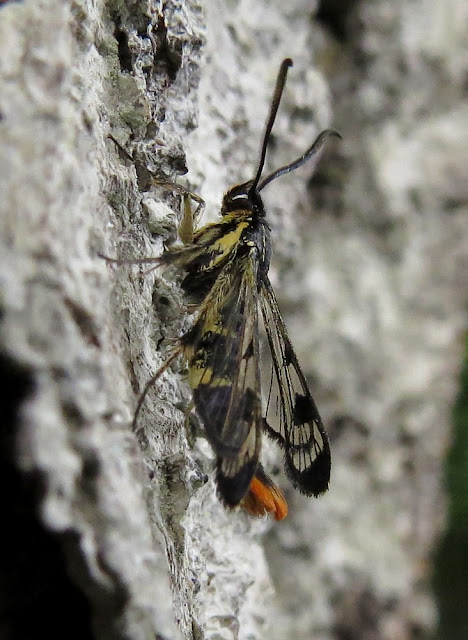 Posted by Karen Woolley at 9:39 pm